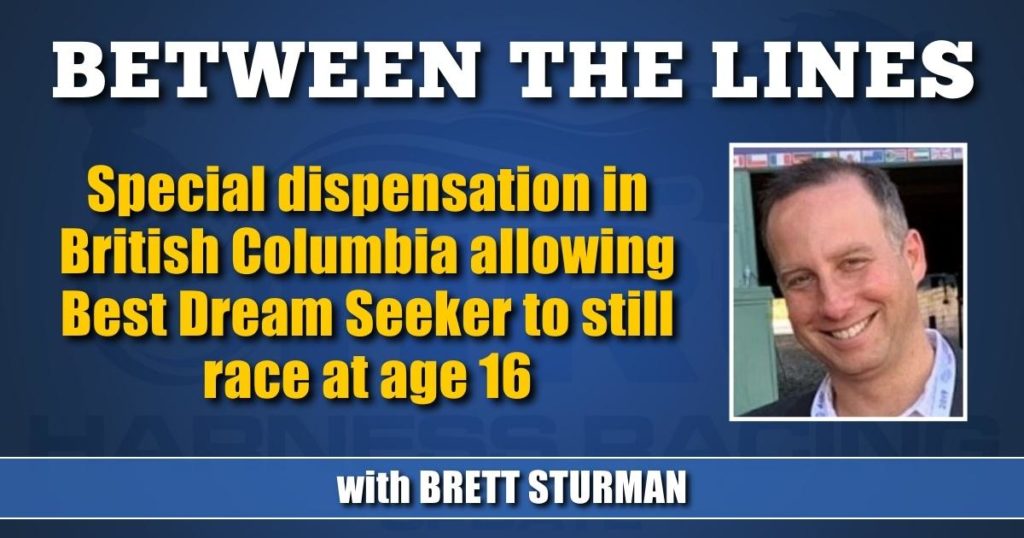 He’s not the only classy warrior still racing past the mandatory retirement age of 15.

United States Trotting Association (USTA) rules state that no horse that is 15 years of age or older is eligible to perform in any race except matinees, county fair races, or races exclusively for amateur or club drivers as sanctioned by USTA. The Alcohol and Gaming Commission of Ontario (AGCO) rules state the same thing, although one exception is British Columbia in western Canada , BC does allow horses to race at 15.

This year, Best Dream Seeker (Cambest) has raced four times as a 16-year-old at the BC track Fraser Downs. For perspective into the length of his still ongoing career, his lifetime mark of 1:51.4 over My Old Friend John and Fireintheshark in the Bluegrass at the Red Mile as a 2-year-old was accomplished three US presidents ago when George W. Bush was still in office.

The question becomes, how is the Best Dream Seeker still able to continue to race at age 16? To help, I spoke with Nigel Holmes, the executive director of Harness Racing British Columbia.

“In December, a ruling was made specifically for (Best Dream Seeker),” Holmes said. “The governing body here, the Gaming Enforcement Branch reviewed it individually and had the horse checked out by a vet. The horse remains fairly competitive, he looks good and he’s well cared for, and so they made a rule variant as an adjustment, and every two weeks – twice a month – a vet will check on the horse and so forth. As of right now, he has the potential to race up until the end of our meet here in May, and we’ll see what happens after that.”

Best Dream Seeker racing at 16 may seem unprecedented, but Holmes points out that this isn’t the first time a horse this age has raced. He notes that in 2018, the horse Prime Time Bliss (Blissfull Hall) raced at Fraser as a 16-year-old. And not only did he race five times at that age, but he also won one of those races, taking a mark as a 16-year-old of 1:59.4. I’d be hard pressed to find any other horse in the modern era of harness racing with a mark of any kind at that age.

Horses aged 15 remain able to race as-is based on province rules where the age range is 2 through 15, and the rare occurrence of horses racing past that age will continue to be determined on a case-by-case basis.

Not far behind Best Dream Seeker in the age department is another ultra-tough gelding, Dream Out Loud N. A millionaire who will make his 300th career lifetime start tonight at the Meadowlands, he’s now 15 years old. Now eight years removed from his 1:48.4 record taken at Harrah’s Philadelphia as a 7-year-old, he’s able to still race in amateur races such as the GSY Series conducted at the Meadowlands.

Dream Out Loud is coming off a season in 2021 in which he won an amazing 21 times in 39 starts, good for earnings of $86,790. In that process, he was claimed 18 times. He closed out the year with 10 consecutive wins, overwhelming $10,000 claiming competition when the year winded down, the threat of him being claimed became less. Already, he has taken a relatively impressive mark as a 15-year-old in 1:56.3 coming at Freehold last month in another GSY event.

Both Best Dream Seeker and potentially even more-so Dream Out Loud N are examples of a case that could be made to expand past the age of 14 when it’s mandatory that horses retire (with exceptions as noted).

For example, Dream Out Loud N is essentially competing tonight in an actual race that’s going to go in a fast time. And the race is a pari-mutuel one. He’s only even in the race on an also-eligible condition of a $12,500 claiming tag, the only horse in the race that can be claimed – as a 15-year-old.

I’m not sure of the overall intent in the rules of allowing for an exception for amateur or fair races etc., but it’s not like this race at the Meadowlands is going to have any resemblance to an afternoon race at the Bloomsburg Fair that goes in a time of 2:05. And don’t misunderstand – I don’t have an issue at all with the horse racing. In fact, he should still be racing, based on his competitiveness. But what’s the difference in racing in a race with a “GSY” designation compared to any other standard condition on the card?

Granted, it’s not as if there’s an overabundance of horses that make it to the end of their 14-year-old season, let alone in form where they should be able to continue onward. But it does happen and each year there are a handful of horses that would be good enough to continue on for at least another season.

Take Statesman N for example. Similar to Dream Out Loud N as a New Zealand-bred who also took his lifetime mark at Philadelphia many years ago and is close to that horse in career earnings at just under one million dollars, he won eight times last year as a 14-year-old including a seasonal mark in 1:52.4 at the Meadowlands. This year, he too is competing as a 15-year-old in the GSY Series races.

If these horses and others are able to compete at ages older than 14 in pari-mutuel events conducted at tracks such as Fraser, Freehold and the Meadowlands as examples, perhaps it’s time to consider an adjustment to the standard at which horses can continue to compete without exceptions.