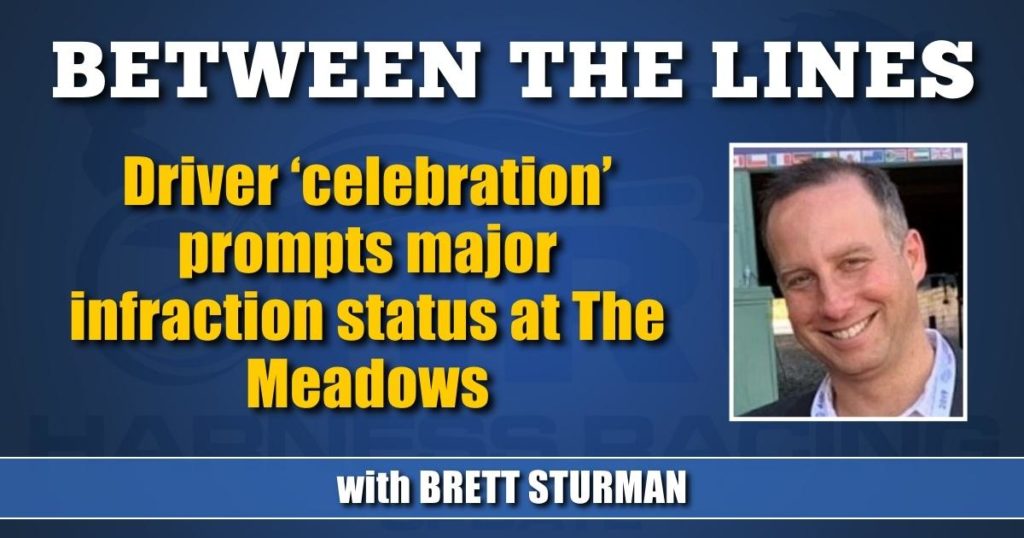 During a race towards the end of last month at The Meadows, driver Dan Rawlings was fined of $500 and was issued a five-day driving suspension. Driving the horse Stay In Your Place in race 10 of an otherwise ordinary Thursday afternoon two days before Christmas (replay here), Rawlings raised his left arm in victory and waved approaching the race’s finish.

If you didn’t know any better, you wouldn’t have thought anything of it.

The judges, however, didn’t quite see it that way. Not only was Rawlings fined and suspended for the infraction deemed “conduct detrimental to the best interest of harness racing,” but he was also placed on probation for the entire calendar year of 2022, along with being put on notice in the ruling that similar actions could lead to a full suspension or revocation of his Pennsylvania state horse racing license.

Is there more than meets the eye behind the seemingly wild excessive penalty? For his part, Rawlings certainly thinks so. According to his personal Twitter account, Rawlings says that the race 10 wave was directed to the judges in response to a $500 whipping violation he was to incur from the immediately prior race 9; a race in which he delivered a hard-earned win for 3-5 favorite Big Bang Bang.

If $500 seems like a lot for the violation, it comes from an inappropriate use of the whip ruling from Nov. 9 when judges stated they were increasing Rawlings’ penalties for whipping violations from $200 to $500, due to the number of cited infractions.

Tweets from Rawlings also include a “bias and vindictive” description of a judge, and he indicates that he has retained an attorney in response to his treatment. Whether bias exists against Rawlings or not is another story, though recent rulings levied against him are at least noteworthy.

To me, the issue comes when you actually take the issued ruling at face value. As support for the conduct detrimental infraction, the judge’s ruling states, “Mr. Rawlings made a gesture that was unprofessional, unsafe and confusing to the wagering public, which reflects negatively on the sport.”

Beginning with the unprofessional description, I suppose this is the one that could be debated most depending on who the wave was directed at. I could see it being a form of taunting if directed at another driver, but it wasn’t. Drivers make similar poses all the time in larger moments, so what if Rawlings was filled with exaltation for any personal reason? Does it matter why?

Now, if Rawlings were waving towards the judges then I indeed would consider that unprofessional, along with poor judgment.

On the reason of unsafe, this one is less believable. Rawlings was the better part of a length clear of his next closest pursuer, the race no longer in doubt and mere yards away from the finish. He didn’t do anything dramatically different than other drivers do when celebrating a win. Would his behavior still have been deemed unsafe if the same thing happened in the Adios instead of a lesser race the day before Christmas Eve?

The characterization of the gesture being confusing to the wagering public is the furthest reach of all. As a longstanding member of that public segment, I don’t see at all where confusion arises. I see far more ambiguity in efforts of driver carelessness than I do with a driver celebrating a well-meant win, regardless of who the finish line theatrics were meant towards. Add arbitrary pylon infractions and inconsistent interference decisions to the list of more confusing race occurrences to the wagering public.

All told, the ruling stated that these actions reflect negatively on the sport. Do you really want to know what reflects negatively on the sport? When at the same track, the positive post-race drug test of a 3-year-old champion that occurred in June isn’t released to the public until six months later. Which, by the way, that Class 3 positive came with the same $500 fine as Rawlings’ harmless touchdown celebration.

It’s hard to believe the ruling, fine, suspension and further threats are a precedent-setting decision against broader driver celebratory conduct, but rather a tit-for-tat response to whatever issues exist at the track between the judges and Rawlings that was further exacerbated when Rawlings waved. Provided that’s remotely the case, then let’s not use otherwise legitimate issues as cover for issuing a ruling when at the same time there are real issues detrimental to the sport that can be looked at.