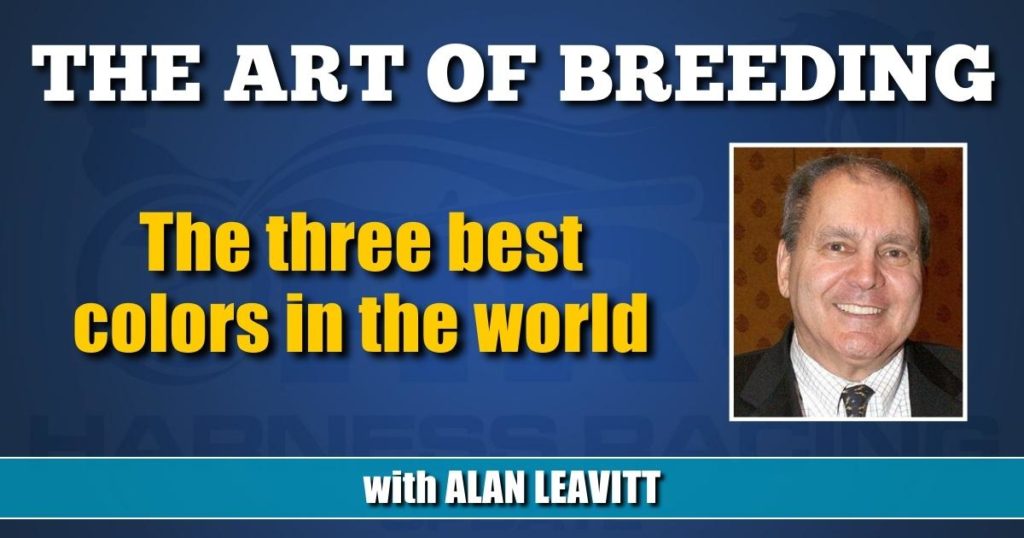 The three best colors in the world

By now most mares have already been booked, and the popular stallions all have full books. But if you still have one or more mares that aren’t committed, herewith a few thoughts that might be helpful.

On the assumption that you’re breeding for the yearling market, first-year horses always command interest in the sales ring, as a generality. Beyond that point, however, one hopes that the yearlings he or she sells will go on and race well, so there are other considerations in evaluating a potential sire.

By now you’re probably tired of hearing that 2-year-old racing brilliance is the best indicator of a horse’s sire potential, but it is. A further refinement of racing class is gameness. Look for a 2-year-old that liked the front end, one who wasn’t afraid to wire the field, or die trying.

Good sires come in all sizes, but whether large or small, you want a sharp headed horse, with a big, full, expressive eye. The only exception here is that most trotters now come with big ears. How that happened is beyond me, but it’s now the norm.

Here, a digression RE: selling yearlings. A smart breeder will enhance the appearance of his sales stock by rubbing a little baby oil on their nostrils, around their mouths, and around their eyes. That’s especially effective when they’re being shown to potential buyers, and in the sales ring itself. And if you happen to have a saddle horse background, you’ll also use a sponge and baby oil on the inside of their ears.

Which brings up another small but useful point, the importance of trimming a yearling’s ears carefully. Again with the show horses, anyone from that world can make even the biggest yearling’s ears look sharp and proportionate. When you’re doing that close kind of work with clippers, you need a little can of kerosene to periodically dip the clippers in and keep them cool.

Some of the best horsemen in our breeding and yearling game were influenced early on by the saddle horse business, especially at Castleton Farm in its heyday. Bill Brown is gone now, but he learned his meticulous horsemanship from Earl Teater, the great saddle horse trainer at Castleton. Francis Dodge was the owner of Castleton in its glory days at the horse shows, with that division of the Castleton operation going by the name of Dodge Stables.

Lovely Rikki Caldwell (nee Van Lennep) was part of her mother’s Dodge Stables when she was a young woman and rode Lover’s Sensation to several world championships.

Besides Bill Brown, Francis McKenzie started at Castleton, and he then went on to manage Walnut Hall Stud and Almahurst Farm. Albert Adams, another crackerjack horseman, learned his trade under Francis at Almahurst. And another top horseman, Art Zubrod, learned his trade as a saddle horse trainer before switching to standardbreds.

The saddle horse influence can still be seen in the way the Peninsula yearlings always go into the sales ring with their manes and foretops in long, crisscrossed braids, like all five gaited show horses.

Back to picking a sire, take a look at the horse’s pedigree. Herein lies a contradiction in terms; every stallion is an entity unto himself, and his pedigree is meaningless except in one possible exception. That exception occurs if the horse in question happens to be closely bred, i.e. inbred.

Inbred means that the same horse’s name appears twice when the sum of those two generations in which it appears is six or less. Working from a fallible memory, one current horse that comes to mind is Captain Crunch, who is 3 x 3 to Artsplace. It’s not my intention to write ads for anyone’s stud, but that close cross to a truly great racehorse and sire can only be a benefit to Crunchy.

We don’t breed pacers, so I’m not promoting any of our stock, but don’t be surprised if Crunchy hits as a sire.

Along the same lines, my dear friend Lina Alm, from Sweden, pointed out to me the close breeding of both Varenne and Viking Kronos. Varenne is one of the greatest trotters who ever wore a bridle, and equally overwhelming as a sire.

I’m not as familiar with the exploits of Viking Kronos, but if Lina says he’s great, that’s good enough for me.

Varenne’s pedigree is almost entirely American blood, with the sole exception of his dam, whose first two sires on tail-male top line are Italian-bred. His dam’s grandsire is Sharif Di Iesolo, a legendary racehorse in Europe. And even he is by an American-bred horse, Quick Song, by Victory Song.

Varenne is inbred 3 by 3 to Speedy Crown, and line bred 4 by 4 by 4 to Star’s Pride. Here a little immodesty. This kid bred and sold as a yearling Varenne’s sire, Waikiki Beach, and syndicated and stood Speedy Crown, who, pound for pound, was the best trotting sire we’ve ever seen. Who was it who said, “If you’ve got it, flaunt it”?

Viking Kronos, while not quite as closely bred, is 3 by 4 by 4 to Star’s Pride. When I look at the tail-mare, or bottom line of his pedigree, it brings back memories. His second dam is Viking’s Venus, by A.C.’s Viking and out of Carmita Hanover.

A.C.’s Viking was the second name trotting stallion I stood at Lana Lobell, the first being Noble Victory. I still have a clear picture in my mind of the trainer, in his racing colors, who approached me at Roosevelt one morning right after the quallies. He said an owner had a nice trotting mare, and he wanted to breed her to A.C.’s Viking. I said, sure.

What happened next was Carmita Hanover was shipped to Lana Lobell the next day, and she got off the van hot in season. Jim Harrison, who was running the farm, called and said he didn’t like to breed any mare before he had a signed booking contract.

I assured Jim that there wouldn’t be any problems, so Carmita Hanover was bred to A.C.’s Viking, breeding contract to follow. The result was Viking’s Venus, who won all of $72, and then produced Conch, who made up the deficit by earning $485,889, and then producing Viking Kronos.

Somewhere in all this maybe you can find a clue that will help you breed a world beater, whether or not you braid his or her mane when sale time comes. But if you do, just remember that the best colors for mane braiding and everything else in this world are red, white, and blue.

In my piece last week, I wrote at some length about things that had occurred at The Hambletonian Society. I was wrong to do so, and I extend my apologies for this indiscretion to my fellow Society members.