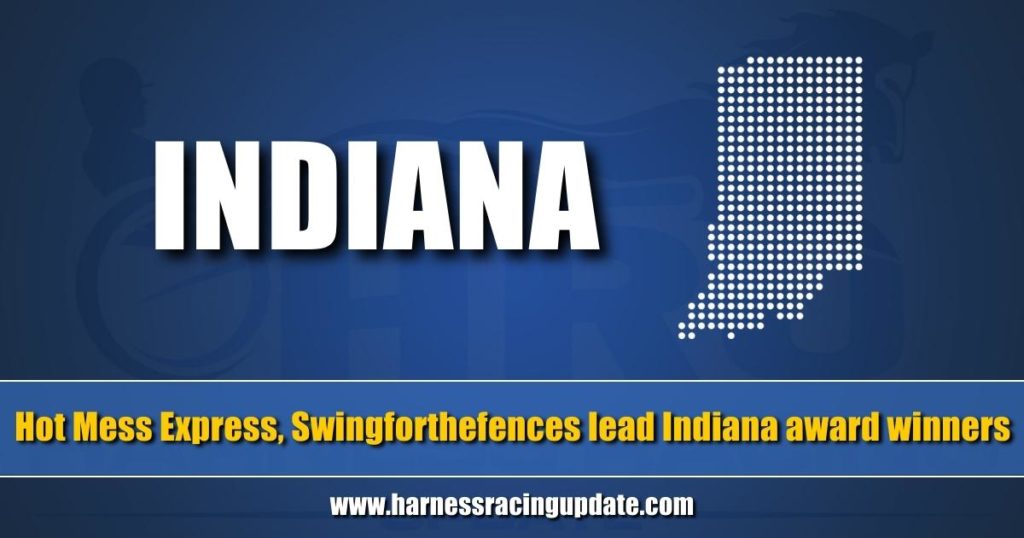 The top performers of the 2021 Indiana racing season were feted Saturday night (Jan. 22), with Hot Mess Express and Swingforthefences taking home multiple awards for their sophomore exploits. The banquet, sponsored by the Indiana Standardbred Association, Standardbred Advisory Board and Harrah’s Hoosier Park Racing & Casino, was held at the Embassy Suites Conference Center in Noblesville, IN.

Sam Bowie’s Hot Mess Express won 13 of 16 starts in 2021 for trainer Tony Alagna, netting the connections Pacer of the Year honors in Indiana. Banking $631,634 and collecting an Indiana Sires Stakes Super Final victory along with a pair of scores on the Grand Circuit, the Panther Hanover filly was also recognized as Indiana Sires Stakes divisional champion and 2021 Indiana Sired champion. Bred by Amy Giberson, Madeline Giberson and Ethan Giberson, Hot Mess Express was primarily driven by John DeLong in her Indiana starts.

Dean Gillette Indiana’s Trotter of the Year for 2021 is Swingforthefences (Peter Wrenn) .

Dean Gillette Hot Mess Express (John DeLong) has been named Indiana’s Pacer of the Year for 2021.

Equally impressive were the achievements of Swingforthefences, 2021 Trotter of the Year in the Hoosier State. The Swan For All gelding, trained by Melanie Wrenn for owners David McDuffee and L&L Devisser LLC, hit the board in 19 of 20 seasonal starts, annexing 12 wins. Driven by Peter Wrenn, the 3-year-old trotter picked up victories in the $270,000 Indiana Sires Stakes Super Final and Erskine Trot, and ventured outside the state to claim victory in a $156,300 Matron Stake division. Swingforthefences finished the campaign with $551,124 in earnings. He was also named Indiana Sired champion for his division.

Trace Tetrick was named Pari-Mutuel Driver of the Year in Indiana for 2021, and Tyler George was awarded Pari-Mutuel Trainer of the Year honors. The award is the eighth consecutive for Tetrick, who also secured his eighth straight Hoosier Park driving title last season. He finished the year with 403 wins at the Anderson oval. Tetrick ranked fourth in wins in North America with 559 victories and just over $6.4 million in earnings. George has been acknowledged as the top trainer in back-to-back seasons. Last year he registered his second Hoosier Park training title with 119 winners over the course of the 160-day meet. George finished 12th among North American trainers last season, sending out 174 winners and accumulating over $1.7 million in purse earnings.

Doug Rideout swept both the Indiana Fair Circuit Driver of the Year and Trainer of the Year categories. He tallied 85 winners at the fairs in 2021 and conditioned 68 winners including Indiana Sired Fair Circuit divisional champions Honorable Lady and Rojo Man. He also trained and piloted freshman colt Hand Dover Dan to a Governor’s Cup championship at the Indiana State Fairgrounds. Annually one of the top trainers and reinsmen on the Indiana fair circuit, Rideout last claimed both categories in 2008.

Swingforthefence’s success garnered Small Breeder of the Year honors for Concord Stud Farm LLC. The Cream Ridge, NJ breeder was represented by three Indiana starters in 2021, with Swingforthefences leading all trotters in earnings in the state. Victory Hill Farm, Inc. added another Large Breeder of the Year award to their long list of accolades. It is the seventh straight year the LaGrange, IN.-based breeder has earned the award. Little Rocket Man, a winner of nearly $260,000 last season, served as the top performer. A group of 81 Victory Hill-bred starters earned $2.5 million last season, with $957,143 amassed in Indiana.

Progeny from Swan For All enjoyed another strong campaign in the Hoosier State, earning the stallion ISS Trotting Sire of the Year honors. Standing at Victory Hill Farm, it is the fifth consecutive year he has earned the title. Led by Indiana Sires Stakes Super Final winners Swingforthefences, Shirley Goodness, Whata Swan and M-M’s Dream, Swan For All produced 118 winners from 168 starters, racking up 403 victories and $6 million in earnings.

Fellow Victory Hill stallion Rockin Image added another ISS Pacing Sire of the Year credit to his resume. Previously recognized in 2015, 2017 and 2019, Rockin Image produced 232 winners from 292 starters in 2021, with that group collecting 820 trips to the winner’s circle and $8.2 million in earnings. He was represented by Indiana Sires Stakes Super Final winners Rockin Nola, Little Rocket Man and Dalby Hanover.

(Always A Virgin—Star Of The Show)

2021 Indiana Sired Champions (based on earnings)

Trick Of The Light