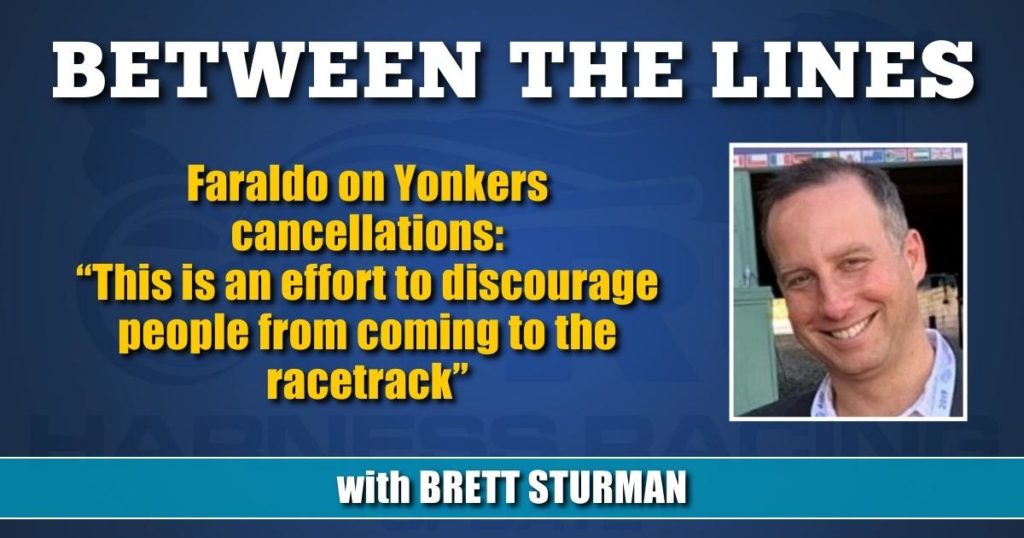 Faraldo on Yonkers cancellations: “This is an effort to discourage people from coming to the racetrack”

The president of the Standardbred Owners Association of New York said Yonkers is trying to “reduce or eliminate racing” to “enhance their bottom line. I certainly believe it’s by design.”

Continuing with the maddening trend in recent years of race cancellations during winter months that plagues Yonkers Raceway, the track again was forced to cancel its last two live race cards from this past Thursday (Jan. 20) and Friday (Jan. 21).

The track issued a tweet on Thursday when racing was canceled after the first race. On Friday, the track issued another tweet where it cited “extreme cold and winter conditions” as reason for cancelation of the Friday card. Cold, is not totally out of the realm of normalcy for January in the region, but the Meadowlands had no issue conducting live racing less than 20 miles away.

Joe Faraldo, the president of the Standardbred Owners Association (SOA) of New York, immediately refuted the record for the stated reason on Friday’s cancellation.

“It was not for the cold, let’s get that straight,” Faraldo said. “It was because the track condition is frozen, it has frost in places, and it’s very dangerous. It’s an unsafe track to travel over. When I spoke to the director of racing today, he said that it’s going to be cold, and excuse my language but I don’t give a rat’s ass about it being cold – we’ve raced in the cold before. It’s the track condition.”

Asked for a comment, Alex Dadoyan, the director of racing for Yonkers, sent the following statement:

“After the conclusion of the first race on Thursday, January 20, 2022, the presiding judge made the decision to cancel the remaining races as a result of freezing temperatures that froze portions of the track making them unsafe for racing. The health and safety of the drivers and equine athletes must always be the priority and as such, Yonkers Raceway concurred with the presiding judge to reschedule the race day to a later day with warmer weather.

“The track was evaluated on Friday morning, and it was again determined that the frigid temperatures were still impacting track conditions and making the track surface too hard to safely race. Again, with the health and safety of the drivers and horses a priority, rescheduling the Friday races to a warmer weather day was determined to be the safest course of action. Yonkers Raceway will petition the New York State Gaming Commission to reschedule the race dates.”

As Faraldo has stated publicly prior, he attributes the track’s poor condition almost solely to neglect.

“MGM/Yonkers is laying off people, they refuse to have track people onsite and laborers to take care of the track on days that we do not race, which includes Saturday and Sunday where there is no one there. So, if the weather changes from a thaw to a freeze and you don’t have anybody working the track during that period of transition, then you’re destined to have a track that’s unsafe. I’ve been complaining about this to the gaming commission for quite some time in that it’s not necessarily an issue of track material but it’s having competent people to work the track and to also be available to work the track. And MGM/Yonkers in the interest of saving a buck is not having those people on during the periods of time when normally a track is maintained. And that’s why the Meadowlands can race, Northfield can race, and we can’t.”

The recent cancellations are shades of this time almost exactly one year ago, when Yonkers was forced to cancel four consecutive race cards after a snowstorm due to inability to remove the snow from the track.

What makes these recent cancellations more frustrating due to poor track conditions — even if you believe the weather explanation from Friday, Thursday was acknowledged as a track issue — is that just six months ago the track underwent an ambitious resurfacing project.

“It’s not the resurfacing job at all, the track was fine,” said Faraldo. “The gaming commission representative said it right. His analogy to me was that, ‘If you don’t maintain a golf course, you don’t have a golf course.’ And it’s the same thing with a racetrack. If you don’t maintain it – if you hire people that are going to save you money and they’re going to do whatever you want them to do such as lay off people or say that we don’t need these people, this is what happens.

“I’ve been there on a Saturday and there’s nobody there. The gates are locked. There’s not one piece of equipment that’s moving on that racetrack. So now if you get a thaw over the weekend, there’s nobody to take care of this. And then they think that you can come in on Monday and rectify the situation in a day. They think you only maintain a racetrack on the days you are racing. That is one of the stupidest things I’ve ever heard in my life.”

Faraldo is aware it may sound squirrely, but he believes the situation at Yonkers goes beyond plain ignorance and that there is something more sinister at play.

“I’m telling you, all of this is by design,” says Faraldo. “This is an effort to discourage people from coming to the racetrack and it’s to make people who want to send some of these real good horses here, to discourage them so that we can cut down on racing and not have enough horses to fill 240 race days. Because if they can reduce or eliminate racing, they enhance their bottom line. I certainly believe it’s by design. They know what they’re doing wrong and they continue to do it.”

For Faraldo, issues at the facility go well beyond only the track surface.

“I just got a call that the plumbers union is filing a grievance against them because they don’t want to have plumbers onsite four days of the week,” Faraldo said. “So, there’s no plumber on the racing side on Saturday and Sunday when they’re not racing – you see the MO here? – and then two days during the week. Those plumbers are responsible for those long heating units that heat up these racetracks like Freehold and Yonkers. I called a man to make a fix and he said that he’d love to fix it for me, but that he was the only plumber allowed to work that night, and regulations are such that an additional person would have been needed to hold the ladder. So, they won’t pay that second guy, and the first guy therefore can’t do his job.

“Yonkers did some very good promotions and shows when we had the Night of Champions and they catered to the people that wanted to come. This past year, they did not even open the Empire Terrace for sit down dining. Our contract says that you must have the Empire Terrace open on the Night of Champions and five other nights throughout the year that we specify. So now, the Night of Champions will not be held at Yonkers; it will be held at Tioga Downs. That Yonkers stopped taking that responsibility while generating 68 per cent of the money for the entire sire stakes program is in my opinion a total disgrace. This is a planned disintegration of racing into whatever they can get away with.”