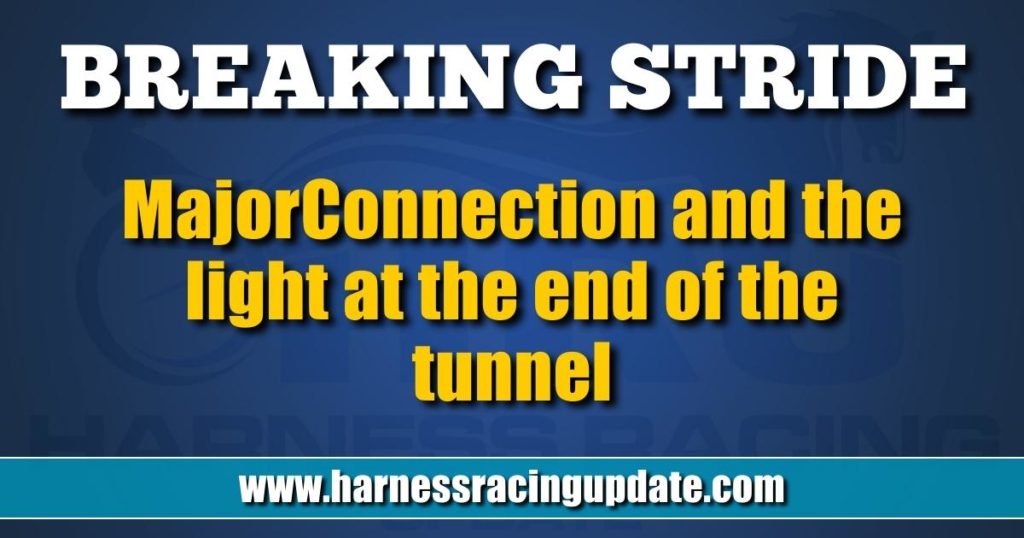 MajorConnection and the light at the end of the tunnel

I am a 37-year-old woman named Sarah trying to get comfortable under a plaid quilt blanket in the back seat of a pickup truck destined to get repossessed. The darkness of the apartment parking lot, the broken light on the pole and the rain might allow me to sleep through the night undisturbed. My swollen right knee aches, no doubt some ligament damage. I have not eaten much besides potato chips and beef jerky for two weeks. I think I lost a few pounds, which would be good.

Dr. Contour, my psychiatrist at the VA hospital, said that I was borderline OCD with possible schizophrenia. Well, he didn’t say it out loud, but I got the drift. And don’t let anyone trash the VA hospital system. They do the best they can. After only three years in the service, the VA door is always open, and I never pay a penny. Most of us are just hard to fix.

The past four years were remarkable.

I don’t know why MajorConnection suddenly woke up one morning and decided to be a real racehorse. Nobody knows, but this trotter plays a leading role in this story. For his first 15 starts, 10 starts at age 2 and five at age 3, the bay colt just clomped around, picking up small checks for the owner, Margret Phelan, a woman who looks like the green witch in The Wizard of OZ. Mrs. Phelen’s trainer is Ross Wilson. I groomed Major for every start. He was just another racehorse, a less than mediocre racehorse. Although he was race timed in two minutes, two and two-tenths of a second, he never won a race in fifteen tries. I didn’t like Major anymore or any less than the five other horses I cared for every day.

My boyfriend sometimes slapped me, but let me say this, he never punched me with his fist or hit me with a table lamp. On April 17, four years ago, we were both drunk when he slapped me harder than usual, and my nose began to bleed and kept bleeding. I used a whole box of Kleenex, made quite a mess, and either fainted or passed out.

I woke up in an ambulance, but I was foggy. When I woke up again, I saw daylight through a window and felt a wad of cotton in my nose. They did not admit me, but the doctor stashed me in a bed in the emergency section. My boss, Ross, picked me up around noon. Ross is a good guy. He’s a family guy, but we aren’t close. Suitable grooms are hard to find, so he tolerates me and my personality.

Ross and Margret Phalen don’t race their horses at the fairs. Honestly, Major had yet to win a race and did not look like he could even make money racing at fairs. I heard them talking early in June.

Ross said, “MajorConnection doesn’t look like much. I mean, he looks fine, but he doesn’t seem to have the heart. He might be of use to someone who is going to race fairs, but this is probably the time to cut your losses with this one.”

She said, “Maybe we could list him on the Internet.”

Ross nodded. “Possible, but I don’t think you will get more than a couple thousand, and the website gets a piece of that. But your training bills will stop, and it would be addition by subtraction.”

I swear I don’t know what happened at this moment. I heard my voice saying, “I’ll buy Major.”

There was no plan. I don’t think I ever considered this action unless it bubbled around deep in my subconscious. It was like I heard somebody else talking.

We worked it out. I never actually paid for MajorConnection. We just transferred the ownership papers. Ross took a cut from my paychecks, and I began bunking in the tack room and feeding the horses in the morning for payment. Staying at the stable was Ross’ idea. He felt I needed a change of routine, but he probably felt that what I really needed was a brain change.

Since I only have a groom’s license, we left Ross as the trainer of record. Willie Davenport, a good guy from the next barn, had two pacers racing at the fairs. When Major was eligible for the same fairs, I hitched rides from Willie and his horses. Willie drove Major at five fairs that summer, and Major earned $4,843. Earned is a stretch. We drew into fields when only two other colts entered, so we got second and third money for just showing up.

The mystery began as the summer wound down. Fairground racing was over, and MajorConnection was 0-20. To any sane person who understands horseracing, Major was noncompetitive. Sending him out to race at Delta Downs, a real racetrack, looked like a hopeless assignment. But hopeless is a word I had heard all my life, so I entered Major, and he raced well, very well.

The race that changed everything was a maiden, a race for horses who had never won a single race. Major came off the gate and drifted back to the rear of the field. He shuffled along. He was still last at the halfway point when suddenly he popped his head up and began trotting up a storm. Major passed them all and won by a couple of lengths in 1:59. I was so shocked that Willie had to nudge me to get into the golf cart and go to the winner’s circle.

Standing for the photo, the driver, Randall McQueen, leaned over and said, “Not terrible.”

That race was incredible. Maybe it was a fluke, but it was awesome. Major and I won $5,100.

Did you ever hear the saying that good things seem to happen in threes? It might be true.

A month before Major’s big race, Dr. Contour prescribed me a different kind of antidepressant, one pill per day that he said to take around suppertime. I filled the prescription right at the VA. The first week nothing happened, I was still jittery, snappy, and scared, but around the start of the second week, a little at a time, I was not so jangled.

The morning after MajorConnection won his first race, the third thing happened. Margret Phalen must have parked her broomstick outside. She strode into the barn in my direction. Aside from nodding hello, we never had a conversation. My back stiffened. I figured she wanted Major Connection back.

She said, “Congratulations on Major’s win, what a thrill.”

“No, no, of course not. The reason I’m here is to get you out of that cot in the tack room. You probably know that my husband is a developer. He just finished an apartment complex less than a quarter-mile from here. The project is nothing fancy, built for middle incomes, most of the tenants will work at the new Amazon complex. We employ a backup maintenance person on the premises. We can offer you a small unit at half the rental price if you are interested. The position requires little and should not interfere with your racetrack work.”

Now, this was a trifecta. The medicine was working. MajorConnection raced a shocker and a home of my own. After years of couch crashing, splitting with roommates, shelters, and army barracks, my own home seemed like a dream.

I will not bore you with the details, but here is the big picture. MajorConnection raced well for two seasons. He was not a world champion but a horse that climbed the racing classification and was a steady check getter. The new antidepressants made a huge difference. Living in my tiny apartment, free from the stresses of my previous life, was different, not perfect, but different. I even began to go to Trinity Baptist Church and made a few friends.

But this ain’t no fairy tale or Hallmark movie. I threw it all away. Doctor Contour calls the self-destructive way I act using fancier terms. He blames things on my childhood and trauma, but it doesn’t matter.

My first big mistake was stopping the antidepressant pills. I was getting a little ahead of myself and didn’t think I needed them. In a brilliant move, I started drinking again. Then I sold MajorConnection in a lousy deal. I bet you thought this would be a sappy love story between Major and me, but I sold him without blinking an eye. Then some half-assed dealings with the same boyfriend who slapped me. There were debts, an arrest. I lost the apartment.

So here I am. I am pulling the plaid blanket up to my chin, ready for a long night in the rear seat of a truck – same old, same old. But I am smiling. I am not the same old Sarah. I know the pills work and have already resumed taking them. I know that I can live alone and make friends, and I now have a little faith to fall back on.

Do you know the saying about the light at the end of the tunnel? That always sounded like BS, but these past few years changed things. MajorConnection came along. Now I know the light is real, and I believe I can reach it again.