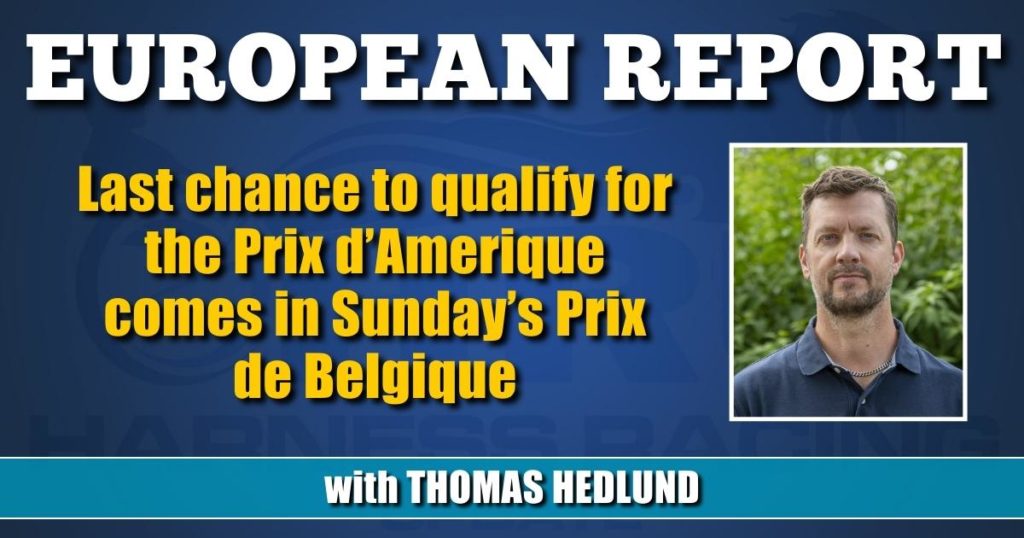 The $135,000 Prix de Belgique is set for Sunday (Jan. 16) at Vincennes. As always, the race falls two weeks before the Jan. 30 Prix d’Amérique in Paris. That makes the Prix de Belgique the last chance for horses to qualify for the big race.

Fifteen trotters are in the race and the most merited, at least in terms of lifetime earnings, is Jean-Michel Bazire-trained Davidson du Pont, who practically has his spot in Prix d’Amérique already due to his high bank account.

Last Sunday (Jan.9), some big races were on the Vincennes’ race card and Bazire presented a Finnish bred 4-year-old in perfect condition in the $135,000 Prix Charles-Tiercelin.

Dusktodawn Boogie (Lexus Font) finished strongly three wide during the race’s last half-mile and even though Bazire started the attack from fifth over, the filly had speed enough to disarm the front horses in the stretch. Leader Ideal Ligneries looked like he would claim the trophy in mid-stretch, but Dusktodawn Boogie put her nose first. The mile rate over 1.3 miles was 1:55.4.

Philippe Allaire’s 3-year-old Just A Gigolo won the $135,000 Prix Maurice de Gheest in a stakes record of 2:00.4 over 1.6 miles and the son of Boccador de Simm claimed his sixth win in seven starts. Just A Gigolo came to the lead with a mile to go and driver Franck Nivard had everything under safe control on his way towards the wire.

Allaire dominates the big races for younger horses in France and Sunday marked his eighth career victory in the Prix Maurice de Gheest.

The biggest race on the Sunday card at Vincennes was the $170,000 Prix du Calvados, for horses racing under saddle. Early leader Fadu du Chene had some 30 meters advantage to his opponents when the judges at Vincennes decided to disqualify the horse with a kilometer to go in the 1.6-mile-long race. The judges wasn’t happy with the way Fado du Chene gaited so jockey Paul Philippe Ploquin had to leave his position. Instead, Fantaisie (Un Mec d’Heripre) was the leader of the gang. And Fantaisie held all the way, even when Jerry Riordan-trained Zarenne Fas seriously challenged over the home stretch.

Seven-year-old Fantaisie came home in a mile rate of 1:57.1 and she is now ready for the Prix de Cornulier next weekend. The same goes for Zarenne Fas and bronze medalist Bilooka du Boscail.