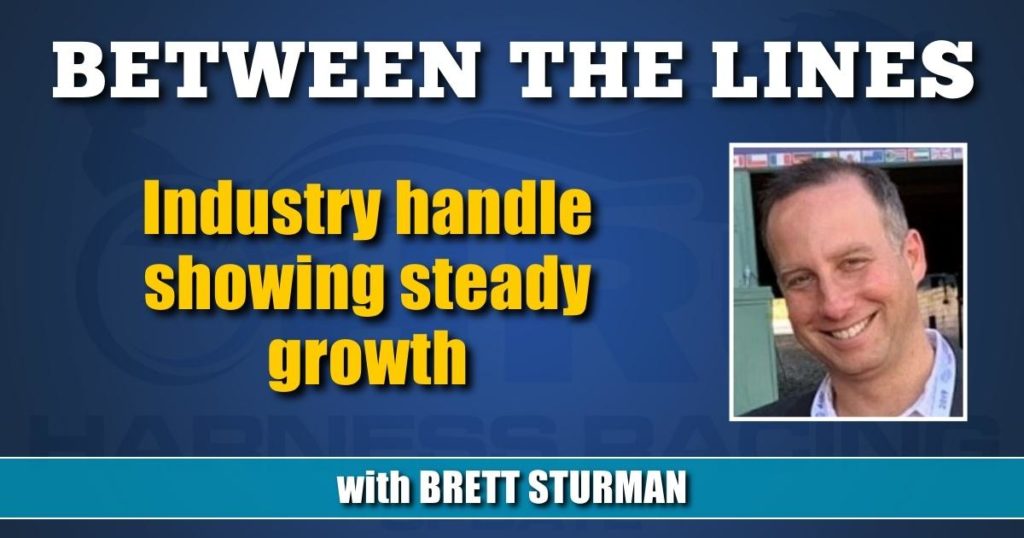 In 2021, amounts wagered on harness races conducted in the U.S. continued positive trends established during the re-emergence from shutdowns in 2020. While impacts from COVID-19 wreaked havoc for horsepeople in the U.S. industry in 2020 and in Canada both in 2020 and again this past year, handle has posted quite notable gains, relative to years immediately prior. It’s a fascinating dynamic.

From the United States Trotting Association’s economic indicators data for 2020, the handle on a per-race average was down 7 per cent from 2019 prior to the stoppage of racing in March 2020. Once racing resumed, the per-race metric was up 20 per cent for the remainder of the year. That remarkable pre-to-post shutdown swing held true in 2021, where the per-race handle average from 2021 to 2019 was up 18.42 per cent. The total amount wagered of over $1.62 billion in the U.S. in 2021 was also up nearly 14 per cent when compared to 2019, the most recent year not dramatically impacted by a reduction in race dates.

For a better sense of what those numbers mean, the thoroughbred industry can be used as a reference point. Naturally, total handle of over $12 billion in 2021 from that side of things dwarfed the total wagering amount posted on the harness side, but percentage wise the numbers are more interesting.

In 2021, of the $1.62 billion wagered in harness racing, over $279.9 million of that came from the Meadowlands alone, and in just 92 race days. With those figures provided to HRU, the Meadowlands accounted for 17.25 per cent of the total amount wagered on U.S. races, so it’s not a surprise that their figures mirror the industry. And in some cases, metrics from that track have helped to buoy overall numbers. For example, total industry numbers show a per race average gain of 4.91 per cent from 2021 to 2020, while the Meadowlands shows a 13.75 per cent gain in average handle per card.

Not to be overlooked, there were smaller tracks that also built from the momentum established in the latter part of 2020 to go on and post record numbers in 2021. Tracks such as Harrah’s Philadelphia and Hollywood Dayton are examples of ovals that not only smashed wagering volumes predictably from 2020, but those tracks went on to post total record handles in the 16-year and 7-year histories of the tracks, respectively.

Where Woodbine Mohawk and other tracks across the province differed from their U.S. counterparts is in the number of race days in 2021. Whereas tracks in the U.S. were able to race unimpeded in 2021, Woodbine Mohawk was impacted by two separate government mandated stoppages last year and as a result they raced even fewer days than they did in 2020. But, just the same, their results were comparable to growth in daily handle seen in the U.S. Average nightly handle at Woodbine Mohawk slightly exceeded its 2020 total, but its 2021 average card handle of $2.06 million easily bested the average handle of $1.69 million from 2019.

It’s easy to compare the numbers, but it’s much more difficult to pinpoint the reasons for positive industry trends that go back even years prior to the pandemic.

“In Canada, for starters, the last couple of years we became dependent on our ADW platform, HPIbet, which is a really clever, and technologically advanced system to use. People have turned to it during this pandemic as online wagering has become more prevalent, and the HPIbet platform has been great for us,” Lawson said.

“That’s the Canadian equation. Now as part of the U.S. equation where a lot of growth has been, we’ve gained a lot of momentum from having such a spectacular August and September. Through our marketing, racing and broadcast teams as well as quality of racing, there’s no question that we’ve been growing our market share and brand in the U.S. and around the world.”

Recent positive trends experienced by the industry comes at a time where there is presumed to be emerging competition for a finite set of wagering dollars. It’s impressive that as online gaming and sportsbooks expand across the country, harness racing handle, at least to date, continues to hold its own.

This year may tell us if these pandemic years were an aberration or if the industry has something sustainable to work with.