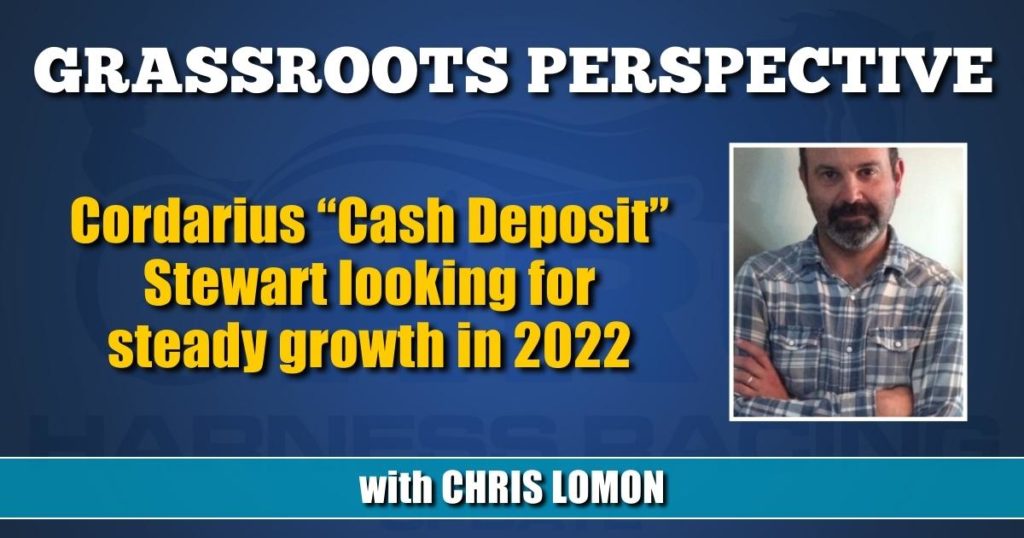 The man from Mississippi has come a long way, literally and figuratively, from his driving days in the Magnolia State.

Cordarius Stewart was just a teenager when he sat in the standardbred bike for his first race, a dash at one of the many county fairs that dot the Mississippi landscape.

His first two starts, at age 13, yielded a pair of second-place finishes, both narrow misses, mere inches keeping him from two trips to the winner’s circle.

The third time, however, would be the charm for the polite-spoken kid from Jackson, the Mississippi capital and most populous city in the southern state.

Although the career highlight came some 14 years ago, Stewart’s recollection of the victory is as crystal clear as the photo that was taken to capture the treasured moment.

“I got nosed out twice in my first two drives. So, I had two seconds. But I can easily remember the day I got my first win, which was a week later, with one of my own mares. Her name was Riley Richess. I have to say I was nervous because there were a lot of people watching. But once I got on the track and we went to the gate, all those nerves went away. We won on the front end. It was easy. They let me walk to the half in 1:05 and I sprinted home in a minute. I loved it. I can say it was a good feeling.”

The win also reminded him of what it took to make it a reality.

“I learned responsibility early on in my life. My dad, who was in the business, he let me train all the horses myself. When it was race time, he gave me a chance to drive when he would normally put other people down to drive. He knew I was young, but he knew I would work hard, that I would listen and that I would learn. When the day finally came for me to drive in a race, I was ready.”

Fast forward six years, and the horseman found himself in Illinois — Crete, to be precise — where he tested the waters of Balmoral Park.

Just 19 at the time, Stewart was eager to make inroads in his fledgling career, seeking to get that first pari-mutuel win under his belt, and with it, the chance to draw more attention from local trainers and owners.

He didn’t have to wait long to make an impression.

On the night of Nov. 24, 2013, Stewart partnered his very own Chili Beach, a pacing son of Sportsmaster—Talkofthebeach, in a $4,500 maiden race.

Sent on their way on a brutally cold night when the mercury dipped to a bone-chilling 5 Fahrenheit, the duo dead-heated for first in 1:56.3.

“It was really, really cold. I had a good trip, and it ended up getting us the win. That was a great feeling, too. I had thought about achieving that for a long time, so for it to come true, it was really satisfying.”

While the win didn’t pay immediate dividends, business-wise, Stewart remained patient and determined, dedicated to his craft and unwavering in his belief that better days were indeed ahead.

After a five-win campaign in 2018, Stewart finally had his breakout campaign three years ago.

It was a venture south to the sunny climes of California, to drive at Cal-Expo’s one-mile oval in Sacramento, that proved to be a winning move for Stewart.

“I think I’ve been patient and I never got down on myself at any point. Coming to California has been good for me. It’s another opportunity to drive for different people, to get better at what I do, and to use that confidence to get the results you want.”

When Cal-Expo’s current meet wraps up on May 1, Stewart will trek back to the Midwest, namely, Hawthorne, to resume his association with the Illinois racing scene.

He’ll also head to Running Aces, the five-eighths mile track in Columbus, MN, to test his luck there.

“I think each place gives you a unique view of racing. Everything is really different everywhere you go, but that’s a good thing to have. I also have a horse I own, Opulent (a bay daughter of Bettors Delight) that I’m hoping can have a good year too.”

As for what he perceives to be his best quality in the race bike, Stewart ruminates briefly before offering up a response.

“I think I’m really good coming off the pace and bringing them home. I can get them home pretty good. I like that feeling of flying home, working as hard as you can to get the horse to the wire first. Whether it’s a favorite or a longshot, when you are rolling down the lane it’s an amazing rush.”

Stewart teamed with Frewil Dakota Sven, a pacing son of Up Front Brad co-owned by trainer Richard Bertrand, to rhyme off back-to-back scores in April.

“We pulled off an upset on the best horse (Allmyxsliventexas) on the grounds and beat him two straight weeks. That was a really nice feeling and I was lucky to get to drive such a nice horse. Hopefully, I get a chance to drive some more good ones too.”

There’s no doubt Stewart, who will turn 28 in April, looks the part on the racetrack.

When he returned to racing in 2017, he needed some new racing colors.

“This guy was selling colors and I bought ones that were worn by Jordan Stratton. I started using those and they gave me good luck my first year. I ended up using them at Hawthorne and everyone started calling me Jordan. I changed my colors and put dollar signs on them instead of ‘S.’ I got the idea from [driver] Brandon Bates. My nickname is CD. Brandon said one day, ‘You should put some dollar signs on your suit. Your initials are CD, so we’ll call you Cash Deposit.’ I liked it. And now people call me that. Everybody has the stars and horseshoes, but Brandon suggested I put dollar signs on mine, so I did. It’s different and I like it.”

Stewart will look to cash in on his unique look in 2022 and well beyond, wherever he happens to be holding the reins.

“I want to get my average and numbers up this year. That’s my goal. Looking back, I fell in love with the sport right away from those early days in Mississippi and I still do now. There’s still a lot what I want to achieve, and I know I’m ready for whatever challenge comes next.”