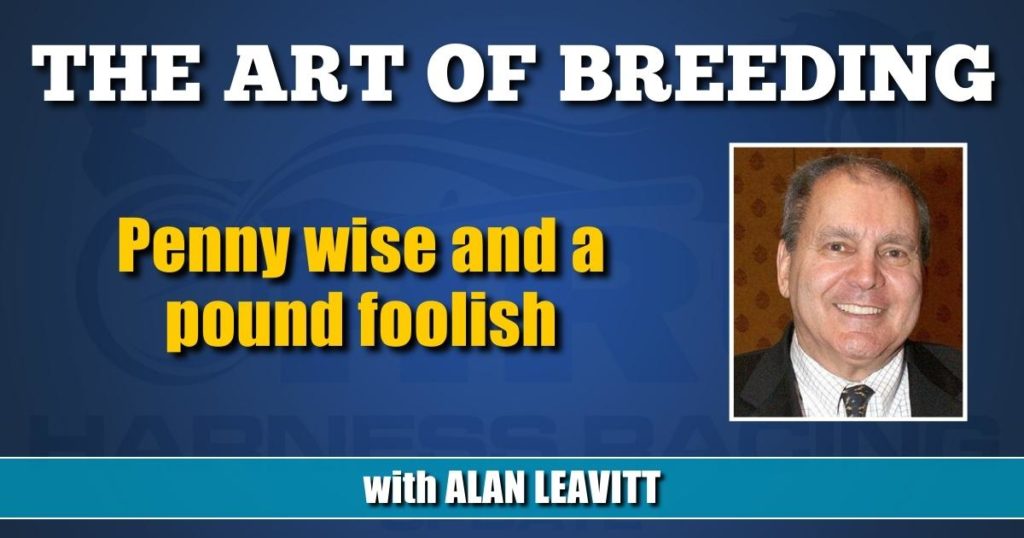 Penny wise and a pound foolish

First, a few end-of-year observations. The pedigrees in our yearling sale catalogs could be so much better if they included a paragraph devoted to the yearling’s sire. He is far more important than the few extra lines gained re the third or fourth dam that it shouldn’t even be an open question.

Going a little further on this subject, I’ve learned long ago that, when selling a yearling, the sire is essential in catching the buyer’s interest, and then the dam sets the buyer’s price range.

If you’re lucky enough to be selling a yearling by Walner or Downbytheseaside, you want the pedigree page to extol all the virtues and accomplishments of these horses as sires. To scrimp on them is, indeed, penny wise and pound foolish.

Another point I see in the owner’s statement for many older horses, either broodmares or racehorses, is that the horse is being sold as “part of an annual reduction.” To me, this says, in bold face caps, what you’ve got here is a cull. Annual reduction or not, you never sell your best horses unless you’re going out of business. I believe someone long ago liked the sound of that phrase, even if it did the opposite of enhancing the horse being sold, and it’s hung around ever since.

Personally, if I have to give a reason for selling a horse, I like to go back to the sign in front of a restaurant in Hanover, PA when I was growing up there. It said: “If you don’t stop here and eat, we’ll both starve to death.”

Looking back, in my early days in this business, Stanley Dancer and Billy Haughton played major roles in my life. Haughton, because he was the biggest yearling buyer in the sport, and also a fellow USTA director from District 8A. How District 8A came to be, was thanks to two long-time directors from upstate New York: Dr. Harry Zweig and Dr. Albert Miller.

Although I didn’t beat either of them, I gave them a scare when I had the temerity to run against them for a USTA directorship. Peter Rhulen, a great guy and one of my best friends, represented me in the vote counting. He soon had his sleeves rolled up and sweat on his face as the counting went on for hours and hours.

Like I said, both Zweig and Miller beat me, but to make sure I didn’t come after them again, they went to Columbus and divided New York into two new districts.

District 8A included all of New York City and Westchester County. Everything north of Westchester remained in District 8. Since I lived in the city and Haughton lived on Long Island, we wound up spending a lot of time together on USTA business.

And being with Haughton was an education unto itself. Let me just say that Haughton lived life to the fullest in every aspect of a man’s life. As I’ve said before, he was one of those rare people who almost glittered. The only comparison I can make is to the wedding reception in Palm Beach in 1958 when I screwed up my courage and introduced myself to John F. Kennedy. There actually was an aura around him.

But Dancer was a totally different deal. He had none of Billy’s glitter, but he was much better at taking care of his material concerns. He was the trainer of Noble Victory when he became the first million-dollar standardbred when I syndicated him for K.D. Owen.

At that point, Dancer made a radical change by the training standard of that day, and he stopped training Noble between races. The result was seven straight free-for-all wins, and in each one he set a new track record. Then Dancer took him to the DuQuoin, where Noble set a new world record for trotters when he won in 1:55.3.

Shortly thereafter, Ken Owen and I retired Noble to the stud at my farm, Lana Lobell Farms.

When I syndicated Noble Victory, and you must remember in those days a full book was 60 mares, I included two free breedings for Dancer.

That fall, Mr. and Mrs. Rex Larkin dispersed their breeding farm, Poplar Hill, at the fall sale in Lexington. It wasn’t a particularly happy event because right after they consigned all their breeding stock to the sale, both of the Larkins perished when their commercial flight crashed on take-off from the Cincinnati airport.

Every mare the Larkins owned was a pacer, with one small exception. That was a pacing bred mare who trotted named Flashy Princess. She was by Cardinal Prince, a pacer, who was a successful racehorse and sire in his day. He was also a beautiful chestnut horse, and Flashy Princess got her color and good looks from him. But unlike her sire, she trotted to a 3-year-old record of 2:04 and earned a very respectable $17,380.

While that would be peanuts today, it took a good horse to win $17,000 in the early ‘50’s. Although she went through the Tattersalls sale as a barren mare, Flashy Princess had already produced several respectable trotters.

Dancer, who played every aspect of our game deftly, grabbed Flashy Princess for $900. He used one of his two free rights to breed her to Noble Victory, and the result was a filly named Egyptian Jody 2, 2:04.1 ($54,156).

That filly’s name alone was somewhat fraught. At the time, Dancer was married to his first wife, Rachel, but a few years later the filly’s namesake became the second Mrs. Stanley Dancer.

But her name apart, Egyptian Jody became a foundation mare for a chain of top trotters. They include the Hambletonian winner Harmonious, and my favorite underrated stallion, Uncle Peter, who himself won over a million dollars.

Finally, with all my talk about how to advertise your horse, it would be wise to remember what Dr. Samuel Johnson wrote in 1759: Promise, large promise, is the soul of an advertisement.

And he certainly said nothing about an annual reduction sale.