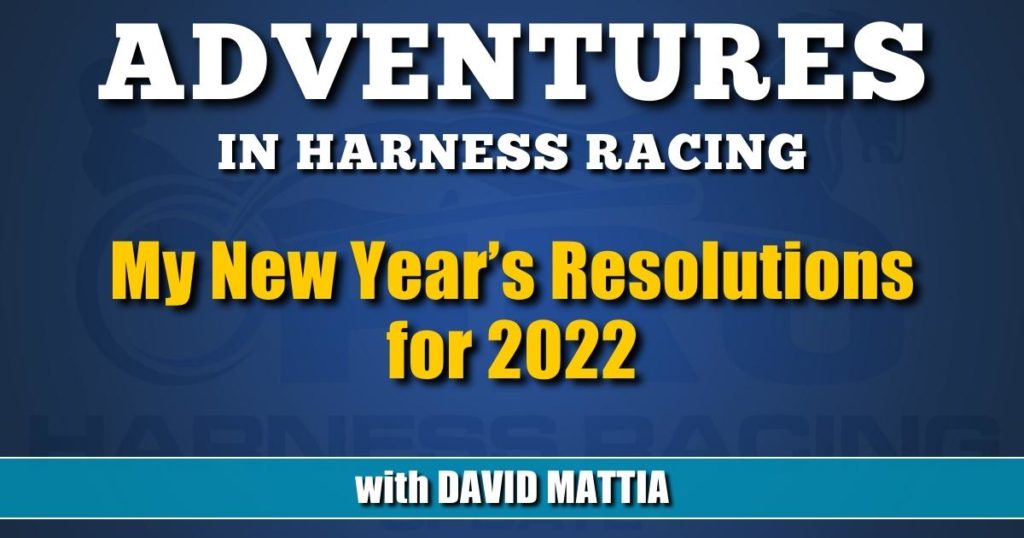 My New Year’s Resolutions for 2022

As we approach 2022, or what I now call, “the variant strain of 2020,” I have decided to write up a list of New Year’s Resolutions; knowing full well that I won’t keep any of them.

As a small child, I quickly figured out that the whole resolution thing was a “grown up’s lie” anyway. You know, like dead pets who “went to live on a farm” or relatives who “went to heaven.”

The only New Year’s Resolution I could easily keep is one where I vow to never again eat bleu cheese. I double up and give it up for Lent too. I can’t believe anyone eats it.

Anyway, about those resolutions:

It’s always best to start at the beginning. I want to get this one out of the way quickly because it’s a resolution horse folks subconsciously make every day of their lives.

Sadly, this resolution is not doable. It’s a lifelong curse that haunts all horse folks and it creeps into your sleep in several merciless shapes, styles and sizes.

Have you dreamt that your horse got loose on the New Jersey Turnpike or hopped off the George Washington Bridge on the way to Yonkers? I have. In fact, I have had that dream at least 100 times.

I have a close friend in racing who tells me that he has fretful dreams about his horses every night of his life. Can you imagine? I’m sure most of you can. I’m up to about three nightmares per month myself.

Promising to not have nightmares about your horses being in peril is not possible. It will never work. Forget it. Take a deep breath, grab a pitchfork, and get on with the life you relinquished when you dropped out of real life and opted instead to mingle with horses.

Did you notice how I just referenced Macaulay Culkin in the previous resolution? I must stop doing that. Yes, I know him, and we like each other, but I haven’t heard from him since we briefly collaborated on something last year. Still, I never miss an opportunity to refer to “Mack” as my friend.

There is, however, another iconic former child star who is, quite by accident, a very dear friend of mine. I used to brag about that friendship too, but now that we’ve become actual friends, I don’t mention her.

When it comes to the racing game, number three on my list really bugs ME about ME. It makes me feel common. I’m almost ashamed to write it, but it’s demented fun at the same time. Hard to believe, I know, but yes, there are some people in racing I simply do not like.

Do you ever do that? Root against people you dislike? I sometimes do, and while it’s rare, it’s creepy. It makes me think I have demons. I mean, everyone has demons, but mine must be really bored.

Given the nature of my work, I try to watch as many races as possible, but apart from making a special effort to watch the big-name events, or races that involve my close personal friends, I often give a special side-eye viewing at the one or two people I dislike on any given racing card. Mind you, I have nothing against the horses. I just hope they get stuck behind dead cover or that they belonged to someone else.

Kindly note that I don’t do this with the played-out idea that some trainers win too much, or they have too many horses. Usually, I like the big shots who often win. My issue is a strictly personal one and I do it simply because I personally dislike a few certain people. After a lifetime in racing, it’s amazing that my enemies list is as small as it is.

To the punters out there, the upside is that the horses I root against, regardless of odds, almost always win. Frankly, I deserve to have innocent horses spite me like that. It’s called karma, and it’s pronounced, ha-ha-ha-ha.

I asked a few industry friends about this bad habit of mine, and they agreed that they too will sometimes watch a race just to see someone lose. I suppose it’s normal within the walls of competitive sports, but I wish I didn’t do it. Life itself is already a competitive sport, so why mess around with ill will?

Okay, now that I got that horrible admission off my chest, there’s a few more.

My greatest skill as a writer is my lack of brevity. In my opinion, I am the world’s greatest writer of long stories. The stories themselves are not great by any means, but their length is spectacular. Sometimes, after the story has been published, I will go to the website and read it. Hours later, when I’m done reading, I realize that I could have told the same story in a tweet. Like I wrote in a recent piece, I often go a mile too long because I’m afraid of going an inch too short. I worry that I might leave something out. Basically, my intentions are good. Oh lord, please don’t let me be misunderstood.

A few months ago, I sent a completely fake text to my best friend in harness racing. I wrote: “Just for the record, in case anyone asks, I am currently with you in Florida because you said you needed a hand shipping a horse up from Pompano. We will not be back until next week. Be vague about it, okay?” He texted back, “Roger that.”

Mind you, I haven’t been to Pompano since I was 16.

Do you see what I did there? He’s a great friend, right?

And then there’s Tony Alagna. I mean, I barely know him, but the poor guy has no idea how much I do for him. Tony keeps me away from so many family obligations and he doesn’t even know about it.

“Sorry, mom, I can’t go to your godson’s wedding. I have to help Tony Alagna at the Meadowlands that night.”

“Sorry, mom, I can’t go to the funeral on Friday. I’m qualifying a few horses for Tony Alagna.”

The list of lies is endless, and apart from writing about him a few times, I’ve never done anything for or with Tony, but he always comes through and makes my life so much easier. And to be honest, my family pretty much deserves my deception because they loathe harness racing, and they detest the fact that I have made a career out of it. Because harness racing is angrily dismissed in my family, I can easily invent professional racing obligations that involve famous people they don’t know.

But why did I choose Tony Alagna as my alibi?

I chose Tony because people in my family, despite their disinterest in harness racing, have heard of him. They don’t know him, and they wouldn’t dare call him, but they know he exists. He’s famous.

Before Tony, I used to use Ron Gurfein because he too was a name my mom knew.

Dear Ronnie, I apologize from the bottom of my heart because I truly miss you and all the things, real and imaginary, that we did together, but someone big had to take your place in my world of deceit. I guess I could have used Ron Burke, but Tony was the first name that came to mind while I was lying about something.

Thanks for 2021, Tony, and I look forward to helping you with more fake stuff throughout the New Year.

My harness racing peeps, namely one well-known trainer, hate when I mention the same ho-hum horses repeatedly and leave out any mention of the topnotch horses I’ve had.

Truthfully, and in the interest of the oddities in my life, I have a legitimate excuse for doing this, but I must admit that it sounds stupid to keep talking or writing about the untalented horses I’ve trained rather than the good ones.

For example, I can easily write about Port Ravenite when I should be mentioning an awesome mare named Our Harbortown who was owned by the same person.

I only had Our Harbortown for a short while, still I’ve come to realize that she was one of the best horses I ever trained, but poor little Port Ravenite, is a much more fascinating story to tell other horsemen.

A son of the great stallion (NOT) Sundance Skipper, he was a loveably scrawny knee-knocker who seemingly had zero speed yet managed to win one race by open lengths when the tire of the race bike next to him exploded like a stick of dynamite and scared the s – – t out of him. Do you see how that’s a great story? It almost sounds fake.

The only interesting story about Our Harbortown, apart from her beauty and anti-gravity speed, happened one night at the Meadowlands after she’d won her race. As I struggled to uncheck her in the winner’s circle, I asked her driver, Mike Lachance, “How was she?” He looked at me like I was an idiot, and replied, “Well… she won.”

From Port Ravenite, however, I learned that most horses are probably much faster than they let us know. Yes, there are a lot of interesting stories attached to Port Ravenite, and I like to write about them. They’re conversationally funny and perhaps even inspiring. Now that I think of it, I don’t think I’ll stop talking about him. I might have to shelve this resolution.

Did you know that Port Ravenite, thanks to the Standardbred Retirement Foundation, went on to live a long and happy life? Yeah, he did.

So, do you see why I talk about the sub-mediocrities I’ve trained?

Well, I guess I’ll never have a Captaintreacherous or a Somebeachsomewhere, so I opt to tell stories about the unknown horses who enriched my brain and enlivened my heart.

Sure, I could easily talk about Watchit Skipper all day long, but what’s so interesting about him? He had no personality whatsoever. He was just a guy who went to work every week and kicked ass like a million other horses. I respected him and liked him and appreciated him, but where’s the story? He’s just stats on paper.

It’s not out of the question that one day I will have a superstar, but I’m a writer. Even if my yet-to-be fantasy horse wins in 1:44, he or she better have an interesting personality. Stats aren’t all that fascinating when you’re sitting around a campfire telling a story.

Okay, so these are my New Year’s Resolutions that I have no intention of keeping.

The way the world is now, the only sensible resolution anyone can make is to just keep on living.

I know what you folks out there are thinking. “Dave just violated his New Year’s Resolution about not telling long stories.”

I hope that all my harness racing peeps out there had a Happy Holiday season, and their New Year will be the best one ever.

Oh, and get your shingles vaccine. You DO NOT want to hear my story about that.