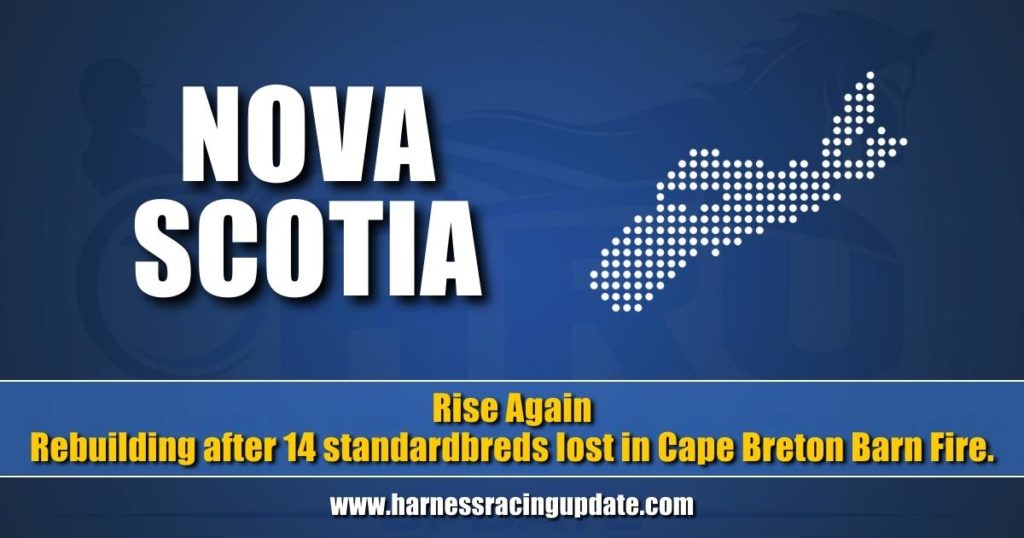 “Rebuild,” because “replace” would be inaccurate. ”Horses are like kids,” said Joel LeBlanc, Cape Breton Horsemen’s Association (CBHA) board chair. “They’re like family to us all.”

Last Monday morning (Dec. 20), he answered a phone call for which he was unprepared.

“Joe Nearing called me about a quarter after 7 on Monday morning. You were dumbfounded. You didn’t know what to think. It’s absolutely tragic. All of our biggest fear is getting that phone call.

“Joe and Kevin were renting the facility, the barn, the track, and that” at Donmar Farms in Frenchvale, NS, LeBlanc told HRU. “It was a breeding establishment through the years, Donald Rankin and his wife [Margaret] owned it. Both passed away and Mary Lou [Rankin-Denton], the lady who owns Donmar Farms now, she’s [Douglas] ‘Sonny’ Rankin’s sister… My heart breaks for the horses, the people, everybody.”

LeBlanc learned of the equine lives lost in the blaze:

Willie Seymour, president of the Cape Breton Horsemen’s Association, said the tragedy has moved horsepeople, but also community members outside the racing industry.

“Kevin has probably one of the bigger stables in Nova Scotia, for sure. He has another six [horses], I think, at a different spot, so he probably had 15-16 horses total. But these were all of his racehorses. He has breeding stock at a different location. I think of the 11 that he lost, seven of them were racing last year.” The barn itself, equipment and hay was also destroyed in the blaze, for which no cause has yet been identified.

Seymour’s immediate concern was for the bereaved horse owners, he noted that the fire would leave a lasting mark at Northside Downs and Inverness Raceway, Cape Breton’s two pari-mutuel racetracks. “Between [Bailey] and Mr. Nearing, between us and Inverness… this is a hit to our horse population, for sure. I mean, take out [Bailey’s] five entries per week, and then Mr. Nearing had two that were racing quite a bit, not counting any of the younger ones that were probably going to race going forward.”

He described the two horsemen as “pretty emotionally banged-up” in the days after the disaster: “Right now, our focus is not so much worrying about the racetrack side – it’s trying to help these people get through and hopefully get them back on their feet and racing in the future.”

The loss is both financial and bigger than financial. “You know yourself, down in our area, people are not racing for their living – this is their pastime, basically, right? And they felt such a strong personal connection with these horses,” said the CBHA president. “Not saying it doesn’t exist in the big business area in Ontario, but I think it’s more so here, where these horses basically become family pets in most situations.”

He expressed hopes that Bailey and Nearing would recover and remain active in the close-knit racing community. Both were respected horsemen, one established and one a relative newcomer: “Kevin’s had a large stable for a long time, dating back to Tartan Downs. He’s probably been there since the 1970s, I would think. Joe is a more recent participant. He’s been involved for at least the last five years at Northside, racing two or three, and got into a little bit of breeding. In our industry, where we’re struggling to get new owners, I mean, it was good to see some fresh faces come in.”

Ken Middleton’s voice is perhaps the most recognizable in Canadian harness racing. The Woodbine Mohawk Park announcer told HRU he wanted to put his widely-heard platform to good use after he heard of the Cape Breton blaze.

“I read about the fire through one of the social media platforms, and being an animal lover myself it was heartbreaking to hear about the tragedy,” he said. “We’ve gone through some heartbreak in Ontario with similar tragedies, and it was a terrific outpouring of support from all over when it came to trying to help people get back on their feet. My heart goes out to the people who lost horses in the fire. It’s a tragedy that is every horseperson’s worst nightmare.”

A standardbred owner/breeder/trainer himself, Middleton said he was contacted by “a fellow named Hammie Ford’’ who “asked if we could rustle up some gear for the people affected by the fire.” Ford also mentioned that Ontario-Maritime horse transport specialist Jordan MacKay was willing to deliver donations to Bailey and Nearing. “I told him I’d get in touch with people at all of the tracks to see if we couldn’t assemble a collection of items. It was nice that he reached out, and hopefully people can contribute whatever they can,” said Middleton.

Equipment and financial donations (cheques) are still being accepted. “I reached out to [paddock judge] Marnie Bochenek at Flamboro Downs, [racing manager] Tony Elliott at Western Fair, and [outrider] Joanne Colville at Mohawk Park to see if they’d direct people making donations to the appropriate drop off locations at each of the tracks,” said the race caller. “We advertised that collections would be accepted up until New Year’s Day. Jordan, from what I understand, is heading back to the Maritimes on January 3rd, I believe.”

While the holiday racing schedule was light the week of the fire, meaning fewer potential contributors at the Ontario tracks, Middleton encouraged donations before next Monday (Jan. 3), MacKay’s departure date. “What motivates people from all over to be a part of any fundraising initiative for something like this is for the love of the horse,” he said. “We all love horses, and we know how devastating this must be for the people affected in this tragedy. While the horses and their individual personalities and characteristics that define them can’t be replaced, we as horsepeople can lend a hand by donating gear or money to buy equipment to the people affected directly by this tragedy.”

Willie Seymour shared that sentiment. “I have a few horses myself and I just couldn’t imagine waking up to that nightmare. [Bailey and Nearing] are very resilient people and I know it’s going to be difficult to get through this, but, optimistically, we can do the best we can to support them and have them back within our industry when they’re ready.”

It’s not just about sustaining the horse population in advance of the 2022 racing season, which begins May 7; the CBHA president said horse numbers were fairly consistent at Northside Downs. The show of support for Nearing and Bailey has a higher purpose: “We certainly hope the end result is that we’ll keep them in our game. They’re two very positive people in our community, so we certainly would like to do whatever we can to get them through the short term, dealing with the tragedy, and long term, going forward, bring them back in as horse owners racing at Northside, or any track for that matter.”

While several online fundraising campaigns have been set up, Seymour stated that anyone wishing to mail a donation by cheque can send it to the Cape Breton Horsemen’s Association, specifying it’s a contribution for the Joe Nearing and Kevin Bailey fund.

“They could certainly send anything to our race office,” he said. “It’s located at our off-track betting site. We would certainly make sure that [cheques] got redirected, as long as they had a little note inside what they sent it for. We’ve had a few people already who actually weren’t comfortable going through the GoFundMe [campaigns online].”

In regional television coverage of the barn fire, a bay horse, possibly a stallion, can be seen turned out in a nearby paddock, head high beyond the smouldering ruins. “That was a turnout horse who had his own barn, like a single-stall kind of thing,” said Seymour. “A former racehorse, Donmar Paul [p, 6, 1:58.1h; $62,439 US], I think. He was a really good horse here, years ago.”

And now, seemingly a beacon in the midst of a sad turning point for his owner, her family farm, and the two other owner/trainers whose horses were stabled there.