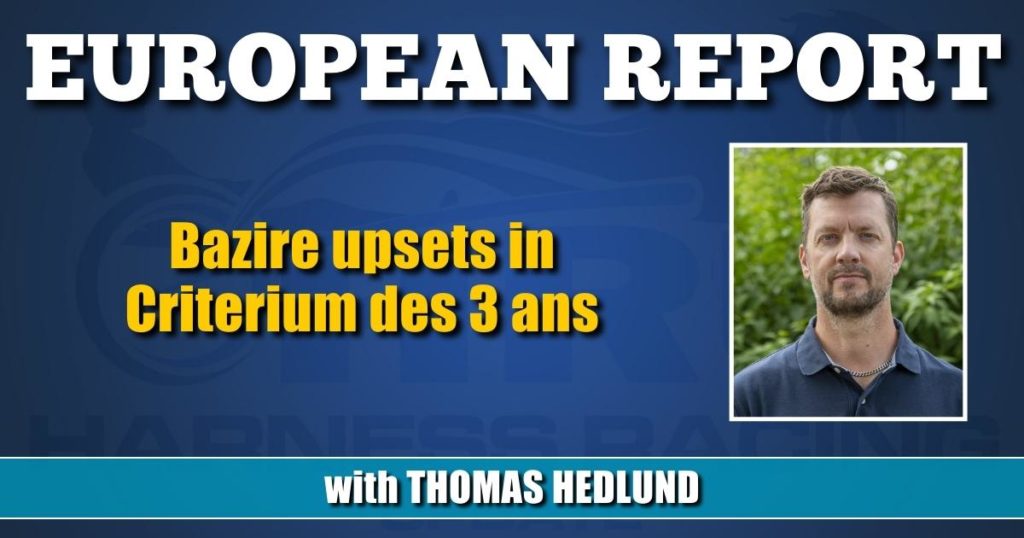 The $230,000 Criterium des 3 ans for the best French bred 3-year-olds was held at Vincennes on Sunday (Dec. 19) afternoon and the speculations ahead of the race were about whether Philippe Allaire’s Izoard Vedaquais would remain undefeated in his 13th attempt at the track.

Allaire had two of the most favored horses in the field of 15 trotters and both Italiano Vero, driven by David Thomain, and Izoard Vedaquais (Eric Raffin) got early orders of attack towards the front in the 2,700 meters long race.

It took almost 5/8ths of a mile before Izoard Vedaquais hit the lead, via a tough push three wide during the races first half mile.

Midway into the race, Jean Philippe Dubois pushed his Inoubliable to the front, but Dubois gave up that position shortly after since Raffin was eager to put his favorite in the lead once again. But the move by Dubois cost power for the front horses and the pace was high as the field reached the first mile. Despite the tough trip for Izoard Vedaquais, the son of Bird Parker still had control of the race as they turned for home.

Fabrice Souloy’s Ideal Ligneries was served a perfect trip in third over by Franck Nivard and at the top of the stretch, it seemed like the Criterium would end up in Souloy’s possession, but behind Ideal Ligneries, Jean-Michel Bazire placed Idylle Speed (Carat Williams), who showed great strength over the home stretch. Shortly ahead of the wire, Idylle Speed put her nose first. The mile rate over 1.6 miles was 1:56.1.

The leader and favorite Izoard Vedaquias held bravely to second place ahead of Ideal Ligneries.

Francois Pierre Bossuet trains the winner and his barn contains more champions than Idylle Speed. Last week, his 4-year-old Havanaise (Ricimer) — who was runner up behind Hanna des Molles in Criterium des 3 ans 2020 — claimed the title in $115,000 Prix Ariste Hemard and the future looks bright for Bossuet.

Bazire claimed his fourth win in the Criterium des 3 ans as a driver and he still waits for a trainer’s victory in the race.

There is no doubt about the great status that Criterium des 3 ans has in France and when we look back at previous winners in the race, names such as Ready Cash, Timoko, Bold Eagle, Charly du Noyer and Face Time Bourbon are found. International champions are not seldom born in Paris in December every year.

The $230,000 Criterium Continental for 4-year-olds and the $115,000 Prix Tenor de Baune for 5-year-olds are headlining at Vincennes on Sunday (Dec. 26). Two spots in the Grand Prix d’Amérique 2022 are at stake and it seems to be a big interest entering the two races.

The definite entries list for Sunday’s race card at Vincennes is not yet set, but several top trotters show interest in the hunt for a spot in the Prix d’Amerique. Criterium Continental over 2,100 meters can be something special with elements of Italian top trotters as Bepi Bi and Bleff Dipa.

American bred Fifty Cent Piece will most probably like the 1.3 miles more than 1.6 miles, which she tried at Vincennes in her debut in France two weeks ago.

The 5-year-olds in the Prix Tenor de Baune are well merited and the most interesting entry is probably Fabrice Souloy trained Ampia Mede Sm, who looks back at eight consecutive wins in France and the Ganymede mare has really impressed a lot in her performances.