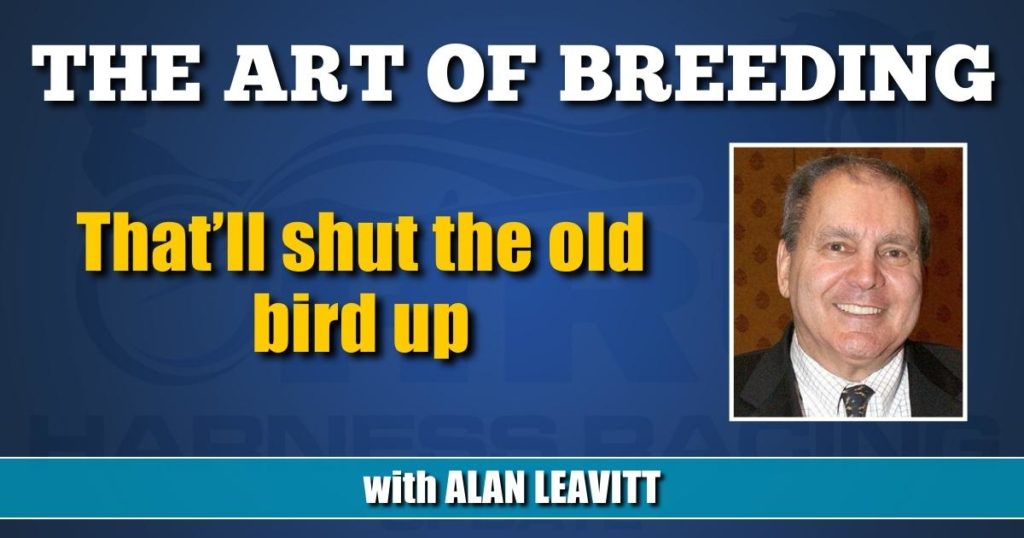 That’ll shut the old bird up

First, I noted at too great a distance to catch all the details, an exchange of messages between Bob Boní and Albert Adams regarding the sire careers of Niatross and Nihilator.

Since Niatross won over $2 million and Nihilator won more than $3 million, I could find no serious fault with the conformation of either horse, including the way each of them stood. As for their progeny, if each horse passed on his exact conformation, there would be no reason they couldn’t race just as successfully as their sires.

The fact is, however, that neither horse is today regarded as a successful sire. Here there is one caveat with Niatross. He stood his first season at Castleton Farm, in Lexington, KY. The conditions there were nearly ideal, including both the physical plant and the quality of horsemanship the farm practiced.

A genetics expert once told me that a change from better to worse conditions could actually “juggle” a stud’s genetic make-up. That could be an explanation for the abrupt drop-off in Niatross’ production of top stakes colts and fillies.

However, even though both Boni and Adams are smart people, and sharp horsemen, I believe here they’re ignoring the total disconnect between every horse’s phenotype and genotype. As a gentle reminder, phenotype is the visible horse, and genotype is the genetic makeup of the animal.

In both cases, Niatross and Nihilator were great physical specimens, as demonstrated by the big money they both won. But one has to think that, genetically, each of them were dealt a low genetic deck.

If one pictures a horse’s genetic range as a deck of playing cards, it starts with two and runs to a high of ace. Each of those numbers represents a speed gene, from lowest to highest. A great sire has a deck that probably starts with a 10, so he brings a high card to every mating. Remember, too, that the genetic makeup of every horse is formed at the moment of conception, with each parent contributing equally.

As I keep saying, the genotype, or genetic makeup of every horse, bears no resemblance to his or her physical self, the phenotype. So despite their racing excellence, both Niatross and Nihilator appear, retrospectively, to be cursed with a genetic range that was concentrated in the lower cards in their genetic deck.

By quick contrast, a successful sire, say Muscle Hill, probably has only high cards in his genetic deck. So when he’s mated with a mare that has a deck that ranges from high to low, Muscle Hill will make sure that their offspring will be at least a decent racehorse, and if she helps him out at all with a nine or a 10, you have a stakes horse.

All of this has gone longer than I originally intended, because the people and their horses I want to talk about are Mr. and Mrs. Larkin, aka Rex and Ma, and Stanley Dancer.

The Larkins were major operators in their day, with a Kentucky breeding farm, Poplar Hill, and a good string of racehorses trained by the great Canadian horseman, Clint Hodgins. I got to know both of them fairly well when I was first getting in.

The Larkins original breeding stallion was a Volomite horse named Poplar Byrd. As Rex explained to me, his name reflected both their farm name and a quiet riposte to the Bluegrass Bluebloods, who regarded anyone from Chicago as Al Capone’s first cousin.

As Mr. Larkin explained to me, the Byrd part came from an employee whose last name was Byrd. I was probably the only outside person who actually knew the genesis of the word, but that was enough for him.

The Larkins’ great breeding achievement was the magnificent pacing machine Bye Bye Byrd. He was one of the great racehorses of his day, and later a great sire. Unfortunately, the Larkins didn’t live to see his success as a progenitor, but more about that later.

Ma Larkin explained to me one day at the Red Mile how Bye Bye Byrd came to be. She had been fascinated by Billy Direct, the first pacing sire to stand at Hanover Shoe Farms, and she coveted mares by him.

Hanover had kept back as a yearling a great bred Billy Direct filly called Evalina Hanover. She was still racing at the Red Mile for Johnny Simpson, the farm trainer, as a 3-year-old. Ma wanted her badly, and after one of the filly’s races she sent an emissary to ask Lawrence Sheppard for a price.

Mr. Sheppard knew who the guy was really asking for, and he shot back;

Instead, the old bird sent back a message that it was a deal, and the filly was hers. Which proved Ma to be prescient, as the mare produced an immortal in the form of Bye Bye Byrd.

So a few years passed, and then Stanley Dancer and a pacing bred mare who produced trotters entered the picture. But that’s a story for next week.