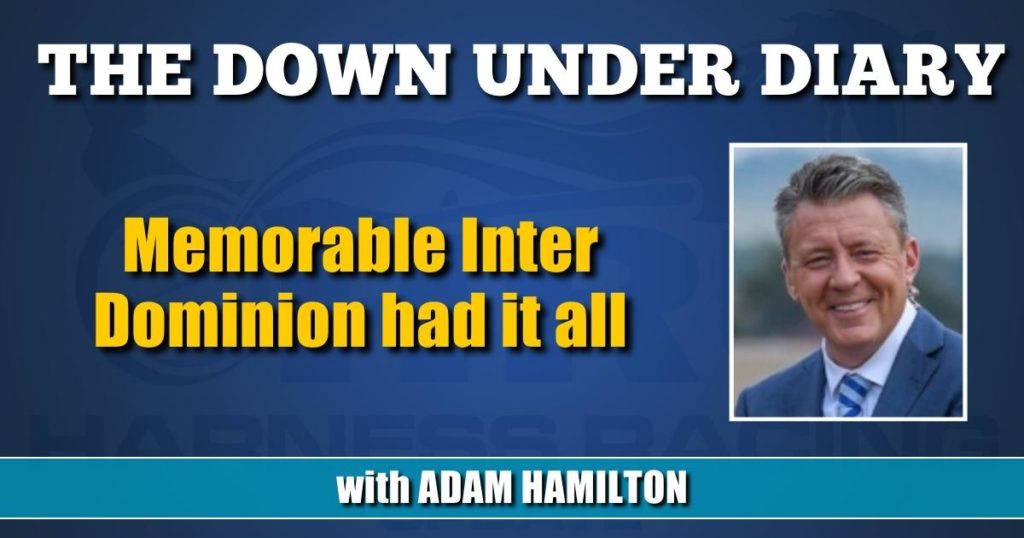 Memorable Inter Dominion had it all

The history of Down Under’s biggest event, the Inter Dominion, dates back to 1936, but it may never have had chapter with so many incredible stories and so much drama.

What unfolded on finals night at Menangle last Saturday (Dec. 11) – and in the two weeks of qualifying heats leading-up to it – was the stuff movies are made of.

Where do we start?

How about with the most dramatic moment, the fact a stewards’ protest hearing decided who the Inter Dominion pacing champion was? There have been three protests involving the winner in Inter Dominion history, but none have changed the result until now.

Courtesy Club Menangle Boncel Benjamin (outside horse, Josh Gallagher) was declared the winner of the 2021 pacing Inter Dominion final at Club Menangle after Expensive Ego was disqualified by stewards.

Yes, rising star Expensive Ego was first past the post, beating the rank outsider and the moderately-performed Boncel Benjamin by a head.

As Gallagher said: “100 per cent there was a run up the inside of the winner for me halfway down the home straight and I’d have gone through and won easily if (David Moran driving Expensive Ego) didn’t cut me off.”

Grimson agreed: “I was going to protest without seeing the vision, but when I saw the head-on, I thought it was clear cut as it can get.”

Despite the arguments of Moran and Expensive Ego’s trainer Belinda McCarthy, stewards agreed with Gallagher and Grimson.

After a lengthy 30-minute hearing, history was created, and the result was reversed.

Boncel Benjamin, a 7-year-old who was for sale for just $35,000 in a claiming race just a few months earlier, was the new Inter Dominion champion.

Remarkably, he had only been in Grimson’s stable less than three months after leaving Victoria as just an honest battling pacer.

“He came to because he was a fast beginner and they thought he might be suited to the mile racing we have here at Menangle,” Grimson said. “He just kept improving so we thought we’d nominate for the Inter Dominion and have a crack at it.”

The Inter Dominion final was anything but a sprint, being run over the marathon 3,009m distance, but Boncel Benjamin ran his last half (800m) in an unheard of 52.8sec to get within a head of Expensive Ego and then get the win on protest.

It delivered an emotional fairy tale of the highest order for his owner Steven Duffy, who named the horse after his father, Boncel Benjamin Duffy, who died in a car accident when Steven was just 21 years old.

“I always promised I’d name a horse after Dad when I got one good enough and this was the horse,” Duffy said. “He’s had three tendon injuries and looked he’d never fulfill his potential… and now he does this.”

Duffy revealed he interrupted his eight-hour drive from his Shepparton home to Menangle for the final to stop at his father’s grave.

“I told him we were going to Menangle to win the Inter Dominion with his horse,” he said.

On the way home, Duffy stopped back in at the grave to sit the winning trophy and some flowers on the grave and “celebrate” with his Dad.

That’s the stories around the pacing final.

In the trotting final, living legend Brian Gath created history by becoming the oldest driver to compete in any Inter Dominion final.

At the age of 77, Gath, who has driven over 3,600 career winners, drove in his 13th final an incredible 48 years after his first. And 43 years after he won it with the pacer he trained, Markovina, in Melbourne in 1978.

Gath didn’t win the race last Saturday, but he won a new legion of fans with his grace and story as he partnered Illawong Stardust into fifth spot.

There was also the 66-year-old truck driver and hobby trainer Ray Harvey, who had the only racehorse he trains, The Penny Drops, start second favorite in the final. Harvey was a former apprentice jockey, jumps racing rider and thoroughbred trainer before taking up training harness as a hobby.

Like Gath, Harvey didn’t win, but in some ways, he did by even having a finalist in such a special race.

The winner was the injury-plagued rising 9-year-old Maori Law. He was such a story of persistence for well-known Victorian owner Fred Crews, who never lost faith despite a string of setbacks and stable changes.

In the end it was another legend of the sport, former NZ horseman Richard Brosnan, who teamed with his son Emmett to deliver Crews’ dream and reward his patience.

It was Brosnan’s second Inter Dominion final win, but his first since trotter No Response stormed home from a seemingly hopeless spot to win the 1979 final in Christchurch, New Zealand.

The was supposed to be a weak Inter Dominion, one ravaged by the restrictions of travel caused by COVID-19 around Australia and NZ. Instead, it was as memorable a chapter as the great event has seen.

And there watching it all was former NSW and now U.S.-based young gun driver Toddy McCarthy.

He summed it up perfectly when I bumped into him straight after the race night: “Well, that night certainly had it all. What a night.”

Yes Toddy, it certainly was.