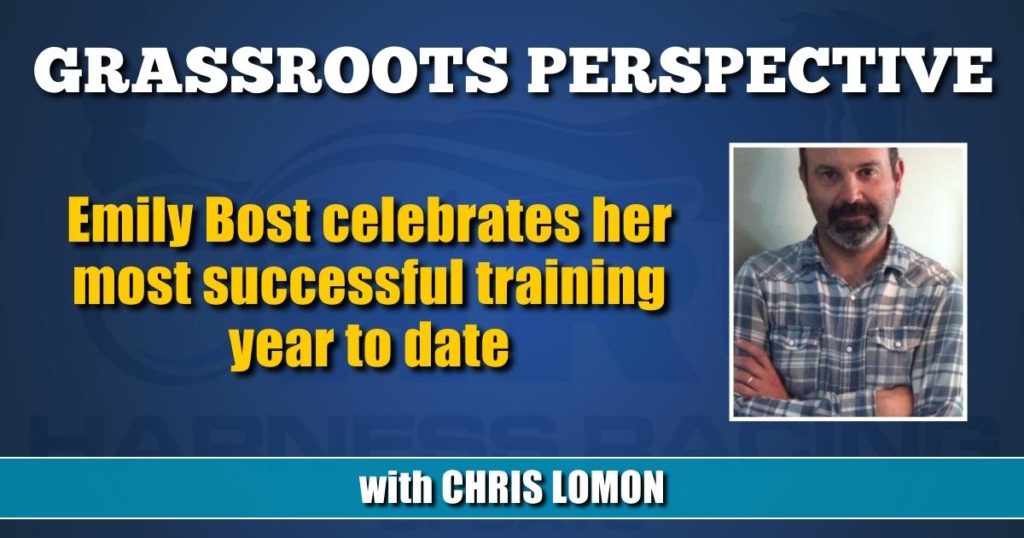 Emily Bost celebrates her most successful training year to date

The first-generation horsewoman said treating each horse’s mental welfare is a key to her improving numbers.

In a sport that’s dominated by numbers, Emily Bost looks beyond dollar signs and top-three finishes to define her standardbred racing career.

It has been a memorable year for the longtime horsewoman who joined the training ranks in 2019.

Her 2021 stat line is certainly impressive, one that has delivered her most successful season to date.

And while she is both grateful and humbled by her strong campaign, the barometer for success comes in the form of keeping her horses in fine fettle before and after they race.

“We were fortunate to make some good claims. We had a couple claimed off us and we sold one in the sale, so we’re just down to two horses right now. We’ll be looking to get a few before the end of the year. For me, honestly, I just take things day by day, and treat every horse as an individual. I try not to have too many expectations. I don’t keep track of the stats that much. I just put my heart into taking care of the animals and finding what they need to succeed.”

That formula isn’t limited to only the physical aspect of the horse.

“It’s also about treating each horse’s mental welfare and making sure they are put in the right conditions where they can do well because I believe that helps them mentally too. The mental part is a big part of working with horses. I know we are in a stats business, but I don’t get keep track of it that much. It comes down to doing the best that I can with each individual horse.”

The path to success was the result of long weeks, early mornings and late nights for the first-generation horsewoman.

But it’s exactly where she wants to be.

“I’ve been around horses my whole life. My mom would joke that my first word was horse. I’m a first-generation horsewoman, no one in my family was involved in racing. I was just obsessed with horses when I was a kid and I still am. I started riding at 4 and competed nationally in hunters and other events. I got out of college, and I was looking at the newspaper and looked at the want ads, and there was an ad for a caretaker to work for trainer Joe Pavia. I thought, ‘Wow, that looks awesome.’ I had never been to a horse race, but anything to get me around the horse, I was willing to do. I just fell in love with the standardbred breed. I’ve been around a lot of different horses, but standardbreds are the smartest, most willing to please creatures I have ever met.”

Bost also has high praise for the horsepeople she’s come to know during her 20-plus years in the sport.

“The harness racing community/family has been exceptionally welcoming to me. Being a first-generation horseman, with no ties to anyone, I was elated and gracious for the help that fellow horsepeople are always willing to provide. It is a competitive business but there are so many great people who will help each other. I do my best to not let a day go by that I don’t learn something new and count my blessings. You will never know it all and you have never seen it all.”

One of many things she has come to appreciate is that a little rest and relaxation is a very valuable commodity.

“It’s been a really great year. I’ve been very fortunate. It’s also nice to exhale a bit. We haven’t been trying to find any new horses right now, so I’m enjoying having a little breather. When it’s going full gear, it’s a 24/7 job, especially because we have our own little farm here and the horses are always with us.”

When she does look back on the year that was, Bost points to a few horses who enjoyed solid campaigns.

“Lord Of Misrule, I think we claimed him for $12,500 and ended up losing him for $23,000, but he had quite a few wins for us. Another claimer, Blow A Cloud N, was another nice one as well. Really, we had a lot of nice horses come through the barn. The unfortunate thing with the claimers is that they come and go, but you still make connections with them. We had a mare, Sweetonthebeach, who we just sold. She did pretty well for us. We sold her as a broodmare at the Harrisburg Sale for $37,000. We both her two years prior at the sale from Erv Miller.”

Then there is Keystone Sergeant.

The 6-year-old son of Explosive Matter has been win-shy over nearly 40 starts in 2021, but the veteran of nearly 140 career races holds a special place in Bost’s heart.

“He’s my pet. He’s a grinder and he tries so hard every time he races. I just love him. Steve, [trainer Salerno], my partner in life and business, the person who convinced me to become an owner and then get my trainer and driver’s licenses, keeps telling me. ‘You’re going to have this horse forever, aren’t you?’ And I always say, ‘Yep, pretty much.’ He’s just a great horse.”

Come the new year, Bost would like to add some more horses to her stable.

What would be the magic number?

“We’ve been up to 10 horses, but because Steve and I do most of the work, hands-on ourselves, I like giving the horses personal attention. Ideally, I’d like to have between 10 and 15. I’m comfortable with five, but I’d go up if that was ideal. We own them, predominantly, ourselves. I wouldn’t be opposed to bringing in the right person as a partner and I’d like to get some maidens or non-winners. We’re not looking at babies at this point in time because of the logistics of how we’re doing things. I love the babies, but it’s a long road. I like claiming horses, but I’d like some condition horses too. Obviously, it would be nice to have stakes horses as well. Ideally, I guess about 10 would be comfortable for us.”

Whatever the figure happens to be, each pacer or trotter that arrives at her barn will get individualized care, the goal always to keep one strong in mind and body.

Bost’s personal care plan has continued to serve her well.

It’s why her interpretation of success goes beyond the numbers as she prepares for the Pocono meet.

“I just focus on making them happy and that seems to be working out for me. I’m really grateful. I love turning them out and I also love to ride them, take them out on the trails and get their head in the right space. I think they perform a lot better when they’re happy. That’s what makes me happy. I am so grateful to be able to work with these animals, who continue to teach me.”