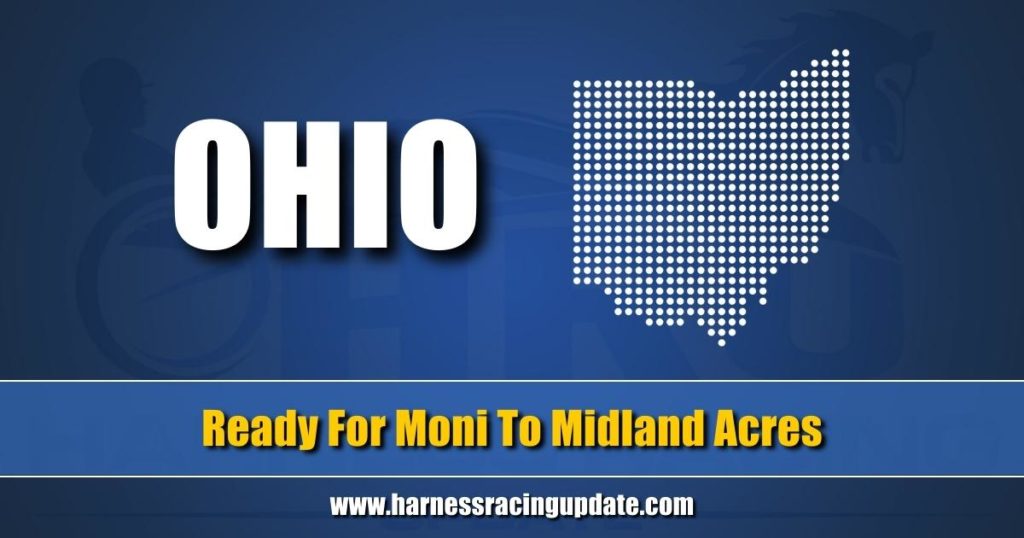 Ready For Moni to Midland Acres

For years, the farm has used the tagline “Doing our best to bring you the best” in its promotions, and bringing in a stallion of this caliber certainly fulfills that mission, according to management.

Ready For Moni, a striking dark bay who sold for $220,000 as a yearling, is by the world’s all-time leading money-winning trotter, the champion French sire Ready Cash ($5.7-million). Ready Cash is a two-time Prix d’Amerique winner and sired five of the last six winners of that international classic. His dam is Nothing But Moni, a daughter of the great Moni Maker, a $5.5-million earner, “Horse of the Year,” and dam of another promising young sire in Hanover’s International Moni.

Ready For Moni, the only son of Ready Cash to stand in North America, is an example of the efforts of his breeders, Lindy Farms and Moni Maker Stable, to produce superior horses by combining the very best of European and North American blood. That has created a stallion in Ready For Moni who crosses well with mares by most all of today’s top stallions, including those by Muscle Hill, Chapter Seven and their sons.

“That incredible pedigree, along with his looks, speed and ability, makes him a standout in the Ohio market,” said David Reid, whose Preferred Equine Marketing currently manages the syndicate of the incomparable Walner, and is working with Midland Acres in the syndication of Ready For Moni.

“We’re pleased he’ll be at one of the industry’s most respected farms in Midland Acres, which has such a long and storied history of breeding success.

“Top to bottom, the Ohio Sire Stakes program is one of the best, in terms of both money and number of stakes opportunities,” Reid said. “And being in close proximity to Kentucky and its enhanced sire stakes program gives breeders the option of taking advantage of dual eligibility.”

Ready For Moni won four of his first five starts at 2 and cashed in on his own dual eligibility by winning two Kentucky Sire Stakes legs and the $250,000 KYSS final. He went on to an illustrious 3-year-old season for trainer Nancy Takter that saw him win an elim of the $1,000,000 Hambletonian (second in final to Ramona Hill), a division of the Stanley Dancer Memorial, Goodtimes Trot and Zweig Memorial.

He added to his sparkling resumé this year at 4. Racing against the world’s best free-for-allers, he competed in such classics as the Cashman Memorial, Maple Leaf Trot, Dayton Trotting Derby, Caesars and Allerage and won the $250,000 Graduate Final at the Meadowlands in his career record of 1:50.3 (last quarter :26.2). He placed in the $650,000 Breeders Crown Open Trot to impressive winner Ecurie D Dk.

Those interested in acquiring shares in Ready For Moni are asked to call Midland Acres at (740) 437-7800 or Preferred Equine Marketing at (914) 773-7777. Interested parties may also email David Reid at davereid@preferredequine.com.