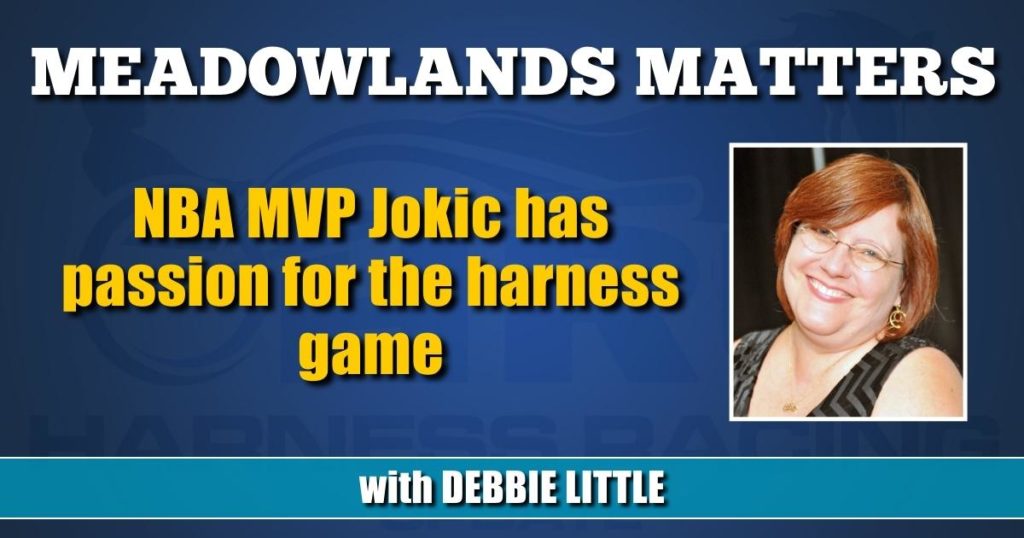 Passion for the Game

Reigning NBA MVP Nikola Jokic was in his glory on Friday when he jogged horses at Gaitway Farm in New Jersey and attended the races at The Meadowlands.

Nikola Jokic is used to racking up points on the court for the Denver Nuggets, but on Friday night (Dec. 3) he was piling up pics in The Meadowlands’ paddock instead.

The National Basketball Association’s reigning Most Valuable Player was in town to play the New York Knicks Saturday (Dec. 4) afternoon, but since he got to town on Thursday, he spent his day off on Friday with his buddy, Hall of Famer Tim Tetrick.

“He knew me from following me on Facebook,” said Tetrick. “And we started talking about two or three months ago about horse racing and he asked me if he could come to a farm and I said, ‘Any time.’ It worked out that he was in town for the weekend.”

Jokic, 26, grew up on a farm in Sombor, a city in the northern part of Serbia, where as a teenager he fell in love with horses, specifically trotters, at the track in his hometown and even worked there for six years cleaning stalls. He now owns his own farm with a training track and about nine trotters.

Since Jokic plays on the West Coast, trips to the New Jersey area don’t happen often but it appears he made the most of his time in town on this trip.

“He asked if he could come to the track [Friday night] and I said, “Sure. What do you want to do?” And he said, ‘I want to hang out in the paddock with you and the other guys,’” Tetrick said.

“I was telling him about Nifty Norman having two trotters that made a million dollars, the first time in history. And Nifty was in the paddock and I said, ‘Come here, I want to introduce you to Nifty.’ His eyes lit up like he was meeting Michael Jordan. He said ‘You’re Nifty? Wow.’ And he talked to him for 20 minutes.”

During their conversation, Norman found Jokic to be humble and genuine.

“I couldn’t be more impressed by what a good bloke he was,” said Norman. “You know, you meet professional sportsmen and most of them are a – – holes. He’s fascinated by the business. That’s all he wanted to talk about. He was more fascinated by us than we were by him.

“I said to him ‘Next time you come out, please get a hold of me and come down to the farm and see where I train.’ And he said, ‘We don’t play here again for a long time.’ Dude, any time you’re in town, Timmy or Ashley can put you in touch with me and you can some see the farm, come jog some horses, come see some yearlings, whatever you want to do. Hopefully, we get to meet again.”

Meadowlands’ marketing coordinator/TV talent Jessica Otten was informed in advance that Jokic might be attending the races so she could prepare for an interview.

“First off, I was scared I was going to get his name wrong, so I had him tell me his name a couple of times,” said Otten. “And he was like ‘Don’t worry if you don’t get it right, not many people do.’

“You come across some famous people and they’re not always humble sometimes and he was just so happy to be there. He literally walked around to every race before they went out and watched outside right on the fence and rode in the starting car and waited for Timmy to get off the track. It was so cool to see people outside of our world love it as much as we do.”

During his interview with Otten, Jokic talked about jogging that afternoon with Tetrick at Gaitway Farm.

“It was great, because in Serbia it’s not a really big sport,” said Jokic. “Here there is at least a lot of people into it and just to have 30, 40 horses around me, it was a really fun experience.”

Thanks to his relationship with Tetrick, Jokic gets to watch much more harness racing.

“When we first started texting back and forth, he said ‘How do I watch American racing?’” said Tetrick. “I’m thinking, well, he travels all the time and I said TVG. But he said, ‘Most hotels don’t have it.’ I said RTN is $10 a month. He said, ‘That’s amazing.’ And he texted back an hour later and now he follows everything. He watched all the Breeders Crowns and texted me after every race. I got a thousand texts from him in the last two months.”

He is viewed as one of the best passing big men in the game. Only he and Wilt Chamberlain, at 6’10” or taller, have averaged at least 7 assists per game. Chamberlain did it twice, while Jokic now has a hat trick. He also recorded the fastest triple-double in NBA history of 14 minutes and 33 seconds in 2018.

Jokic put up 32 points with 11 rebounds Saturday as the Nuggets beat the Knicks, 113-99. A game attended by Tetrick and several other horsemen who were given tickets by Jokic.

The Nuggets return to New York to play the Brooklyn Nets on Sunday, December 19. It’s impossible to tell if Jokic will have time to spend at The Meadowlands on that trip, but one thing that is certain is that as soon as the NBA season is over, he’s immediately on a plane going back home to his horses.

“Basketball is how he makes a living and the horses are his passion, that’s basically what he said to me,” said Norman.