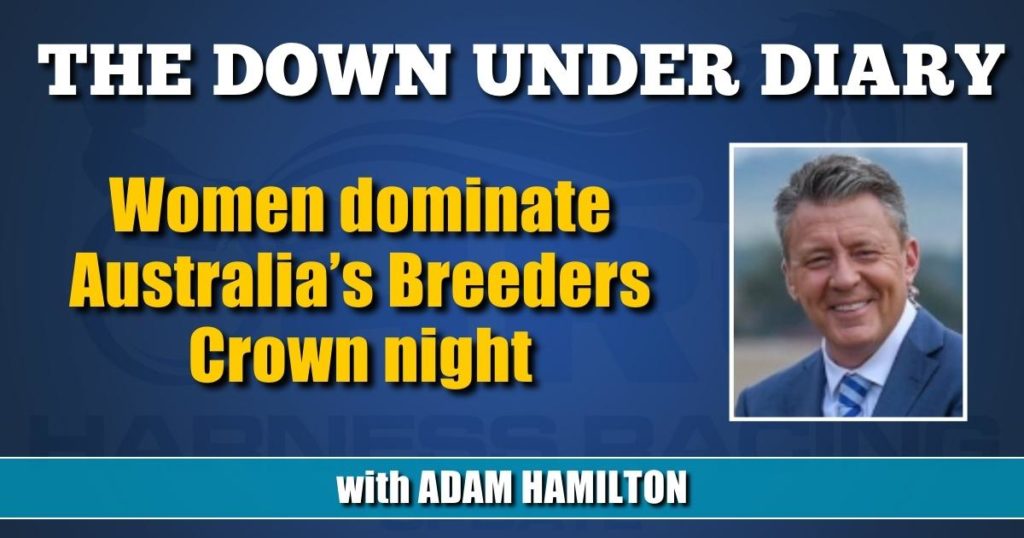 Beyonce said it a decade ago.

Girls run the world, or at least they did at Australia’s huge Breeders Crown race night at Melton on Nov. 20.

Females trained and/or drove eight of the 10 winners. And they trained and drove three of them.

Female trainers and drivers have long been a huge factor in Australian harness racing, especially Victoria, but this was next level stuff.

Stuart McCormick Kate Gath’s Breeders Crown victory at Tabcorp Park with Catch A Wave was one of just a string won by women.

Kate Gath drove two of them, Just A Bit Touchy and Encipher, and made it three Group 1 wins on the night when she teamed with her husband, Andy, to land the $A300,000 2YO pacing colts and geldings’ final with Catch A Wave, a brilliant son of Captaintreacherous.

Manning rewrote just about every driving record in Australia for a male or female at her prime and also drove former champion trotter Knight Pistol to win the Group 1 Harley Davidson Trot in Norway back in 1997.

Quinlan is one of only three female drivers to win Down Under’s marquee sprint race, the Miracle Mile in Sydney, which she did on Sokyola back in 2004.

Gath, 39, summed it up best: “I don’t really stop and think about things like that (females dominating) because it’s just part of the sport here. It’s great, it’s not about guys or girls, it’s about trainers and drivers.

“I’ve never been treated any differently because I’m female. All the guys have always welcomed me and treated me like they treat everyone else. I’ve never known it any other way, right from when I first started driving.”

Gath is charging towards successfully defending her title as Victoria’s leading metropolitan driver.

And Stewart is a lock for her seventh successive Victorian Metropolitan training crown.

The female theme preceded the night with the most-anticipated Breeders Crown final clearly being for an astonishingly strong crop of 3-year-old pacing fillies.

Historically, the champion Kiwi fillies have dominated when they’ve raided Australia, but the tide has turned.

“The breed and training has improved over here (Australia) so much, the Aussies have overtaken the Kiwis in a lot of ways,” champion driver Anthony Butt said.

“So many Kiwis wanted to tell me Bettor Twist would dominate in Australia, but I’d see lots of these Aussie fillies and I knew she’d be up against it, especially against Ladies In Red.”

Bettor Twist endured a hard run outside the leader, but Ladies In Red stormed home from well back to win running away in a record-smashing 1min53.1sec mile rate for 2240 metres.

Ladies In Red has raced 17 times for 14 wins and three seconds. She’s as good a filly as Australia has produced for 20 years.

She’s got that strong U.S. connection being by Mach Three out of the former U.S. race mare Kabbalah Karen B.

“She’s so good, you could put her in our biggest open-aged feature races and she’d be hard to beat,” Butt said. “She’s got it all.”

She get that chance in  race like the Miracle Mile in March, but for now, she’s sticking to her own age and sex to chase a fourth Group 1 level in the Vicbred final at Melton on New Year’s Eve.