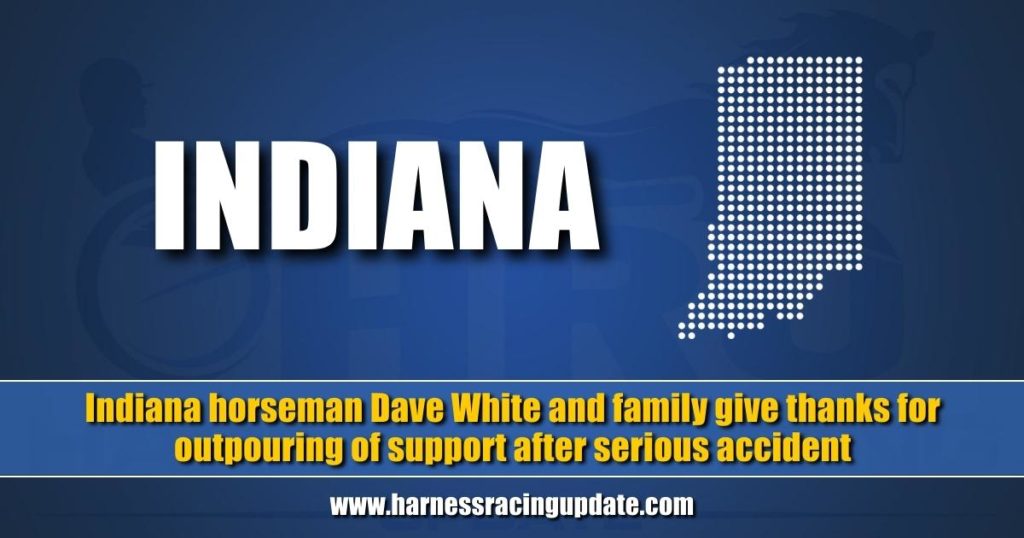 The Thanksgiving holiday often provides us the opportunity to pause and reflect on the blessings we receive throughout the year. This season, Dave White and his wife, Susanne, have much to be thankful for due to the giving spirit of their fellow Hoosier horsemen and women. White was recently injured in a training accident at the Indiana State Fairgrounds, and the racing community quickly stepped up to help through a GoFundMe campaign that has raised nearly $30,000 in only a few days.

“Unbelievable! What wonderful horsemen and friends we have. God has been great to us. Thanks for everything. Dave is on the mend a little. Still lots of pain and will be off at least through Jan 15th. Thank you friends and prayers to everyone,” reads an update provided by the Whites in the campaign organized through Jeff Fought.

White, a long-time trainer and fixture at the Indiana State Fairgrounds, recently sustained broken ribs and a punctured lung when training a young horse. The injuries required a few days in the hospital, but the 76-year-old is now resting at home and will need time to fully heal.

Fought first heard about the incident prior to the Midwest Mixed Sale, held Tuesday (Nov. 23). A breeding to second-year Indiana stallion Capt Midnight was auctioned off before the sale, with proceeds going to the couple. The breeding brought $4,500. After the sale, Fought, who manages the Midwest Mixed Sale, talked to a friend who suggested a GoFundMe campaign should be created. He took the reins and created the campaign and has been amazed by the response.

“I had never set up a GoFundMe campaign, so I didn’t know what to expect,” said Fought. “The response is overwhelming. It shows how respected Dave is in the Indiana racing community.”

The goal for the fundraising effort was originally set at $5,000. That was met within hours. Through Saturday afternoon, the campaign has received 100 donations and stands at $28,805, with anonymous donors stepping up to contribute sizable amounts as certain thresholds were reached. An anonymous donor has pledged $5,000 once the total reaches $30,000.

Dave and Susanne are not only mending physically, but also mentally and emotionally. Tragically, Dr. James Myers, an owner and close friend of the couple, perished as a result of injuries sustained in the accident. Myers, 78, practiced medicine for more than 40 years in the Hoosier State and was a regular visitor to the stable. Myers and White owned Dreamstyle Herbie in partnership. The son of Here Comes Herbie won an Indiana Sires Stakes elimination at 2 and captured a consolation at three while finishing second in two eliminations. He earned $82,717 over two seasons.

If you would like to contribute to the GoFundMe campaign, you can do so by visiting here.