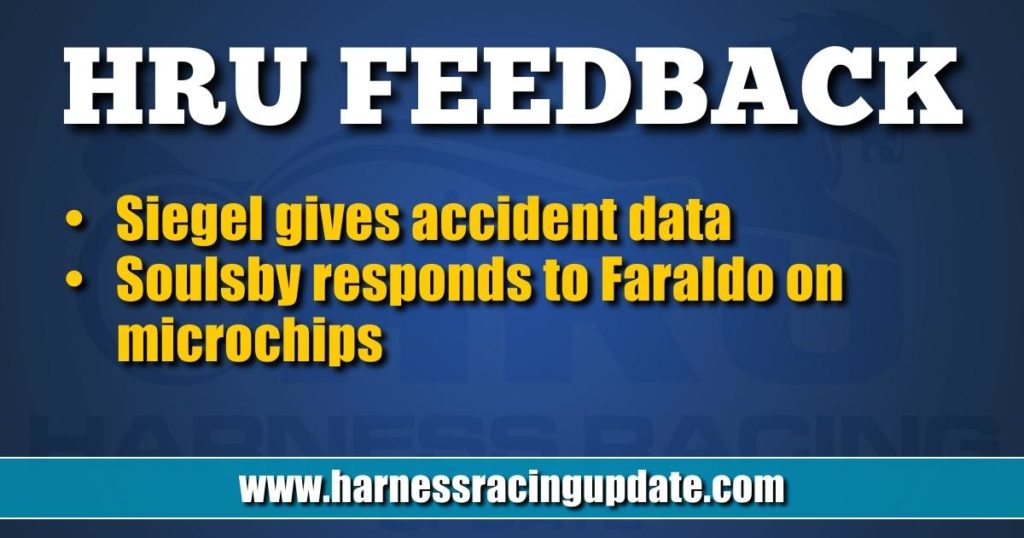 The prevalence of harness racing accidents had DECREASED in the last 12 years, though there has been a slight uptick in the last three years. However, the numbers themselves (provided by TrackMaster using USTA data) are so relatively small, one needs to look at a number of years to draw any reasonable conclusion. My conclusion is that the number has decreased overall from 15-20 per 1,000 races rate to the 10-15 per 1,000 races.

I wanted to see the actual data and here it is. The table below counts a race as an accident race if one or more horses has in its running line record an “AC” [for accident] or “FL” [for fell] indicator in any US race.

With the facts above, several have opined about rates increasing, rather than why they have decreased. The question should be what is an “acceptable” rate and if we as an industry want to reduce the rate for whatever the reason, what can be done to reduce it with having a minimal impact on the sport? Nearly all sports have introduced rule, equipment and protocol changes to improve the safety of the sport.

Further study would need to be done on the causes of accidents in order to know how to approach the objective. For example, if hooking wheels were responsible for 25 per cent of the accidents, one might look to a sulky modification to prevent such accidents. If one saw that accidents were disproportionately caused by rookie drivers, perhaps licensing provisions should be made more stringent. To do this, the USTA (group best suited) would need to make some database and entry changes for the chart callers to enter details about an accident and/or the USTA staff would review video, possibly talk to the participants, and to do this database work itself. Given the number above, we are talking about a pretty small effort on a go forward basis (a bit more than one per week on average in recent years). A retrospective analysis could also be done, but it is a bit more shakey using only video. But this would only make sense if there is a strong motivation to reduce the number of accidents.

Soulsby responds to Faraldo on microchips

I sent USTA chairman Joe Faraldo an email replying to his HRU Feedback published on Nov. 21 (full story here), and did not plan on addressing his rebuttal here, but feel it merits an open response. Mr. Faraldo once again implies that we are anti-chip. Our rule change proposals only ask for the USTA to continue to provide what they have given our horses for the last 25 years, a visible ID. To continue to freeze brand actually brings them into compliance with their own rule, in the current rule book, addressing horse identification, which I will again provide. It is Rule 7.06 “No horse that has not been tattooed or freeze branded and implanted with a microchip as authorized by the USTA will be permitted to start at an extended pari-mutuel meeting unless the permission of the presiding judge is obtained… How is what is printed in our rule book, a false narrative?

Beyond that, he claims microchips are far superior to freeze brands. How so? In what regard? Simple, low tech, freeze brands are not only recommended by the Equine Protection division of the Humane Society of the United States, but in a Texas A&M study are described as follows: “Freeze branding can be done on horses of any age. It appears painless and does not scar or damage the horse’s hide. The brand is legible, permanent, and difficult to alter. It can be seen from a distance.”

Faraldo described chips in this manner: “The microchip is inserted into a ligament, is the size of a grain of rice and cannot be easily removed, and it does not migrate on its own.”

My question is then how does it migrate, as we have heard first hand cases of two chips in one horse, and chips migrating to their shoulders, and chips on both sides of their neck with two different sets of ID, and this gem: “One of my horses was chipped a few weeks ago. A day or two later, the groom was sitting in the stall with him petting him on his neck. The chip had come out and was hanging there. If she hadn’t seen it, it would have just fallen off and no one would have known. So not so reliable.” There are certainly appealing points to microchips and scanners, ease of use at the track when racing, to name one, but to infer they are superior is also false. Again, both freeze brand and chip, together create an extra layer of protection for our horses.

Mr. Faraldo also claims that New Vocations and other groups do not wish the USTA to go back to freeze branding. If we are to believe this is New Vocation’s position, then they are the only horse adoption group, of dozens I know of, that support making horses hard to identify. While New Vocations is very good at what they do, and I applaud their efforts, they are not operating a rescue organization, like SRF, and thankfully, many other organizations, and individuals, working to help standardbreds get out of dire circumstances. The horses New Vocations receive are donated, not pulled from “kill pens”. Therefore New Vocations is not qualified to speak to the importance of a visible ID.

While I, and others,  continue to work towards the passage of rule change proposals 4, 18, 20, and 21, which all relate to keeping freeze brands, along with micro chipping, please keep these points in mind. Thank you.

I love David Bernstein’s suggestion (full story here) that a way to attract new fans to harness racing is to have Saturday Open Houses at the Training Centres with food trucks etc. I would add building bleacher seating overlooking the track where possible. There is no question that seeing horses up close and personal develops interest.

New fans leads to new ownership which leads to a problem that no one seems to want to solve. Why can’t 25 friends go together and buy a horse? Licensing, that’s why. In some jurisdictions, only those who own 5 per cent or more of a horse require a licence. In other jurisdictions, even those that own as little or less than one per cent are required to go through the licencing process which, believe me, turns many people off. More people would join ‘fractional ownership’ groups if this was not the case. And many times ‘fractional owners’ develop a broader interest and want to buy bigger shares in horses. In those cases, I have no issue with them requiring a licence.

For some time now I have been writing about our regulator’s shortcomings and the negative effect their lack of effort has on our public perception and overall future.

A lingering issue the questionable New Jersey Racing Commission (NJRC) policy of not interviewing drivers involved in a race incident that requires an inquiry has been highlighted in the 2021 Meadowland Pace. This highly irregular deviation from the industry norm of obtaining key information from drivers has been put on the front burner via the Charlie May placing in the Meadowlands Pace. Charlie Mays owner has filed an appeal since this specific policy has denied his right to due process protocols that clearly would influence the presiding and associate judges’ decision. This past weekend, the NJRC “no call” policy was on the agenda for a presiding judges’ meeting at The Meadows where it was announced that the policy has been rescinded.

It is not often you read about accolades for our regulators albeit “kudos” to the NJRC for pro-actively correcting a policy that infringed on the rights of their constituents. This development should have a critical impact for Charlie Mays’ owner Don Tiger’s appeal.