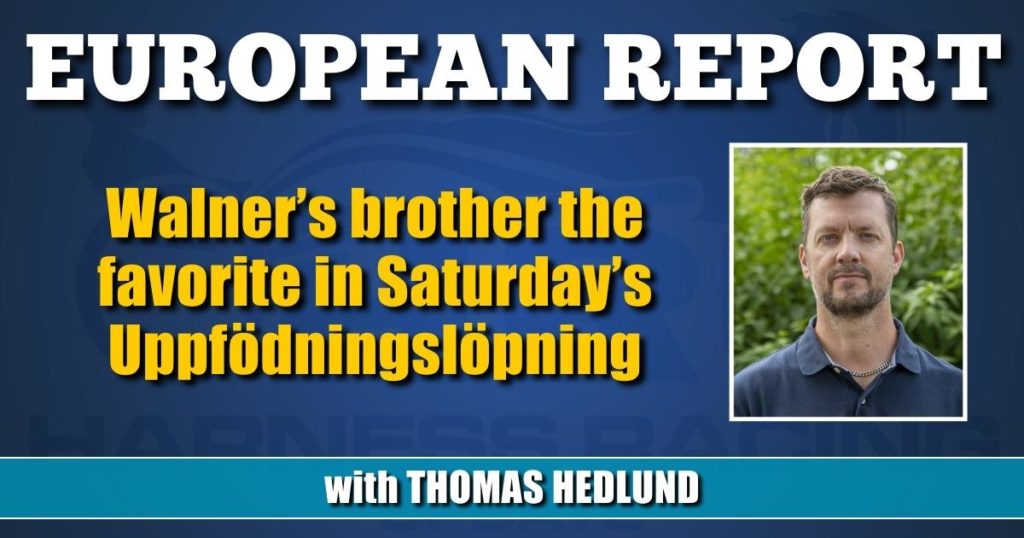 The $315,000 Uppfödningslöpning for 2-year-olds is on Jägersro’s race card this Saturday (Nov. 20) and a very interesting trotter has charmed the Swedish harness racing fans during the fall. Riina Rekilä’s Tetrick Wania (Muscle Hill—Random Destiny) will enter the Saturday’s race as heavy favorite and the 2-year-old half-brother of Walner has showed abilities that most probably will make him hard to stop at Jägersro.

Riina Rekilä will drive the horse, as in most of the horse’s starts so far, even though Tetrick Wania was sold to German owners after the elimination win at Jägersro two weeks ago.

“I see no reason to move the horse from Riina, although, of course, I would like to have him on my own farm outside Berlin. Riina knows the horse best and the start in the final of the Uppfödningslöpningen will be his last start for this year and I find no reason to move Tetrick Wania from his usual environment,” said the new owner Karin Walter-Mommert to Danish website www.travservice.dk.

Alessandro Gocciadoro-trained Global Trustworthy (Muscle Hill) was best when the final of the $175,000 Gran Premio Palio dei Communi was held in Montegiorgio, Italy on Sunday (Nov. 14).

Elimination winner Night Brodde seemed to have the race under control in the lead, but from second over, Global Trustworthy finished strongly and disarmed brave first over Akela Pal Ferm shortly before the wire. Global Trustworthy won in 1:54.2.

Seventeen trotters will gather around the black track of Vincennes on Sunday (Nov. 21) when the first out of four ”B-races” ahead of Prix d’Amérique is on the schedule.

The $125,000 Prix de Bretagne over Prix d’Amérique-distance 2,700 meters (1.6 miles) is traditionally the first race on the road towards the big battle in Paris at the end of January and world champion Face Time Bourbon (Ready Cash), who is coming off a nice victory in Italian Lotteria in Naples, doesn’t really need to win the race on Sunday, but he is by far the most merited trotter in the field and it will probably be tough to stop him from entering the winner’s circle at Vincennes.

Three horses will secure their spot in Prix d’Amérique, respectively, and an interesting factor in the race is that Italian champion Zacon Gio is now trained by Jean-Michel Bazire.

The 5-year-old mare has been impressive in several starts for her new trainer and in Prix Marcel Laurent (open for 4- and 5-year-olds) driver Franck Nivard found a position in fifth over. With a half mile to go, the duo attacked three wide and landed outside of leader Ganay de Banville, who was defeated in mid-stretch and Ampia Mede Sm came home in mile rate 1:53.2 over 1.3 miles.

The victory in Prix Marcel Laurent was the Italian bred trotter’s sixth consecutive win in France.

Dutch trained best in The Netherlands

The $75,000 Prijs der Giganten at Victoria Park in The Netherlands was on the schedule on Friday (Nov. 12) and Dutch trained-Mister F Daag (Conway Hall) managed to disarm strong opponent Vernissage Grif over the home stretch.

Driver Robin Bakker sat behind Paul Hagoort trained Mister F Daag and from post 1 behind the gate, Mister F Daag was sent to the lead. First choice Vernissage Grif was pushed to the lead after 600 meters and Bakker could wait with the attack from the pocket since first over trotter Feydou Seven was beaten with a quarter of a mile to go.

Mister F Daag bested leader Vernissage Grif shortly ahead of the wire and won in a stakes record of 1:55 over 1.3 miles.