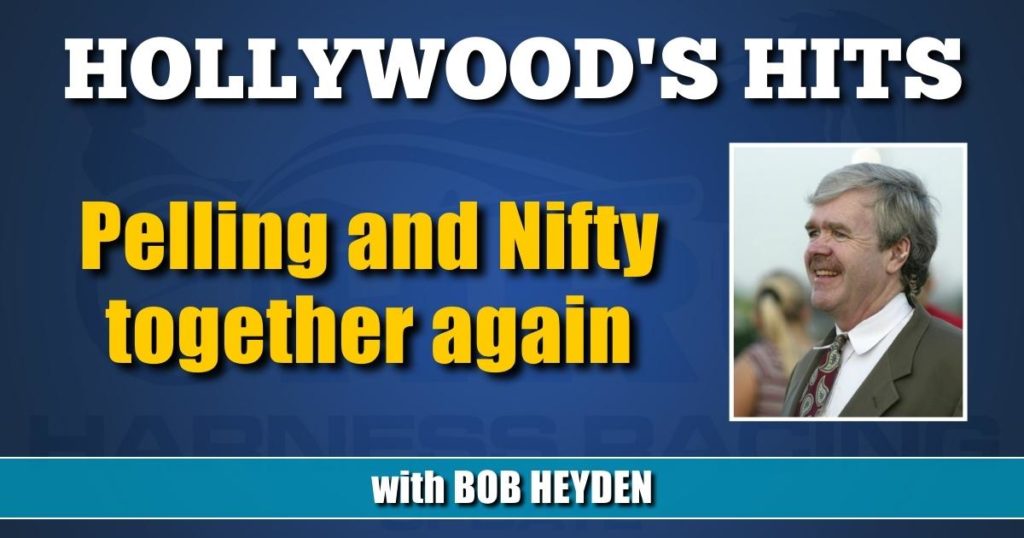 Pelling and Nifty together again

If Test Of Faith is named Horse of the Year and either Bella Bellini or Venerable is runner-up — or vice versa — it will be trainers Brett Pelling (Test Of Faith) and Nifty Norman (Bella Bellini, Venerable) right at the top, just like they were in their final year working together in 2005 with Horse of the Year Rocknroll Hanover. They were a dominant and inseparable pair from 1988-2005 winning more races and money in that span than any others at the Meadowlands.

If Test If Faith is named HOY that will mean her driver David Miller will have had a HOY in three straight decades — No Pan Intended in 2003 and Always B Miki in 2016, prior.

If Test Of Faith prevails it will make some history not done in 45 years. It would mark two consecutive HOY winners sired by a 20-something stallion. Art Major sired Test Of Faith. Last year’s HOY Tall Dark Stranger was sired by Bettors Delight. Both are 22. The last time two 20-something sires had the HOY consecutively was in 1975 and 1976. Stars Pride was 28 when he had Savoir in 1975 and Bye Bye Byrd was 21 when he had Keystone Ore in 1976.

If the two sophomore fillies (Test Of Faith and Bella Bellini) do indeed go 1-2 it will be Deja Vu from exactly 20 years ago when Bunny Lake and Syrinx Hanover filled out the top two spots — a pacing sophomore filly (Bunny Lake) over the trotting counterpart in 2021.

One more HOY note for 2021, none of the following outstanding sires has produced a Horse of the Year: Artsplace, Western Hanover, Muscle Hill, Somebeachsomewhere, Nevele Pride, Captaintreacherous and Chapter Seven.

Brett Pelling on his 2021 season: “I want to stay around 300 starts a year. I am comfortable there. We have had a great year with likely two divisional winners and maybe Horse of the Year. My earnings per start is number one in North America. That is the number I am most happy about.”

Jujubee is heading to North Carolina for the winter at Chris Coyle’s Olive Branch Farm. Among his neighbors there will be Sam Bowie’s Hot Mess Express.

“He wasn’t eating well the week of the Breeders Crown,” said Jujubee’s trainer Greg Wright, Jr. “I had a pep talk with him telling him ONE MORE TIME! I think it worked.”

Here’s a couple of odd stats out of this year’s Standardbred Horse Sale Company auction in Harrisburg, PA: Archangel was the only sire with two Super Final winners in Canada, yet had just one yearling in the sale.

Jujubee is the outstanding sophomore trotting colt of 2021, yet his sire Creatine had no yearlings in the sale.

Creatine, the horse nobody wanted

It didn’t start out well. Creatine, a foal of 2010, arrived in Donny Richards’ barn in Maine in bad shape later in his yearling season about to turn 2. Now in his 80s, a legend in Maine revered by many, Richards remembers it all.

“He came in and we put him in the end stall. Chris Bowden — Adam’s brother — brought him in for Diamond Creek. He didn’t look very good… not at all. His right hind was sagging bad. It turned out he had an infection down lower in that area that was affecting him something awful. I only knew him as ‘that Andover Hall.’

“One day Chris asked me if I wanted him. He’s yours if you want him, he said. No thanks. I wouldn’t even take him as a gift. I said, ‘I would rather train him and charge you a training bill than own him myself.’ I continued to work with him and jog him. Mostly on the sand track. I had to build up his back hind end. In all the time I spent with him he never made a break. I never timed him at all the first four months.

“One day, I took a watch and he went in 2:20. First time I ever timed him. It must have been around April. Next time it was around 2:12. I still didn’t know his name at this point.

“I took him to the track one day and he worked in 2:02 and I came back and told one of the guys in the barn what he had just done. ‘You better double check. I think your stopwatch is busted’ was what I heard. But someone ELSE was timing him too and got him in 2:01.4. Now I knew for sure that he was all right — and I knew his name, too.

“We didn’t have a trainer in mind for him because nobody ever thought he would turn out like this. So we called Bob Stewart and he took him. He called soon after and told us he was better than anything he had. He was entered at the Red Mile soon after and I was just hoping he would get a piece of it, it was a stake. He WON! Mike Lachance drove him and was very impressed.”

Did you ever think this colt would go on and win the Kentucky Futurity, the Breeders Crown and $2.1 million?

“No. Certainly not early on. But we knew that he would hold his own and he turned out to be a great one — one who sired Jujubee this year.”

Ambassador Hanover will race at 4. Nobody was more unlucky than he in the Breeders Crown.

Can Dexter Dunn make it three for three, as in three full seasons in North America and three Driver of the Year titles?

Trainer Jack Darling bought one yearling at Harrisburg, the sister to his current standout Bulldog Hanover.

Team Pinske bought seven in Pennsylvania and will go south with 17 babies heading into 2022 overall.

When Ocean Rock crossed the wire first in the Breeders Crown, it gave brothers Rockin Image and Rockin Amadeus each a Breeders Crown credit. The 2015 Crown winner Freaky Feet Pete is the richest son of Rockin Image.

Tim Tetrick turns 40 on Nov. 22. Eight of the top 10 money seasons in the sport’s history belong to him.

A lot can change in 15 years

What can change in a measly decade and a half? In Hall Of Famer Joe DeFrank’s world quite a bit. In 1965 at Freehold, he was the race secretary and the track announced claiming races from $800 to $3,500 would be held. Fifteen years later, he was the man behind the very first $1 million dollar race won by Niatross and the first $2 million event taken by Land Grant just three weeks apart in the summer of 1980.

Chris Ryder has had a parade of great pacing fillies. Niki Hill added to Party Girl Hill from just last year on top of all-time greats I Luv The Nitelife and Put On A Show. And don’t forget the single-season, million-dollar winner Cathedra Dot Com (2001). Ryder also had Mystical Sunshine, a trotting lady that won consecutive Breeders Crowns.