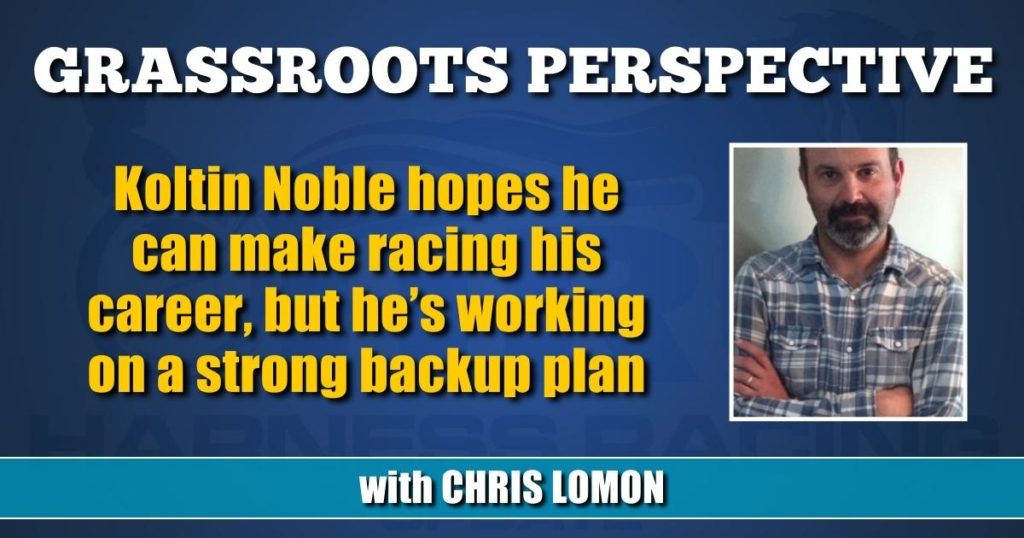 Koltin Noble hopes he can make racing his career, but he’s working on a strong backup plan

Koltin Noble is ready for take-off

The driver from Ohio is a young man with a plan. Or in this instance, plans.

“I love racing and I hope I can do it for a career, but I’m in an alternative school for aviation maintenance,” said the 17-year-old Noble, whose standardbred family includes his late grandfather, Hall of Fame driver Sam “Chip” Noble. “I wanted something stable just in case this doesn’t work out. I’ve always been interested in aviation. My grandfather, Chip, had his pilot’s license, and his brother is a private pilot. I’ve always loved planes and wanted to be around them. So, when I had an opportunity to do something with aviation, I jumped at it. My family has been in the sport for a long time, and they have been supportive of me, but they want me to look at other options too. They just really want me to do what I want to do.”

These days, his runway, so to speak, is at various racetracks throughout the Buckeye State.

So far, his time, albeit short, in the race bike, has gone well.

His one and only drive from 2020 yielded a second-place finish. This year, he’s recorded two wins, four seconds and a third from 11 starts.

Noble’s biggest successes to date have come courtesy of Ubuntu, a 4-year-old gelded son of Pet Rock, who delivered Noble with his milestone first win.

“It came at Eaton (a half-mile Ohio track),” he said. “I tried to leave out of there with the horse. I wouldn’t say I got stung going to the quarter, but I struck front and never looked back. I really like Ubuntu, the horse of my dad’s that I’ve been driving this year. It took a while to figure him out. He’s quirky. He’s easy to drive, but he’s a little wavy. He’ll only do what he has to do.”

Not that Noble is bothered by those mannerisms.

He’s already developed an appreciation for the different skill sets each horse brings to the racetrack.

“That’s a really great thing for a young driver. The different they are, the better it is. All that does is teach you more about the sport and what it takes to be successful. I feel like I can drive in different ways. I don’t have to just be on the front or in the two-hole. I feel confident coming from the off the pace and I’m just as confident racing on the lead. I think being able to feel comfortable driving wherever you find yourself is a really helpful skill.”

Noble has also leaned on some of the encouraging words he’s heard along the way, whether they come from family, friends, fellow drivers or horsepeople.

“Love what you do. That’s what I’ve been told by lots of people. And that’s exactly what driving is for me. I truly enjoy it. People also talked about being open to learn, to listen to people who want to help you and to pay attention to anything that could help me. You don’t know everything and one of the best ways you can move your career along is to educate yourself with as much knowledge as possible. You can always learn something every day.”

And that’s his mission each time Noble puts his wheels on the racetrack.

With the year soon coming to an end, he’s happy with what he’s achieved so far, but eager to chase more wins.

“This year, the goal was to just get out there. I didn’t really set too many high expectations for myself. I felt lucky to even be there. Going forward, I’ll probably start to set more goals for myself, whether that happens to be wins, purse money or state-wise, meaning where I’m racing. So, I guess short-term goals for racing are to just break in as a driver somewhere, whether it’s 10 horses a week or 20, that would be a goal within a year. Long term, I’d like to make it somewhere and be in the top three in the standings. I think it really comes down to that I just want to do well.”

Whether that happens to be in aviation school or piloting pacers and trotters, Noble is happy with where he’s at in life.

He also feels fortunate to have found a common bond between the two callings.

“I don’t have any hobbies outside of horses and planes. Those are my two biggest passions. They are both big adrenaline rushes. The acceleration part of both is really exciting. When you are getting ready for take-off, when you are speeding down the runway, that’s a huge rush. And when you line your horse up on the gate and start to pick up speed, it’s a similar type of feeling.”

Love what you do, right?

“That’s the big thing that truly matters. I’m really having a great time being able to drive, being able to push myself and trying to get better each and every day. I wake up each morning and I feel happy.”