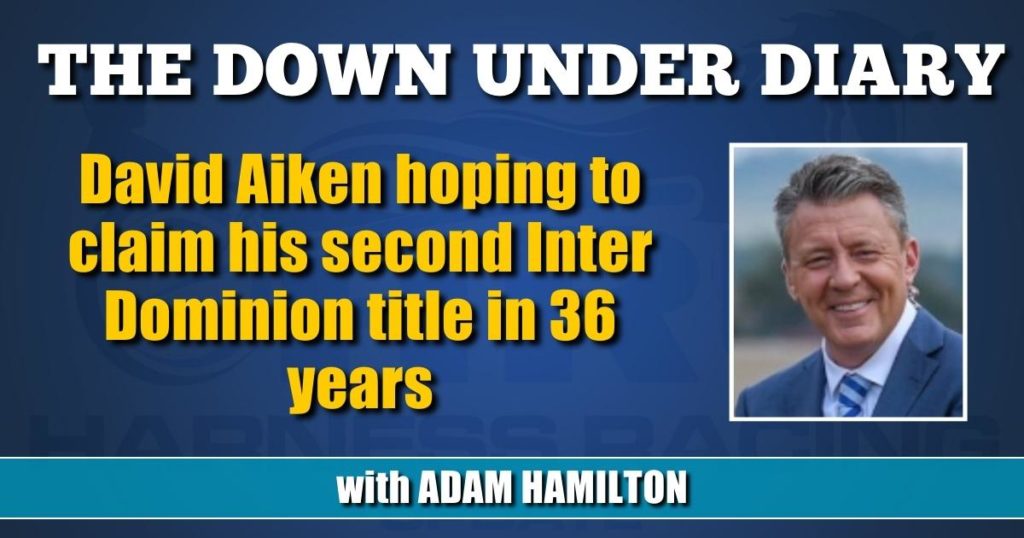 The highly-respected horseman is hoping to build on his record of 15 Inter Dominion finalists when he and son, Josh, take four horses from their Nagambie base in Victoria to NSW for this year’s event which starts on Nov. 27.

The Inter Dominion is the biggest event Down Under and it was love at first sight for highly-respected horseman David Aiken.

Wind the clock back to 1985 where the champion of the time, Preux Chevalier, won the Melbourne Inter Dominion final at Moonee Valley in front of almost 45,000 fans. It’s the biggest modern-day crowd Moonee Valley has housed and remember, this is the racetrack which still plays host to one of the world’s great thoroughbred races, the Cox Plate.

Aiken was a relative “whipper snapper” when he took his pacer Toby Duane down for the Inter Dominion, consisting of three compulsory rounds of qualifying heats into a final – all run in the space of just two weeks.

Stuart McCormick David Aiken said of his four Inter Dominion hopefuls, he thinks Max Delight (shown winning the Victoria Cup at Bendigo with Chris Alford in the sulky) is his best chance.

“Imagine what a buzz it was making the final at my first attempt and then running fifth,” Aiken said. “The Inter Dominion was everything you dreamed of as trots person at the time and still is the ultimate to me.

“I’ll never forget the feeling of going out on the track with Toby Duane for that final. The horses were welcomed like rock stars and then there was a pause and they introduced Gammalite. He was having his last start and he was not only a champion, but a real people’s horse. I heard the crowd erupt and I was way over in the back straight.”

Gammalite won 94 races, including becoming the first back-to-back Inter Dominion winner, and banked a staggering $1,386,480 (AUD) way back in the early to mid 1980s.

“He went great. It took a stunning drive from the man they call the Inter Dominion ‘King’, Brian Hancock, to beat us that night. He was a wonderful horse, Ultra Jet,” Aiken said.

“I had some good contacts in the U.S. and am still really close to many of the top trainers over there now and that helped me when it came to Ultra Jet’s owner Steve Finklestein picking a trainer Down Under.

“I’ve got so much to thank Ultra Jet for, he started a lifelong friendship for me with Steve. I’ve still got horses for him now. Just recently I trained Leonidas for him over here before he went across and started doing so well in the States.”

Aiken had to wait 30 years from his first attempt with Toby Duane to finally win his first Inter Dominion final.

“After Ultra Jet, I thought, ‘Gee I’m getting close now,’ but it wasn’t as easy as that … but that’s the great thing about the Inter Dominion, I guess,” he said. “When I finally did (win) with Lennytheshark (2015 in Perth), it was so incredibly special, made even more so by having most of my family across there with me.

“Lennytheshark was a great horse. I’ve had some really good ones, but he’s the best. He was so talented, so versatile and so brave.”

Aiken said he is hoping to build on his Inter Dominion record of 15 finalists and that one win when he and son, Josh, take four horses from their Nagambie base in Victoria to NSW for this year’s Inter Dominion, starting at Menangle on Nov. 27.

The series moves from Menangle to Bathurst on Dec. 1, then to Newcastle on Dec. 5 before the Grand Finals (for pacers and trotters) back at Menangle on Dec. 11.

Leading his charge is recent upset Victoria Cup winner Max Delight, but he’ll be supported in the pacing division by Malcolms Rhythm and Sirletic. The Aikens are also taking talented mare Aldebaran Crescent up for the trotting series.

“None of mine are top seeds, but they are good enough to put themselves in the right spot and win good races with the right run. They’ve shown that,” he said.

“I’d lean to Max Delight. He’s beaten King Of Swing in the Victoria Cup recently and King is a clear favorite to win the Inter Dominion final.”

Josh Aiken chipped-in to disagree: “Nah, I think Malcolms Rhythm is our best hope. He’ll thrive on four runs in a fortnight and when they get to the 3,009 metres of the final, he’ll love every step of it.”

But the last word belongs to David Aiken: “Josh might be a bit biased there. He’s going to drive Malcolms Rhythm through the series.”

Given David Aiken’s many friends in the U.S., he won’t be short of people cheering if he can get one or more through the Grand Finals.