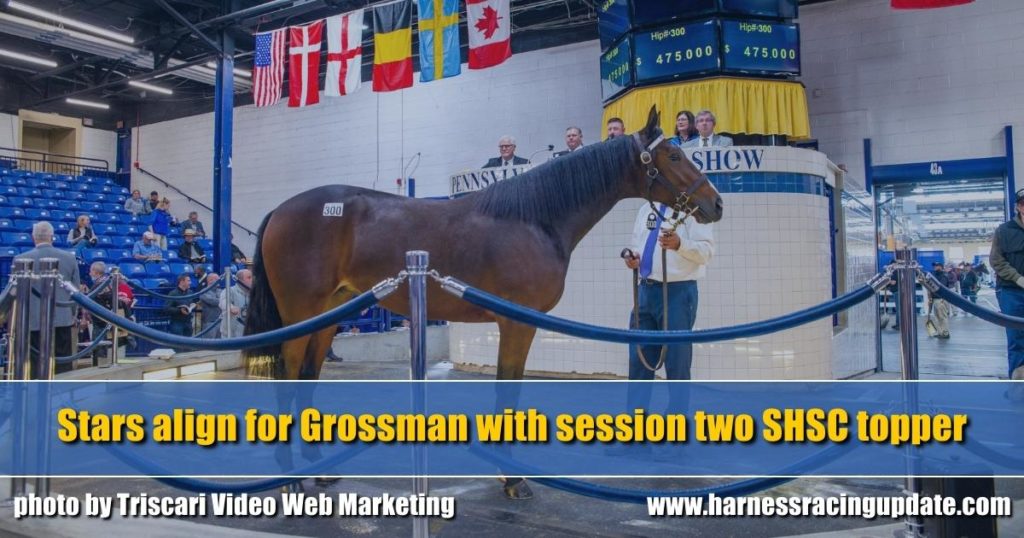 A serendipitous collision of trotting mare blood on day one carried into day two of the Standardbred Horse Sales Company (SHSC) yearling sale. The maternal lines of Atlanta and Manchego rung the highest numbers of the sale but their one-time rival Plunge Blue Chip – the trotting mare who broke sub-1:50 ground – stole the show Tuesday (Nov. 9) with her half-sister attracting the largest bid of the second session.

“It’s a great family that’s been very important to us for a long time,” Tom Grossman owner of Blue Chip Bloodstock said, “but also we knew the 2-year-old that we sold last year [Threepointbluechip] was a really good horse but the people were very patient with him and just got him going in the Matron, a week before we got down here. That really helped. They’ve done a great job with him and that’s part of the luck, selling them to people that are going to do the right things with them.

“The family, obviously, is very deep with the 3-year-old that was third in the Breeders Crown this year and then the 2-year-old won the Matron and Plunge is Plunge. It was all good.”

Plunge Blue Chip, an earner of $1.5 million through her four-year career, became the first trotting sophomore in history to go a sub-1:50 mile when winning the $128,500 Del Miller Memorial on July 14, 2018 in 1:49.4 and beating Manchego in the process. She won only one more race below the 1:50 barrier when blitzing Atlanta and Manchego to score a 1:49.4 win in the first heat of the 2018 Kentucky Filly Futurity.

“Plunge [Blue Chip] raced more effectively than people remembered against Atlanta and Manchego – they were the sales toppers yesterday and she got her turn today,” Grossman said. “And [she] beat both of those fillies at times. When she was right, you know, [she] was everything they were at 3 and 4. They both went on to be fantastic older horses, but they were a class together and it was our turn.”

Unicorn Blue Chip became the highest-priced yearling ever sold by Blue Chip Bloodstock in the 20 years Grossman has been selling yearlings.

“You have to have the right product and then everything has to line up right,” Grossman said. “We’ve never sold one near that price. Above $200,000 or $250,000 then the stars just have to align and two of the right people have to like it… any consignor will tell you, but there’s times you sell a horse for $200,000 that the guy would’ve gone to $350,000. You just need the second guy. So, everything needs to align perfectly.”

Conditioner Lucas Wallin struck the winning bid and signed for ownership as agent on Unicorn Blue Chip. Much of her appeal to Wallin came from the names on her page and, of course, her confirmation.

“Of course the page and the way she looks – she looks really, really good,” Wallin said. “She’s a little on the smaller side, but she’s a beautiful, correct filly. Plunge Blue Chip was a lot bigger. Most of the Chapter Sevens – the good ones – I think are not too big, you know. They are a little on the smaller side so I wasn’t worried about the size. I figured she would go very high, trotting fillies especially, so we were prepared to go high. That was a lot of money.”

“That’s more important, the average,” Grossman said. “If you’re in this business and paying stud fees and you’re maintaining 700 acres of land, the average is what matters and the average has been good.”

Walner fever and the previous ‘Chapter’

Chapter Seven held a strong presence all through day two in Harrisburg. He sired the session leader but his leading stallion Walner has continued to buzz the sales ring. With his first crop active and racing, the enigmatic speedster had his second crop roll through Lexington to lead all stallions with a sale’s average of $160,792 from 48 yearlings. In Harrisburg, Walner continues to dominate and leads sires with an average of $180,944 from 18 yearlings with just one more set to sell on Sunday.

“It’s Walner fever and rightfully so,” said Dave Reid, syndicate manager for Walner. “Obviously, he was a very precocious 2-year-old. I don’t need to educate anyone on Walner and his accomplishments. Linda (Toscano) was quoted as saying that she thought he could’ve been a better than [1:]50 trotter. She was a believer right from the beginning and so were the people that backed him – bought shares in the horse and they bred to the horse. A lot of the credit has to go to the breeders and 2022’s book will probably be the best book of mares that he’s going to have. Obviously, his first book was good and, as it does with the second, third and fourth season… he still had a full book, but I would expect the quality to be outstanding this year.”

Walner sired the day’s second-highest sale with Hip 187, a filly named Won Liner. Ake Svanstedt struck and signed the winning bid of $310,000. “It was too expensive, of course,” Svanstedt said with a laugh.

“The family was not top, but it was good on the mother,” Svanstedt said. “It was a nice horse.”

“She’s a little more like Credit Winner in her back,” Blais said when asked of the differences between his Walner colt and filly. “More feminine. She looks like a filly and I like that. Different enough – with the head they look like a Walner. She’s a nice looking filly. Relaxed and mature. Really looks in control of herself. She looks cool, you know. Good pedigree – the brother [Saverio Hanover] looks good. I checked the line and he was second in [1:]55 a couple of weeks ago.”

Blais bid $250,000 to win the auction, a price which beat the expected amount he anticipated she would bring.

“I think cheaper than that. I was expecting less. I think always less,” Blais said with a laugh. “That’s the market right now. She’s a Walner and she’s from a good farm, too – Hanover Shoe Farm. That’s a good farm.”

In respect to Walner’s sales success, his sire – Chapter Seven – remains dynamite in the ring. He ranks third in Harrisburg among stallions with an average of $158,273 from 22 yearlings. Other than his own offspring, the only stallion trumping Chapter Seven is Muscle Hill, who has averaged $165,300 from 20 horses.

Richard Gutnick, owner of Chapter Seven, found – with recommendation from his trainer Toscano – a match-made Chapter Seven yearling midway through the afternoon. Going partners with an owner in the Muscle Hill syndicate, Gutnick signed for the Chapter Seven filly Sadie Hanover, out of the Muscle Hill dam Southwind Percy, for $240,000 – the fifth-highest price of the day.

“We saw the prices are running very high in the sale and we’ve been the underbidder on a number of them. I owned Chapter Seven, so the fact that she’s a beautiful filly from Chapter Seven… she was worth a go. We have a couple of other people who wanted to come in, so I promised them I’d try to get them something in the sale. It makes [the price tag] more palatable.”

“She had everything you look for,” Toscano said. “First, she’s by Chapter Seven and you can’t do much better. She’s dual eligible, which makes her very appealing because not only does she have the New York, but she also has Kentucky. Kentucky is so lucrative next year because there’s so many opportunities to make money. She’s perfect size – I like a medium-sized horse. She’s got that and she’s got a little bit of pedigree, too. She checked all the boxes.”

Sandwiched in the figures and among the trotting yearlings was Hip 337, an American Ideal colt named Twin B Nation. He lured the third-highest price of the sale with a $300,000 figure from Determination and Luc Blais.

“We buy a pacer every year,” said Blais, whose stable is stocked largely with trotting prospects. “We don’t buy lots. They race okay, but they don’t hit. The money is good, too, in the pacers if you get the right one. We like pacers, too.

“First thing is that the individual was a super nice horse. Looked like a million bucks. They do a really good job at Twinbrook. When I saw him at the farm and when I saw him back here again… we liked him a lot. I like the temperament – he’s a very laid-back horse, controlled and I like that. He reminds me of Forbidden [Trade], [a] really cool horse and dark like him.”

“We’re already past [last year’s figures]. It’s great, just wonderful and it seems like all the consignors are happy,” said Dale Welk, president and director of operations for the Standardbred Horse Sales Company. “The buyers are happy, even though they are spending more money. They are getting what they want – some incredible individuals and we hope it carries on. That’s just incredible how the sale continued. I had a lot of the buyers that bought today say, ‘There’s still plenty of money here’ and there was. They proved that right up until the end.

“Counting the mixed, we might not be far off $40 million tomorrow because of the amount we’ve got to sell. Last year, our total (for both the yearling and mixed sales) was $43 million. That’s going to be pretty good to be close to $40 million with just the yearlings.”

Welk joined Hanover staff in prepping the consignment for the heavy turnover to come the next few days in Harrisburg. Along with the yearlings slated to sell tomorrow, the consignments will teardown, move and fill vacant stalls for the mixed sale, which begins Thursday (Nov. 11).

“We do a lot of changeover tonight and tomorrow night will be a big night for changeover,” Welk said. “We move a lot of curtains and stuff tomorrow night. We’ll move probably 400 horses tomorrow while the sale is on. We’ve got a great crew that does that.

“I keep touting it, but there’s been so much interest in the mixed sale, especially Thursday with the mares. We’re looking forward to Thursday.

“The office staff, everyone, all year working hard to put the right kind of sale together. It’s extremely gratifying and I can’t thank our consignors, the owners that sell with us, and the bidders and buyers, enough. That makes the whole thing. We do the background work, but we need them in the front.”