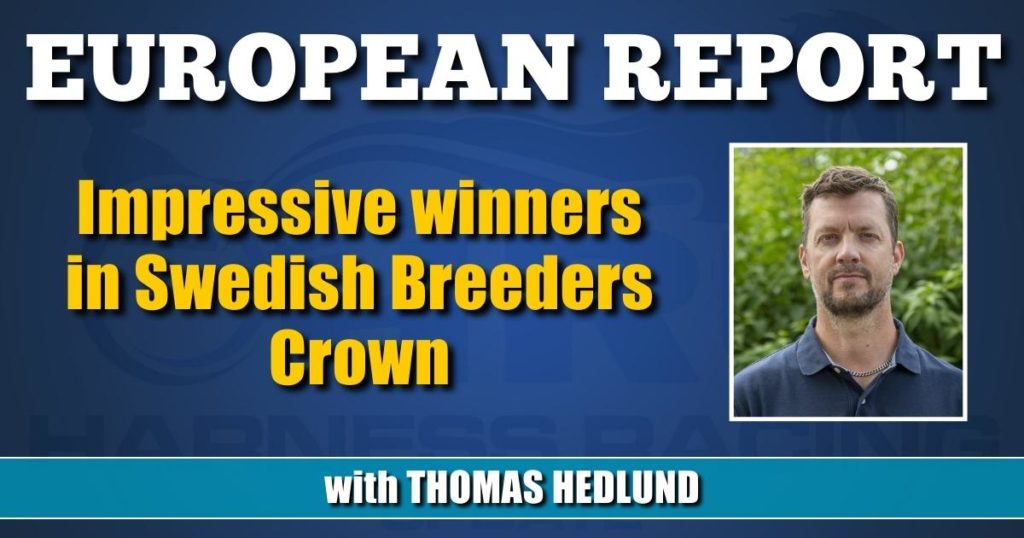 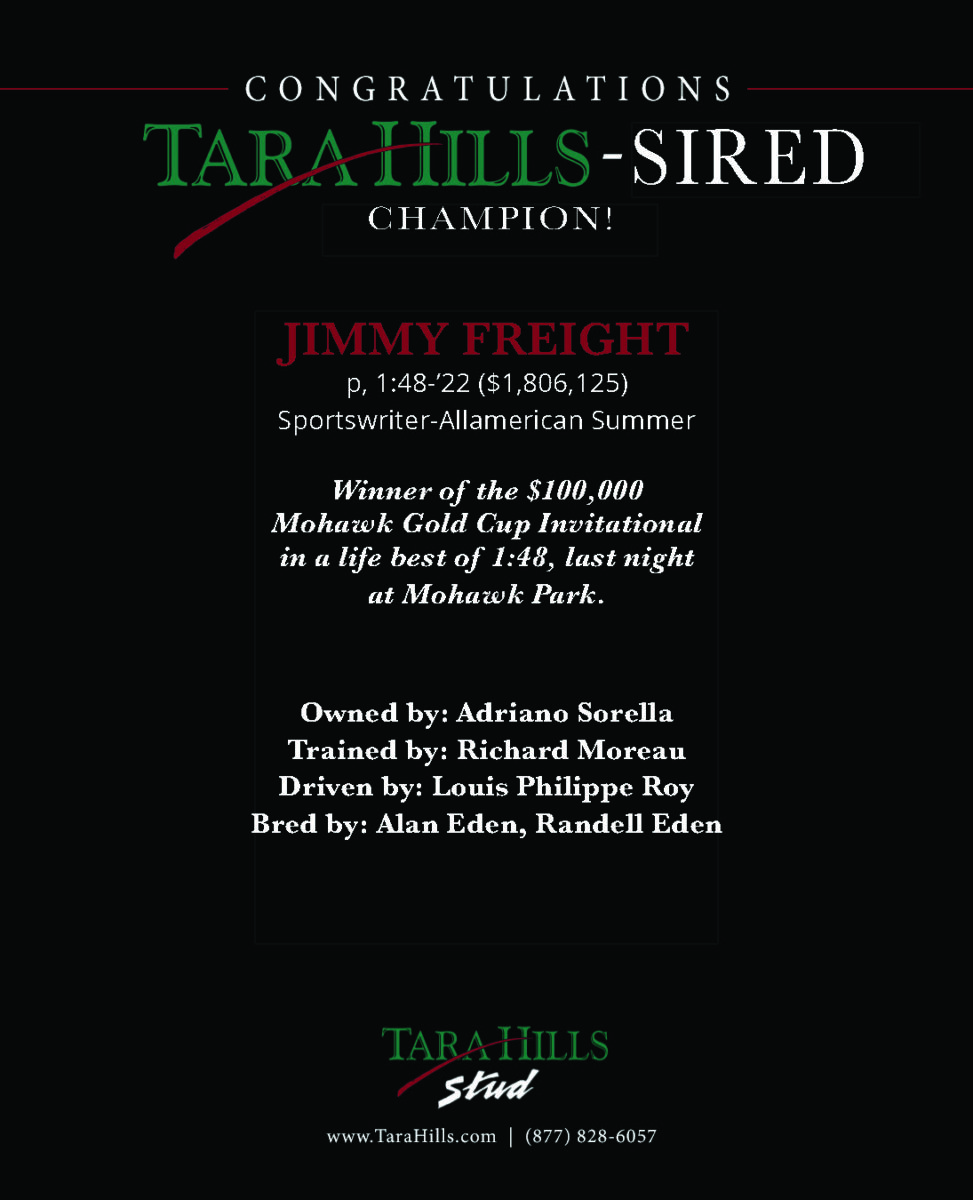 Four $373,000 Breeders Crown finals were on the menu in Eskilstuna, Sweden on Sunday (Nov. 7) afternoon and the race card was indeed rich in content with most of the best 3- and 4-year-olds in Sweden gathered around the same track.

Unfortunately, the Swedish fall seriously entered the region on Sunday morning and rain and quite low temperatures subdued the atmosphere a bit around the oval. Nonetheless, the four Breeders Crown divisions were all exciting and one American-bred trotter hit the wire as winner. SRF Stable owned Fifty Cent Piece (Muscle Hill) has been fortunate in every stakes race she’s been in this year. Victories in Drottningpokalen and Stosprintern preceded the triumph in Breeders Crown for 4-year-old mares which ended up being pretty safe. Robert Bergh came to the lead after a quarter of a mile, after a hard battle against Hall Of Am, who made a break just before Fifty Cent Piece reached the front position. Heavy favorite Honey Mearas went off stride after 100 meters and when two of the worst opponents were out of the race, Fifty Cent Piece proved to be best, even if runner up Sayonara had advantage over the leader at the top of the stretch. The mile rate 1:57.2 was the moderate winning time for Fifty Cent Piece over 1.3 miles. Hall Of Am did a very strong race after her break in the first turn and came back as third at the wire.

ALN Önas Prince (Per Nordström) inning the the 2021 Swedish Breeders Crown on Sunday in Eskilstuna.

Fifty Cent Piece’s ”purse” in the final was $186,500 since, in this case, she was bred in a country other than Sweden.

Derby winner Calgary Games didn’t try the Breeders Crown since he’s working at Menhammar Stuteri as a stud and when elimination winner San Moteur was scratched from the final for 4-year-old colts and geldings, Per Nordström-trained Önas Prince (Chocolatier) had to bear the burden as first choice. Önas Prince left quickly for the lead and Nordström was allowed to pass the half mile (approximately) in 1:01.2.

Örjan Kihlström (Mister Hercules) understood that it would be more or less impossible to reach the leader when the pace was set so low, so he left second over for a first over trip when a kilometer remained. And then the great battle began. Önas Prince and Mister Hercules left the rest of the gang with 20-30 meters at the back stretch and the serious move by Kihlström costed a little bit too much for Mister Hercules, who couldn’t challenge the brave leader over the home stretch.

Önas Prince is definitely a factor when the best 4-year-old trotter will be named at the Horse Of The Year awards in February. Some fans consider Calgary Games to be the obvious choice in that category, but if we look back at this entire season, Önas Prince has dominated in a big way by winning Kungapokalen, Sprintermästaren and Breeders Crown, while he finished second to Calgary Games in the Derby. The mystique that surrounds Calgary Games since he’s undefeated, probably weighs heavier when the journalists will decide who’s the best 4-year-old trotter in Sweden 2021.

Both divisions for 3-year-olds were claimed by Daniel Redén and owner Brixton Medical AB (Stall Zet). Kriteriet winner Francesco Zet was the big favorite in the Breeders Crown for 3-year-old colts and geldings and Kihlström hit the lead after a quarter of a mile. Francesco Zet (Father Patrick) has developed a lot during the season and the colt seemed eager to run all the way this time. When he won $882,000 Kriteriet at Solvalla earlier this season, Francesco Zet acted immature and in Sunday’s race he seemed to be a grown up horse who knew what the job is about. Kihlström had everything under control and the Father Patrick son hit the wire an outstanding winner in a mile rate of 1:56.2.

Runner up Indy Rock finished very strongly ahead of Dozen Of Oysters.

It was more of a surprise when Redén trained Glamorous Rain (Muscle Hill) claimed the Breeders Crown for 3-year-old fillies. From position third over, driver Kihlström had to leave three wide with a lap to go when attacks were made from behind and Glamorous Rain did the tough job outside of horses in two turns while the pace was really high. First over trotter Lara Boko kept the pace high and leader Red Lady Express could never rest one second in front. Lara Boko got advantage of the race in the last turn and Glamorous Rain should have been out of both moral and power with the tough three wide trip, but Kihlström managed to persuade his trotter over the home stretch. Glamorous Rain kept her nose first at the wire and a very brave Lara Boko had to find herself as runner up ahead of Imhatra Am. Glamorous Rain also became the fastest winner of Breeders Crown 2021. The mile rate for her was 1:56.1.

“It was an exciting day and we had our shots in advance. My horses all performed very well in the eliminations and I had great belief in both Francesco Zet and Honey Mearas,” Redén said. “Unfortunately for Honey Mearas, she didn’t like the track today after all this rain, but overall, the surface has been great, considering the weather and everything. Francesco Zet is a very good horse, which he proved already in Kriteriet and today he won with a lot of power to use in the end. We’ve had an unbelievable year, again and our horses have claimed several big races during the season. I’m just thrilled.”

Redén claimed his eighth Breeders Crown trophy when Glamorous Rain won on Sunday. It is a great achievement for a trainer who opened his stable in 2017.