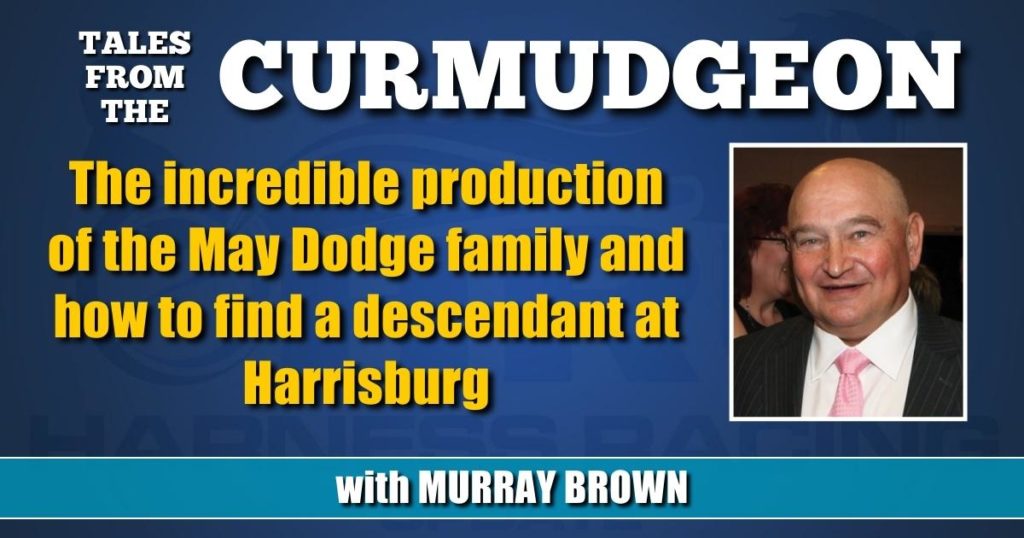 The year was 1957. I was a junior in high school. I had started going to the races at Blue Bonnets and Richelieu Park, the two racetracks situated at almost opposite ends of the island of Montreal — Blue Bonnets situated in the west and Richelieu as far east as one could possibly travel without drowning. Coincidental to my attendance, I had also began what was to become a life-long interest in the pursuit of standardbred pedigrees.

One of my first, quite possibly my very first favorite horse, was a colt by the name of Senator Spangler.

Georges Giguere, the race secretary at the Montreal tracks had initiated the Canadian Juvenile Circuit, a series of 2-year-old stakes races designed to get owners and trainers to purchase yearlings and develop them into stars to race in the events at the Montreal tracks. The star of the first series of those races was Senator Spangler, a colt by the unraced Billy Direct stallion Direct Spangler and out of a Hal Dale mare by the name of Romola Hal.

As has likely been the case throughout my career in harness racing, even then, I thought I knew a whole lot more about pedigrees than I actually did. Two of the most magic names when it came to pacers were Billy Direct and Hal Dale, later to be surpassed by their two most prolific sons Tar Heel and Adios. But that is a tale for another time.

Senator Spangler was a good 2-year-old, a better 3-year-old and developed into a marginal free-for-aller. He actually turned out to become a world champion — one of the variety of those mostly unimportant statistics that clutter our record books. He and the outstanding mare Chief Maid jointly held the world record for a dead heat of 2.00.4h on a half-mile track.

My interest in Senator Spangler led to further interest in Romola Hal and her offspring and eventually her maternal family. Romola Hal had been owned by Leo McNamara and his Two Gaits Farm in Carmel, IN. After the death of Mr. McNamara, Lawrence Sheppard purchased Romola Hal to be bred to Tar Heel his great son of Billy Direct at Hanover Shoe Farms. The first foal to result from that mating was a filly named, appropriately enough, Romola Hanover.

Romola, from that point forward as was the mode back then was bred exclusively to Tar Heel. Her next Tar Heel filly was named Ritzy Hanover. Ritzy took a two year old record of 2.00 and earned in excess of $100,000, both of which were quite rare back then. As the breeding gods would dictate Ritzy was the far better of the sisters on the racetrack, but didn’t come close to sister Romola Hanover in the broodmare ranks. Romola Hanover never saw a sales ring. She was one of the fillies then annually retained by Hanover to be put into training and then become members of that famed nursery’s broodmare band.

She was trained by John Simpson Sr. I recall Mr. Simpson telling me that for a small stretch of ground, she might have been the very fastest horse that he ever sat behind. She possessed a high degree of speed. However, as with many Tar Heel fillies of that era, she wasn’t possessed of the greatest manners and disposition. She didn’t kick, at least not to the degree that many Tar Heels would, but she was possessed of the habit of falling down on the racetrack. She was a decent race filly. However, it was in the broodmare ranks where she was destined to excel, becoming in this person’s far from unprejudiced opinion and relative to her era, the greatest producing broodmare in the history of our sport. Included in her foals were the champions Romeo Hanover, Romulus Hanover and Romalie Hanover; plus several other good stakes performers who were a whole lot better than the proverbial “empty stall”.

All of this is a precursor to a discussion of what this scribe and almost certainly some others believe to be the greatest pacing family by which our sport has been endowed.

From the standpoint of modern day importance, it begins with the mare May Dodge, a foal of 1924. May Dodge had four foals, three daughters, all of them destined to play a role in the production of more champions of our breed than probably any other mare ever.

Looking at the production of May Dodge, one would be severely challenged to predict that a mare of such minimal achievement in the broodmare ranks herself and average lineage would become arguably the greatest female influence of the pacing breed. Of her four foals, only one, the mare Ripples even won a race, that being in taking a pacing record of 2.15 on a half mile track.

It was that same Ripples who was the first to show the greatness that was to be later found in the family’s production. She is known as the grandam of the two great Gene Abbe sired free-for-all brothers, Irvin Paul and Stephan Smith. For one of the multitude of unanswered questions involved in the breeding of horses, the production of greatness through Ripples began and ended with Irvin Paul and Stephan Smith.

May Dodge’s oldest daughter Romola and the youngest Nora Adele were to have the greatest influence as it still does today on wherever pacers are bred and compete.

Here are some amazing statistics regarding this family:

The family has produced:

Numerous stallions who have had, are having, or will have an effect on the breed include:

Some other horses, including, but not limited to those who for the most part were not of an age where the purses would necessarily have included then among those named above:

All of the above is a prequel to my original motivation in writing this column. Last week I asked myself the question: “If I were just beginning in the breeding business. How would I go about it? What am I looking for?

In order of preferences, they would be: 1. Family, 2. Family and 3. Family. Then, of course, I would be looking for the norms most look for and at including but not necessarily entirely, a good individual, current production and a sire line that is in vogue and in demand.

But to this scribe, family stands above all other prerequisites.

In determining which family is of prime importance, I moved to the one that in my perhaps less than stellar opinion is the greatest in the pacing end of the sport. It’s the one variously known as that of May Dodge, Klata Thorne or Miss Duvall, depending on how far back in the lineage one chooses to wander. I picked May Dodge, because it was from her that all of these horses of recent interest descend.

I then decided to go through this week’s Harrisburg catalog and come up with all the female descendants of this great line. I look upon the exploration of this list as being a good beginning to starting that fictitious broodmare band. I see myself as being in a no lose situation. If none of them turn out to be good producers, I’ll be dead and gone anyway so who cares. If some do, as I am fairly certain will occur, I might be remembered for my sagacity.

My goal relates to breeding only. I’ll quote my good friend Myron Bell, “When I look to buy a filly, in my mind, she isn’t going to race. Of course, it would be great if she did and raced well. But I am looking beyond that. I want to develop a great broodmare and improve the breed.” Unfortunately for both Bell and myself, we are of an age where it might be impractical for that to be primarily the only focus. Nevertheless, it’s always good to be optimistic. It’s with that in mind that I’ve put together this list of those fillies from that family, among others of course, that I’d be sure to be looking at in this week’s Harrisburg Sale if my goal was to establish a premier pacing broodmare band.

For those who might be interested, there were 36 female yearlings from this family sold in Kentucky as opposed to the 22 being offered at Harrisburg.

Yearling filly descendants of May Dodge being offered at Harrisburg:

Comparing the Lexington and Harrisburg sires

On an unrelated note, I took a deep dive into the sire represented in the opening sessions of this year’s Lexington and Harrisburg sales.

My anticipation, as this is written, is to be at the Harrisburg sale today (Nov. 7) for the Sunday show day prior to the sale and to attend the first day of the sale on Monday, Nov. 8.

I will probably be mostly hanging out at the Preferred Equine Marketing consignment under the care of my adopted son Simon.

To all of you selling, I wish you the greatest success in your endeavors. May Harrisburg return to the great place it was for selling and buying horses prior to the onslaught of COVID-19.

To the buyers of which I will probably be a part of one or two, I wish nothing but the best of success in racing in 2022 and the years to come.

Most of all, I wish you all health, happiness and prosperity.