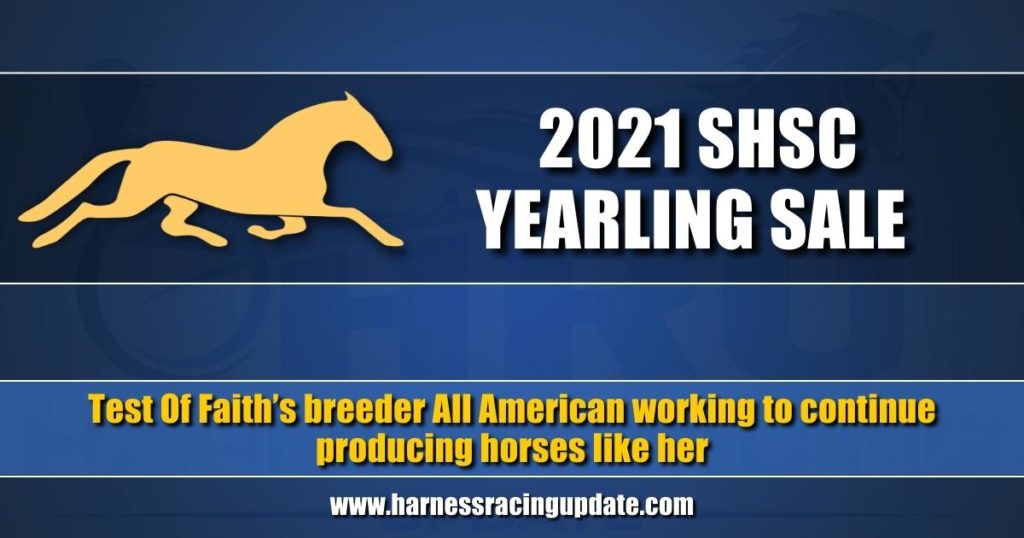 “It’s pretty exciting. Not only is she a Breeders Crown winner, but I think a leading candidate for Horse of the Year and that’s what we’re trying to do. We’re trying to sell and raise horses like Test Of Faith,” Tribbett said.

To do that, Tribbett said he will look to the SHSC mixed sale to try to find a few new broodmares.

“We always try… I think you have to keep improving or you’re going to fall behind. It’s something that’s a priority of ours. There are a lot of venues to buy horses now, but I still think that the Harrisburg mixed sale is the best… it just gives you so much selection and hopefully you can find something. We’ll certainly be shopping once we get done selling.”

Just as the timing of the Harrisburg sale allows yearling buyers to have a sense of how well they have done racing horses in 2021 now that the major stakes are over, Tribbett believes the same holds true with the mixed sale.

“The breeders know where they are and what they have to spend once that section starts,” he said.

From All American’s Harrisburg 23-yearling strong consignment, Tribbett believes the headliner is Hip 97 All Day Party.

“This is a brother to Stag Party and Hen Party. He’s by Captaintreacherous and he is kind of the whole package, not just from pedigree, but he’s a really good mover in the field. He’s typical of what that mare has thrown – medium sized, but really good movers. He’s probably the headliner for what we’re selling there the first day,” Tribbett said.

Tribbett said Hip 367 Sweet Home could be a value pick from All American’s consignment.

“She’s out of Music Row, so we’ve bred that whole family. She’s a good size, like all the Huntsvilles. She’s a really good mover on the video. It’s a mare where everything has hit, but she’s just waiting for that superstar. I think this is the one,” Tribbett said.