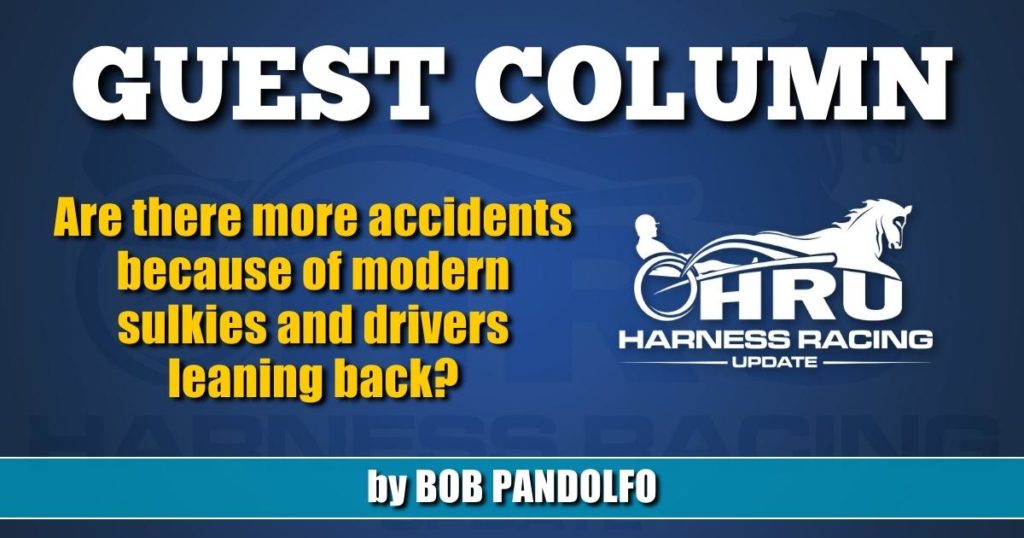 Are there more accidents because of modern sulkies and drivers leaning back?

As most of you know, I’ve written extensively about how the faster modern-day sulkies hurt the racing. The sulkies are longer, off-set (crooked), and the drivers sit much farther behind the horse, with long hand-holds. And, the drivers lean far back in the bike. The longer distance between horses is roughly a half length. When you extrapolate that out, it means that the horses racing off the pace in the back of field have much more ground to make up. In a 10-horse field, for instance, the trailer is about 30 feet farther behind than it would have been in one of the old bikes. By now, everyone who understands racing knows that this is the main reason why the outside posts win half as often as they used to, and why you don’t have that many exciting come-from-behind finishes from horses racing third or fourth over. Heck, at most tracks, second over isn’t even a good trip now. The modern sulky also causes clogged and stalled outside flows, which greatly aids leavers and makes the racing much less exciting while contributing to low payoffs.

But that’s not what I feared. When the drivers first started sitting far behind the horse and leaning all the way back, some veteran horsemen, and many racing fans, contacted me with questions like, “Is this safe? Can the drivers react quickly enough when a horse breaks?”

I don’t have all of the dates and information on all of the accidents this year, but here are some:

Accidents that occur during races are brutally tough for the drivers and horses, and very upsetting to racing fans. And I think the sport is trending in a bad direction, because accidents seem to be more common in recent years.

I often hear things said like, “these bikes track so well” or “the horses are better gaited now.” Well, almost all of the on track accidents occurred after a horse broke stride, and there seem to be plenty of breakers. I remember attending the Breeders Crown at Mohegan Sun in 2013, and on that Saturday night, 19 horses broke stride on the same card. That’s an awful lot.

It seems to me, when the horses break stride, the driving style of laying flat down backwards in the sulky might be delaying the reaction time of the drivers. All it takes is an extra split second – it can make the different between taking a hold of your horse, steering clear of trouble, or piling into the breaker. I also wonder if these off-centered and longer bikes, with longer hand holds, make it a bit more difficult to steer sharply. I remember some years ago when the first off-centered bikes came out, Hall of Fame driver John Campbell said that he felt they could be dangerous because they were harder to steer around trouble.

In any case, this is something that the industry should be examining. Are there more accidents? If so, why, and what can be done about it? There is nothing worse for the sport than breakers and accidents. Nothing.

I know that people may think I’m piling on because I don’t like the modern day bikes. But, hey, the modern day sulkies do make the races less entertaining, and racing is a form of entertainment. And that does chase away customers and fans. And, now, it appears that the bikes may be dangerous.