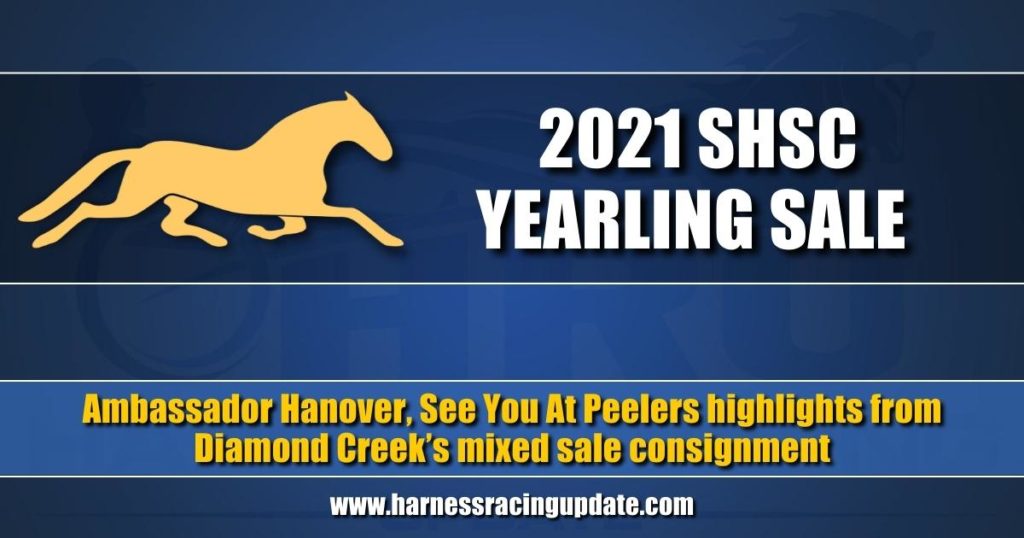 As a Kentucky-based breeder, Diamond Creek sells its own stock at the Lexington Selected Yearling Sale, but that doesn’t mean the farm won’t have some strong yearling and mixed sale offerings on behalf of clients from the agent side of its business.

“He recently won his Breeders Crown elimination, was third in the Hambletonian and has a big career still ahead of him. We don’t think it’s very often that a horse like him, that’s racing so well is available,” said Shaun Laungani, Diamond Creek’s vice-president and director of bloodstock services. “He had some bad luck clipping wheels in the Breeders Crown final, but it’s a horse that was really good early in the season, plateaued a little bit, then has come back strong in the Breeders Crown. He’s a very valuable colt. He’s got stallion potential still, so he’s a racing and stallion prospect.”

“She’s a legendary mare and everyone knows her story,” Laungani said. “She’s still got plenty career ahead of her. She should be the expensive type, similar to how we sold Somewhereovrarainbow last year successfully (for $240,000).

“A couple of others… we’ve got an exciting Sweet Lou colt named Boston (Hip 1356). He was a multiple stakes winner in Kentucky this year. He’s a 1:50.3 2-year-old. He’s got probably a huge year ahead of him next year. The only reason we’re selling a horse like him is because he’s a gelding and we’re more in the stallion game with the colts. He should be an expensive horse.

“I think you’re going to see a really strong stallion market. We’re selling a Downbytheseaside share and I think it could really light up the board. To me, the mixed sale is as good as it’s been in a few years, probably since the White Birch dispersal. Just with what’s already in there, then with the supplement – there’s the Lindy Farms broodmare reduction, with all those mares in foal to Walner. I mean, if you are a breeder looking to stock the cupboards with some of your yearling money there’s a nice selection to choose from. I personally cannot wait to get out there and shop the mixed sale.”

As for yearlings, Laungani mentioned Hip 70 Whenipullup, “just because it’s a first foal out of a nice family. This is out of Hold It Hanover and that’s the family of Hayden Hanover, who is actually a stallion over in Sweden now… She moves well, she’s naturally gaited, and I think she’ll be a solid filly for somebody.

“The other one is Hip 235 Give Him A Rope. It’s not as rich of a female family, but he is a Chapter Seven colt. He is just an athlete. He’s really great in the paddock.”