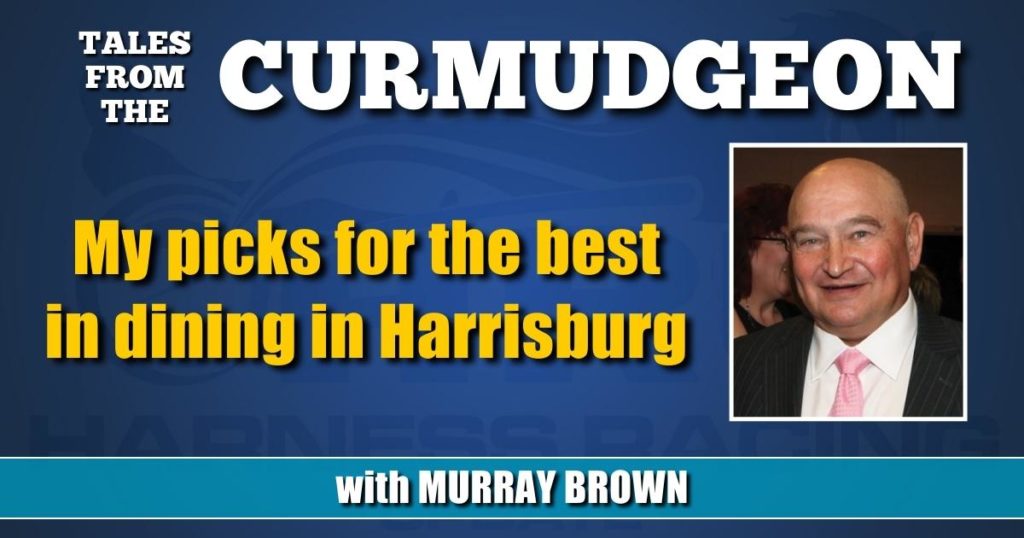 My picks for the best in dining in Harrisburg

I was asked to put together a list of recommended dining spots for people to visit while they were attending the sale in Harrisburg, PA this coming week.

I’m guessing that I’ve lived in various hotels in Harrisburg for a minimum of a year when all the days are added up, probably closer to two years in my 52 plus years at Hanover Shoe Farms and my 37 years as general manager of Standardbred Horse Sale Company and for a few years prior to those gigs.

Alas, my very favorite restaurant — which is also a favorite of many people privileged to have eaten there in its heyday — is no more. In fact, it’s been gone 40 years now.

The Maverick, which was less than a three minute drive from the historic Pennsylvania State Farm Show Complex, opened in 1961 and was consumed by a fire in 1981. It was THE gathering place for horsemen from all over the world to eat, drink and otherwise spend time while in Harrisburg. Not only was it a great gathering place, it was also a great restaurant.

The food, drink and service were exceptional. It was the only place in Harrisburg where you could get Bananas Foster or a Caesar salad prepped tableside — by the owner, no less.

The bar was always hopping and for a relatively unsophisticated, mid-sized city like Harrisburg, it had a superb wine list.

On the Friday prior to the sale it became a tradition for myself, Randy Manges, Ralph Lemmon, sometimes Jim Simpson, Dale Welk and whomever we could round up to have lunch there. Randy and I would invariably order chicken livers, a dish they prepared better than any place I’ve been to before or since. Oh the joy we exhibited when everyone else at the table asked us how we could order such a disgusting dish.

Since the last time I was in Harrisburg, another of my favorite places has also gone to restaurant Valhalla. Char’s Tracy Mansion, a beautiful building set right on the Susquehanna river has closed because of the retirement of the owner Char Masgaro. It was a gorgeous place with food that came very close to the beauty of its space. Char also had another superb restaurant in Harrisburg that preceded the mansion. It was a tiny place overlooking the south side of the Susquehanna called Char’s Bella Mundo.

Other good restaurants that have come and gone since the Maverick were the Gazebo Room, Scott’s, Harry’s Tavern, Lombardo’s and my late friend Skip Lewis’ all-time favorite Santanna’s. Skip would spend a whole year looking forward to being able eat at Santanna’s a few times while he was in Harrisburg for the sale.

However, it’s not the departed restaurants I was asked to write about, rather the ones that are still there that I would recommend.

Harrisburg is neither a wasteland of good food, nor is it comparable to a city like Lexington, which has a great number of good restaurants and many cuisines from which to choose.

In addition to those individually owned and run places that I’ve listed, it would be unusual not to find a major chain ranging from the omnipresent McDonalds to the somewhat upper scale Bonefish Grill or Texas Roadhouse, within the city or its close environs.

There are several good diners for breakfast, as well as the chains Cracker Barrel and my favorite Waffle House. The latter are somewhat rare to find in a Northeastern City.

It’s important to note that many restaurants in Harrisburg and the area are not open for Sunday dinner. Of those listed below, only Gabriella, The Glass Lounge and the Altland House welcome guests for dining on Sunday evening.

Mangia Qui — It’s a very small restaurant on North St, less than a five minute walk from the State Capital and about a 10-minute walk from the downtown Hilton Hotel, where many of the sale’s attendees stay. It is owned by its chef, the charming Qui Qui Musarra. The restaurant is described as an Italian Bistro. Qui Qui is a firm believer in freshness and quality ingredients. Everything on the menu is good, most of it outstanding. I have eaten at steakhouses throughout the world. You may find one or two that present a steak close to as well as Mangi Qui’s prime “Il Toscano”. There is not a single one in my experience that is better. Not only is it great, it’s also huge. Bravo to the person who can finish one. There is not an item on the often changing menu with which I could possibly find fault. You will probably see some familiar faces here. Horsepeople are there throughout the week. Lella and Bryan Montgomery like this place so much that you are likely to encounter them here several times. Bryan has told me that during the course of the year, he has been known to make the occasional detour just to be able to dine here.

Tavern On The Hill — It’s technically not in Harrisburg itself. It is located just across the Susquehanna river in the small town of Enola Pa. Once again, everything that you order here will be at the very least good and when it comes to a few dishes, I would say great. They probably have the finest wine list of any restaurant in the area. It contains a huge assortment of great wines from all over the world. The prices of the wines, although not those of the food, can border on the exorbitant. The food isn’t cheap, but for its quality, it is reasonably priced. As for the wine, I suppose that it costs a lot to maintain such a quality inventory. The food is excellent. Once again, I’ve never had anything here that was not of the highest quality. Their lamb chops, rack of lamb, steaks, crab cakes and the crabmeat cocktail are especially good, as is the rice pudding, if you are going to indulge in dessert. The complimentary bread they serve is good, but do yourself a favor and order some of their garlic bread for a few bucks more. It is difficult to find better. If you are going here for the first time, it can be somewhat difficult to find, so make sure that your GPS is working properly.

Progress Grill — If there is one restaurant that perhaps has taken the place of the departed Maverick as being the most beloved horseman’s hangout, it would have to be the Progress Grill. There is nothing fancy about the place. The food is excellent. The menu is huge. It is usually crowded, but generally not hard to get a table. Among the dishes I can recommend are the crab cakes, the prime rib, the steaks are good as are whatever fish dishes on offer, the rice pudding for dessert is to die for. Every time I think of the Progress Grill, I visualize my late dear friend Mr. Ed, Ed Mullinax diving into his favorite dish, liver and onions with a big scoop of mashed potatoes on the side.

1700 Degrees Steakhouse — It’s located in the downtown Hilton Hotel where a good many horsepeople stay. In a previous incarnation, the restaurant had another name that escapes my fading memory. When Bill Perretti was alive and in business he’d take over the restaurant every evening during the week and hold court there. If you were tough enough to stand up to his abuse, you were guaranteed a good evening of great wine, good food and some craziness. It has been some years since I’ve been there. I cannot imagine the food being as anything but good to excellent.

Rubicon — A sister restaurant to Mangia Qui and located virtually next door. The focus of the food here is more related to French than the Italian, but the offerings are quite similar to that of its sibling, including that incredible “Il Toscano” steak. If you can’t get into Mangia Qui, then eat here. You won’t be losing anything in terms of quality.

The Glass Lounge — A place that has been in Harrisburg for as long as I can remember and that’s a long, long time. Unless my memory is failing me it was a favorite of Ronnie Waples. It’s an old school tavern type of place that specializes in steaks and seafood and more specifically crab cakes. There’s nothing fancy about the place. The food and the service are very good.

Gabriella — An old school, red sauce Italian place that serves all the favorites. I especially enjoy the lasagna. Everything here is good.

If you have the time, there are two restaurants of note which I would highly recommend that are less than an hour’s drive from the state Capital.

The Circular Restaurant is in the historic Hotel Hershey in Chocolate town, Hershey, PA. It’s a beautiful place in a great and beautiful historical setting.

Another place of note is the historic Altland House (founded in 1763 and run continuously since then, the original deed was signed by William Penn) in the tiny borough of Abbottstown, PA (just north of Hanover, PA). It is now owned and run by the fourth generation of the Hough family. If you’ve ever wondered where those famous crab cakes are from that are served to visitors to the Hanover Fairgrounds inspecting the Hanover yearlings for the last 60 consecutive years — this is the place.