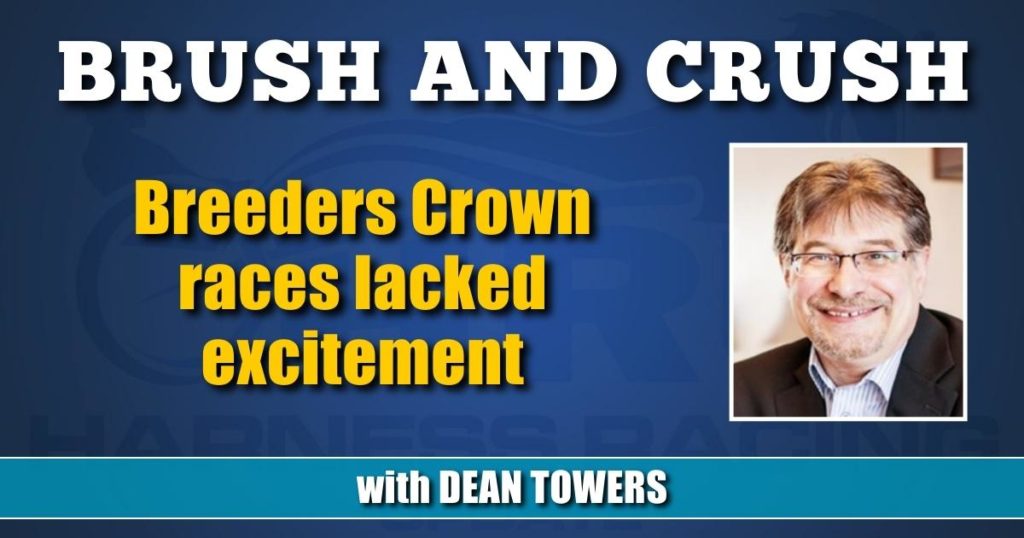 For fans and bettors, driver strategy and the modern half-in-half-out racing style put the kibosh on what’s supposed to be harness racing’s biggest day

At about 2 o’clock on Saturday afternoon my email and text messages suddenly exploded.

“As someone who bet the six I loved it. But objectively, half the drivers should be ashamed.”

“It’s the Breeders Crown and the drivers are acting like it’s the 4th race at Chester on a Tuesday.”

The Mare Trot had just concluded where Ake Svanstedt and Felicityshagwell left for the lead, got a :57.2 half and a :58.1 middle, and sprinted home leaving nine others in her wake.

Ake committed this tactical theft because Yannick Gingras and Atlanta didn’t want a lead, David Miller on a race favorite chose not to leave, and the entire field was half-in-half-out waiting for Atlanta to move.

It’s easy to excuse the race as being an outlier, blaming my text message blow-up as typical sour grapes. And just like me and possibly you at work, drivers make mistakes.

Unfortunately, though, this race style was a feature, not a bug.

In the Mare Pace, Joey Putnam got his horse on the move early, but he must’ve not gotten the memo. He and others had to wait (by my count) about 15 seconds for Tim Tetrick to move to get the flow going on the race favorite. Tim, it appeared, was waiting on Dexter Dunn to move out of the three hole, who never ended up moving.

“The clogging of the outer tier continues to be a problem,” noted long-time professional handicapper Les Stark to me via email.

“It’s a product of less competitive racing, and drivers who refuse to be told how they can drive. I was very disappointed with the lack of excitement in the Breeders Crown races.”

Another handicapper who loves this game (sometimes I think more than life itself) simply noted to me, “our game has become boring.”

This weekend, the Breeders’ Cup will be raced at Del Mar, and at this very moment jockeys such as Ryan Moore and Joel Rosario, trainers like Dale Romans and Doug O’Neill are huddling up, discussing race strategy. They’re trying to find ways to pin a favorite to the wood, race ride who they’re trying to beat; they’re ready to do everything possible to win a race. The result of this will be handles north of $100 million, with memorable races being shared on social media and rewatched on YouTube for years to come.

It’s silly to profess harness racing can do the same with its main event, but I don’t think anyone would disagree the lack of excitement is a huge issue on our biggest days. The Meadowlands, for example, has been working on implementing new rules (or enforcing existing ones) to encourage more action at the behest of bettors, fans and handle.

“While the answers aren’t easy, not addressing the problem will ensure the demise of harness racing,” said Stark.

After Saturday, I think there’s a lot of people who agree with him.