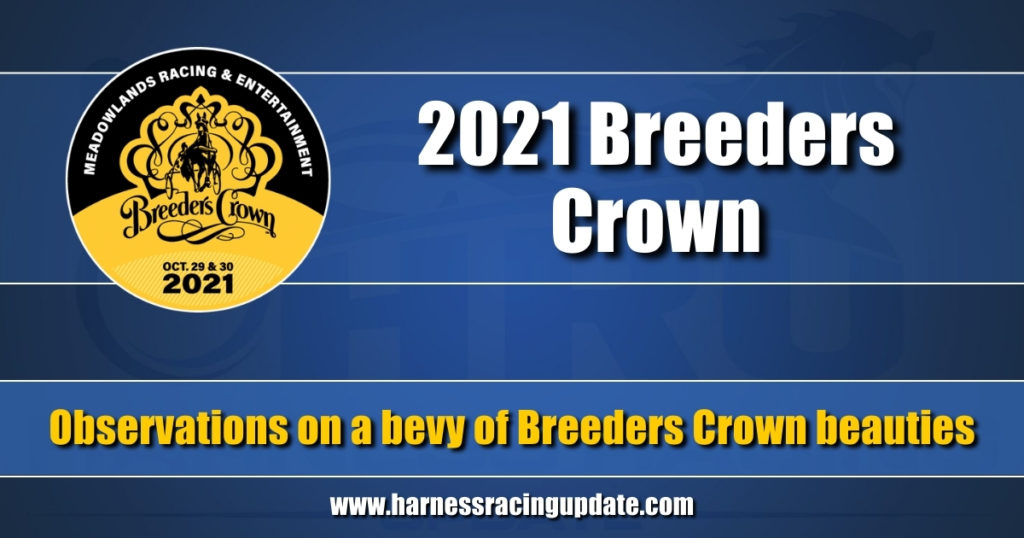 Observations on a bevy of Breeders Crown beauties

Summing up the Saturday Championship card at The Meadowlands.

Observations for Saturday’s (Oct. 30) Breeders Crown card at The Meadowlands — which was blessed, for once of late, to receive delightful fall weather —focus first on the sophomore divisions.

We have been fortunate to have an extraordinarily-deep 3-year-old pacing fillies in 2021.

Scarlett Hanover, Blue Diamond Eyes, and Grace Hill are just a little off “great,” but certainly very good. I think, given some of the circumstances under which she raced and kept going forward, Fire Start Hanover, the 2020 champion, rates just a little higher, as a great.

And then there is Test Of Faith. She is a classic, an all-timer, one of the best in her division’s history. Her consistency, her adaptability, and he sheer refusal to give into any temptation to not win, are amazing. She is an irresistible force attitudinally. No disrespect to the other fillies mentioned here – any of the four of them might have been a champion in another year – but this year they have had Test Of Faith to deal with. She’s earned respect.

These fillies’ trotting counterparts looked like they were going to present a great stretch drama: Altar, so fast last week, going along on the lead, with season’s leader and Oaks winner Bella Bellini ready to come off the helmet in front of her.

Then, whoosh! – Altar goes offstride, and the big question never gets asked, as Bella Bellini is an easy winner and all but clinches the divisional title. And she wasn’t even favored in her Crown championship.

In fact, Perfect Sting was not the favorite in the North America Cup, as recently as less than two months ago, while Bella Bellini’s last time as not being the public choice was in a Pennsylvania Sire Stake on June 6.

Perfect Sting was again a slight favorite against archrival Charlie May in the glamour division Crown, and finally got the “signature victory” that trainer Joe Holloway had been long looking for. Charlie May had gotten the lead with relative ease, and at 1:23.4 to the three-quarters, we’re sure many thought that the Ohio horse wouldn’t be caught. But Perfect Sting went back to his own talent and the blinding speed in his pedigree, putting up a :25.4 last quarter to catch the gallant Charlie May.

Supplemental late bloomer Jujubee most certainly did not have an easy time controlling the pace in the Hambletonian-group trot, being used in a :26.2 first quarter, but he dug down deep when it looked like the whole world was coming at him in the stretch and got the job done – and in stakes record time of 1:51.2 on a day which no one would claim was conducive to record-setting.

Jujubee’s fellow supplemental Ecurie D DK looks like “den ægte vare” after repeating his Lexington storm away with another dynamic victory in the Open Trot. He showed the ability to keep his head when he had to get out in very tight quarters, and then he just strode away with those powerful, reaching strides that the best Europeans seem to produce effortlessly. Stablemate Back Of The Neck was up for second to make a 1-2 Svanstedt stable finish.

And how about Åke, after never having won a Breeders Crown before, capturing a pair on Saturday, with Felicityshagwell S marching straight to the lead and holding off none other than Atlanta in a big victory. You have to sort of feel sorry for poor Atlanta, never having a Crown to her credit, although she does have everything else.

Rocknificent came up magnificent for Linda Toscano and connections for the second straight week in winning her Mare Pace Crown, and in 1:49, only a tick off the stake record. Lyons Sentinel again had to pay an overland price to get into contention, but she just couldn’t make it despite trying hard. (We’ll talk about year-end implications in a little bit.)

We started this review with Brett Pelling, and we’ll end it with his horse Allywag Hanover coming up a little shy in his bid to solidify his campaign for big-level year-end honors when Ocean Rock came out of the pocket to  wear him down late. All credit to the Nobles and connections — what a rich vein of form that horse is in right now! (And Cattlewash did get up for second – that’s a horse, like the winner, this writer has been underestimating a little bit).

So, how does this change the big picture?

#1, #3, and #5 in the Hambletonian Society / Breeders Crown poll – Lyons Sentinel, Allywag Hanover, and Atlanta – did not win over the weekend.

My guess would be that those voting might go to Test Of Faith in the next poll, but these voters don’t change their minds too quickly. Lyons Sentinel had 21 first-place votes and Test Of Faith 5 before the weekend – will one race cause a huge turnaround? Allywag Hanover (5), Atlanta (2), and the absent-yet-returning Venerable (2) also had first-place votes – are they all likely to be given the bum rush and drop several rungs on the ladder?

Aside from the Denmark trotter, who has been impressive but against not the strongest division, I think that Niki Hill and Jujubee, in that order, will get the biggest boosts. Charlie May had 71 points, Perfect Sting 64 – those totals will reverse, and Perfect Sting may open up a bit of a margin.

But here’s something you have to keep in mind: there’s still a lot of racing to be done.

Kindergarten Finals and Final Fours for the 2-year-olds. Matrons for the 2- and 3-year-olds (plus the Progress for colts, which could affect TVG invitation decisions). Indiana stakes for 3-year-olds. The TVG Championships, with the intriguing possibilities of some 3-year-olds accepting bids, or an Atlanta, taking a shot against the boys.

Don’t mark any ballots in your head yet. Stay open to what racing is still to come. “It all comes down to the Breeders Crown” to some extent, but with a mixed bags of results such as we had, plus given the messy conditions Friday, there is still a lot of evidence to be heard before the balloting.

Dexter Dunn and Scott Zeron both won a Breeders Crown on each card. David Miller and Åke Svanstedt won twice on Saturday (the first two ever for Svanstedt, as previously noted).

According to our numbers, David Miller, Tim Tetrick, Scott Zeron, Andrew McCarthy, Åke Svanstedt, and Yannick Gingras each drove the winners of over $500,000 in the Championships. (Gingras won five eliminations, but he had no victories this weekend, although he did post three seconds). And if that sounds like chump change in the fast lane, remember that drivers get 5 per cent commission, so each of these fellows pocketed $25,000 or more over the weekend.

The only trainer to win two Crowns? Yes, it was the fellow that hadn’t won a Crown before Saturday, Mr. Svanstedt. The barn posted a 9 2-2-1 output, with that 1-2 finish in the Open Trot, and earned over $900,000 on the weekend by our numbers. Ron Burke (no wins, but four seconds), Nifty Norman, and Brett Pelling also saw their horses bankroll half a million.

The winning post positions in the 12 Crowns were pretty spread out – posts three and six had two wins, and only post nine (and yeah, 11 if you want to get technical about it) went winless. Favorites won five of the 12 races, 41 per cent, about average.

The varieties of winning styles were very interesting: only a couple of outright pace-setters, a couple of early movers, some pocket-sitters, and five horses two-wide before the half: a first-over, three second-overs, and a third-over. Some horses were the beneficiaries of great trips; some did not have the trips they want work out at all, whether through weather, competitive tactics, or just better opposition.

I took the 12 divisions and rated them, right now, in three categories:

“I have my ideas on Champion nearly complete, or narrowed down to a couple” and “I’m really not sure what way I’ll go.”

Five of the first, five of the second, two of the third. (Try the exercise yourself.)

Which means that more than half of the categories do NOT contain sure things, in my mind. Which means I’m going to be paying very close attention to those November races we mentioned above.

Which reminds me to get rid of as much bias as I can – male vs. female, trotter vs. pacer, and such divisions. I generally am not too sentimental, don’t really “like” certain horses and follow them blindly, so I don’t fall into that trap.

I hope that you will follow the rich racing season that is left, and enjoy its clashes and successes.