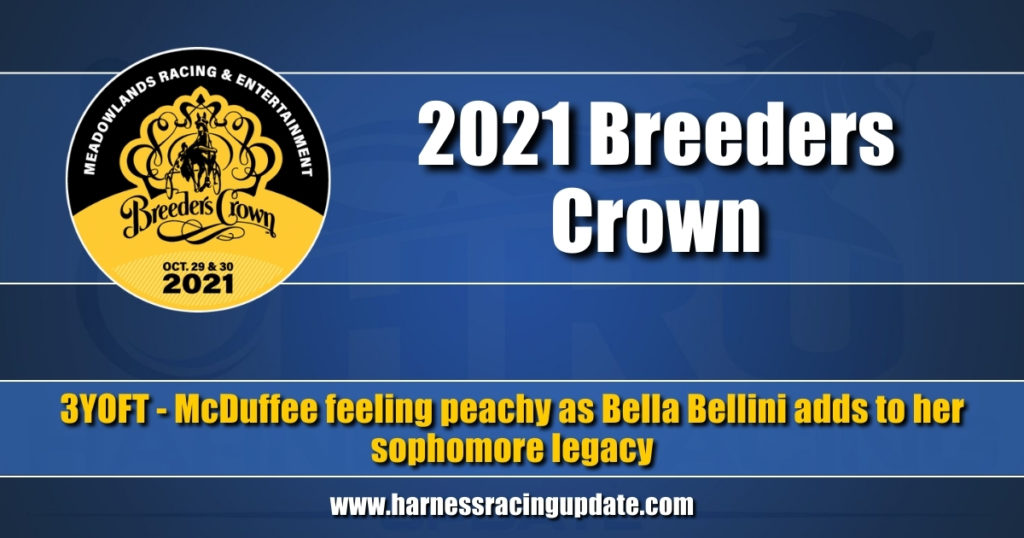 Not many associated with Bella Bellini thought she’d ever look like a million bucks.

After enduring a rookie campaign that yielded a lone second from seven starts, the hopes were that Bella Bellini could reverse her fortunes and have a strong sophomore season.

On Saturday afternoon at The Meadowlands, the 3-year-old daughter of Bar Hopping put a few more exclamation points on what has been a simply outstanding campaign for owner/breeder David McDuffee and trainer Nifty Norman.

Squaring off against nine rivals in the $650,000 Breeders Crown 3-year-old filly trot, Bella Bellini, who arrived at the final off a strong effort in her elimination last week (a 1 ¼-length score over Herculisa in 1:52.4), went off as the second choice over slight favorite Altar.

With Dexter Dunn in the sulky, Bella Bellini blasted off the gate and took the lead, but was soon overtaken by Altar, who proceeded to take the field through an opening quarter timed in :28-flat.

The top betting choices continued their cat-and-mouse game through a half-mile :56.4 and by three-quarters, reached in 1:25.4, the duo had begun to separate themselves from the pack.

Altar, bracing for the oncoming challenge of Bella Bellini, dug in for the anticipated late-race duel, but then broke stride, giving her rival clear sailing to the wire.

In the end, last call went to Bella Bellini, something her connections have become quite accustomed to in 2021.

With the victory, the bay filly went over the $1 million mark in career earnings and delivered Norman a treasured seventh Breeders Crown coronation.

“How about that, huh?” quipped McDufee. “Believe me, I hoped that she’d be good, but I never expected her to be great. She’s great.”

It was the 10th win from 17 starts this year for Bella Bellini, who also has six runner-up placings to go with her victories.

Those triumphs include a memorable performance in the Hambletonian Oaks on Aug. 7.

Sent off as the 2-5 choice, Bella Bellini posted a 2 ½-length triumph in 1.52.1, and in doing so, put herself in some rather unique company.

Only two other fillies – Worldly Woman (1992) and Jalopy (2005) – over the past 40 years have won the Hambletonian Oaks after having gone winless at age 2.

To put her head-turning turnaround into further perspective, Bella Bellini began her career with a fifth and sixth, respectively, at Harrah’s Philadelphia last August.

Her first win would come in her eighth career start, the first of her 3-year-old season.

And she did it in style.

On April 20 at Pocono Downs, Bella Bellini, with Dunn at the controls, converted a four-length lead at the stretch call into a 15 ¼-length laugher in a time of 1:54.

She hasn’t looked back much since then.

For those who know her best, the transformation from raw rookie to trotting titan has been quite spectacular.

“You know what, she’s a beautifully-gaited horse,” praised McDuffee. “If you start with that. She’s grown into a great-looking filly.”

A filly whose future appears to be in the breeding shed.

“I’m going to breed her next year,” said McDuffee. “She’s going to go to the Matron in about 10 days and that’ll probably be it for her.”

Regardless of where she finds herself in 2022, Bella Bellini could be in for a nice hardware haul after all that she’s accomplished this year.

McDuffee is hopeful a division title comes to fruition.

“I think she’s right in there and she capped it off pretty good today,” he said with a laugh. “I think so. It would be hard not to, wouldn’t it?”

As for the horse’s name, McDuffee can thank his wife Mary Ellen for that.

Odds are the couple will likely raise a glass, or perhaps two, to celebrate their trotting star.

“Well, a Bellini is a drink. It’s a peach drink, like Peach Schnapps and I always thought it was pretty to look at. And it went with Bella, so she was Bella Bellini. I am a Bellini fan.”

He’s not the only one.

“I love those Bellinis,” Mary Ellen said. “I love them even more now that Bella goes with them.”

Just like her namesake, the once win-shy filly is now as smooth as ever, a refreshing change from those early miscues and poor results.

And perhaps, there will be another trotting star for McDuffee to showcase down the road.

Coming from a family that includes the great Pizza Dolce, the 14-time winning daughter of Conway Hall, Bella Bellini could very well bring cheers to her elated owner-breeder.

“’Pizza’ was the first one and she was kind of a special horse. She had unbelievably quick speed and I just believed in her. I wish I had another one coming. Maybe I will out of this one,” McDuffee said.