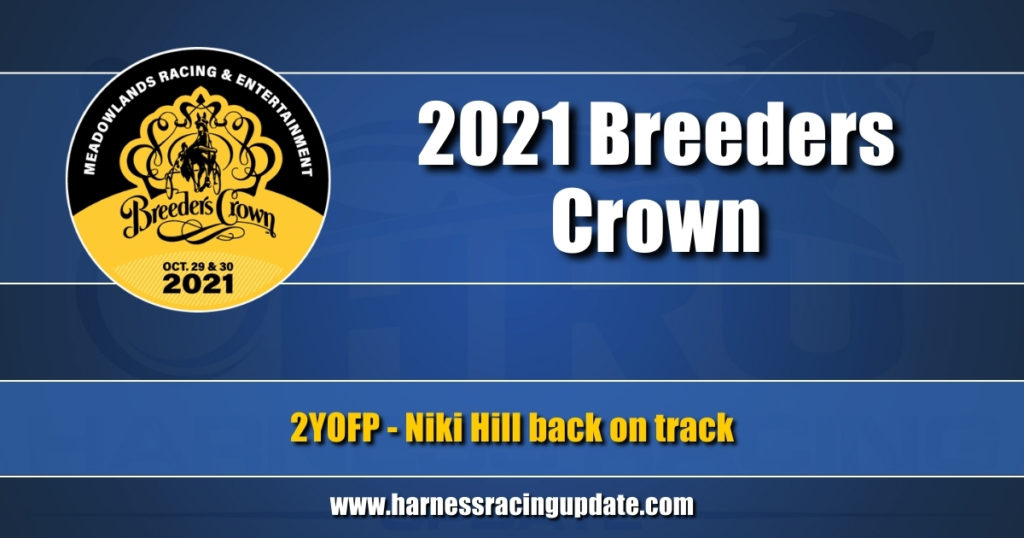 Niki Hill back on track

Once driver Dexter Dunn guided Niki Hill to the top, it was lights out as she scored a 4 ¾-length victory in 1:51.

Dunn wasn’t surprised she went that fast on the off track.

“I knew the conditions would suit her more than other fillies because she’s so strong,” said Dunn. “She’s a big powerful girl and I was full of confidence with her. I was nearly halfway down the back straight trying to stop her [after the race]. She’s got a massive set of lungs on her.”

Chris Ryder trains the daughter of Always B Miki—Road Bet for owner Tom Hill, who resides in the coastal town of Morecambe in Lancashire, England.

Even though Niki Hill’s race went off at 2:15 a.m. in England, according to Ryder, Hill was watching and cheering.

Niki Hill went into last week’s Crown elims a perfect six-for-six but ended up finishing second to Queen Of Success, beaten half a length.

Ryder’s son Patrick has spent a lot of time with Niki Hill both at the farm and on the road as the person who drives her to the track for the detention barn.

“The last couple of days we’ve had her on the walker just to make sure she was getting plenty of movement [because it was too rainy to have her out in a paddock],” said Patrick Ryder. “I’ve even been out on the walker with her for 20 or 30 minutes a couple of mornings just to be sure she’s safe on it. The walker’s on and I’m holding a lead shank and I’m just walking with her.

“Melissa Erzena is her groom and she takes fantastic care of her. She also took amazing care of our wonderful filly, Party Girl Hill, last year.”

Just as with Party Girl Hill, Niki Hill is owned solely by Hill.

“A lot of owners in the States are in it for 20 per cent or 25 percent, but every horse that races with my name on it with the exception of one, which I own most of, is owned by Tom Hill, not owned by five different people in a syndicate,” Hill said. “It gives you the flexibility if you want to change a trainer or you want to go to a certain race, it’s your horse, you say what happens to it. When you paddle your own canoe, you’re the captain of your own ship. You make the decisions.”

One decision that Hill regrets making was in 2018 when he took a horse away from trainer Chris Ryder to give it to another trainer.

Hill remembers running into Ryder that winter and how Ryder was just as nice and friendly as he was when he was training for him.

“If somebody takes a horse off you and gives it to somebody else, they sort of get a sour taste, but Chris was exactly the same man as he was before and that’s what I really liked, and it made me feel like a heel,” said Hill.

Hill said he spoke with Ryder and took total responsibility. He also said Ryder had done nothing wrong and that he’d make it up to him.

“And as soon as I got a chance to give him what I knew was a nice filly, I can’t say I knew it’d be as good as it is because I would be lying to you. But I knew it was a nice filly and we gave it to him trying to make good on what we had done wrong. And it worked out for him and for me,” said Hill.

And now Hill and Ryder have Niki Hill and what looks to be an award-winning season and hopefully a good 3-year-old campaign.