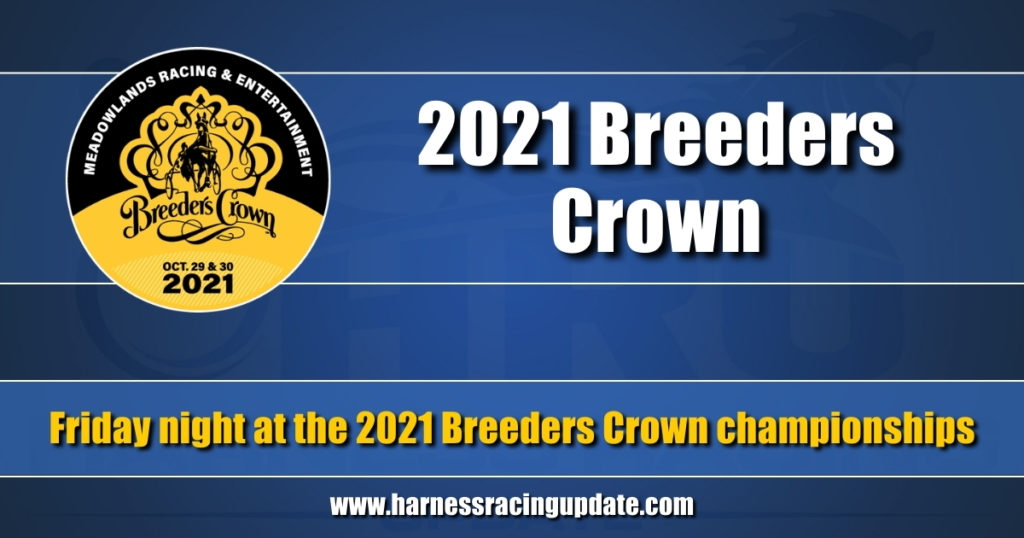 Weather, again, was as dominant a story as the horses on the track.

Once again, dank conditions had about as much to do with Breeders Crown racing as did the horses. We’re about due for a turn of luck there.

The strong backstretch headwind was the major factor (don’t believe us: Yannick Gingras said it on a pre-races interview). After the third race, before the Crowns, the judges put a “+1” on a fast track because of the wind factor (they did the same thing at Philly early in the card this afternoon). Wind is, as always important, and you can tell by the fractions just which way the wind was blowing, and who had bad luck to be on the move against the elements.

Yannick said that before the races; when the rain came, it came hard, and seemed to be almost as much a factor. It started to rain before the fifth, and was a downpour for the sixth, the first Crown, for which the surface was retro-rated to “sloppy +2”; all four Crown races carried that designation. (Gabe Prewitt looked like a clothes mannequin upon whom somebody through a new piece of protection for a few races there).

Clearly, the front horses were at a disadvantage – last week nine of the 19 elim winners were on the lead at the half, but seven of them were not there just off the first turn. This week, moving into the wind, over a tiring surface, moving to the lead later on the backstretch wasn’t so great, even if as a favorite a horse had to be in a winning spot. The two that lasted on the lead made the moves earlier on the backstretch.

The equine star of the show was Niki Hill. If you thought after last year you might not see another filly like Party Girl Hill, it’s a Hilluva thing that you only had to wait one year before possibly seeing the next one.

Moving early on a night that didn’t help that tactic, then drawing away effortlessly and coming within three-fifths of a second of the stakes record over the “sloppy +2” surface – it was a most impressive performance, especially with Dexter Dunn not moving a muscle in the lane.

Chris Ryder (who was instrumental in bringing Dunn over here, and got a special mention) wasn’t sure whether Niki Hill would go on to the Kindergarten Final and the Final Four – he said he’d have to talk to owner Tom Hill, who was up and watching the race at 2:45 a.m. in England. Whatever (and whenever) the decision, it will be made by a knowledgeable owner and trainer about a terrific juvenile.

And then there was almost a dead-heat for win in the 2-year-old colt pace, as there was last year, but Monte Miki got the nod over Gulf Shores in a 1:53.2 mile with a last quarter of :27.1. (Technically there was a dead-heat, but for sixth this year).

What a life-changing horse for trainer Mark Evers, whom I used to watch racing at Lebanon when I was working in Ohio in the 1980s. Before this year, his best seasonal earnings were $331,586 in 2005; Monte Miki, with wins in the Metro and now the Crown, himself has earned $685,276 in seven lifetime starts.

(Longshot personal observation: Early Action will win in the month of November if Joe Holloway goes on with him. Follow this horse through a replay in the last half.)

Lindy Farms’ Domenico Cecere was interviewed before a race, and when his interview was finished, he said, “Thank you, and good luck to everybody tonight.” That was a refreshing, thoughtful way to end an interview.

Tim Tetrick also rates a mention in the quote category. Gabe Prewitt interviewed him after Rebuff came from third-over to win the colt trot, and said, “For those not as lucky as we are to be in this winner’s circle right now, what would you say about the weather?”, to which Tetrick said, without missing a beat, “It’s always a bright and sunny day when you win a Breeders Crown.” He’s won 22 of them now, and he’s not 40 until next month; he also went over $10 million for the year with this win.

(And for those who say that all holes should be closed when possible, watch Tetrick’s drive with winner Rebuff here.)

Yannick Gingras, who won five of the 19 eliminations last week, didn’t get a Crown Friday night, but he had two seconds and a third. The four Crowns went to four different drivers; Dexter Dunn had 1-2-4-5 finishes for the most cash among drivers, $459,600 (again, all these figures are not official as calculated quickly under the pressure of deadline). No trainer won more than one Crown on Friday, either.

Those who say that people don’t bet more on good horses, check this: the first five races, in better weather, averaged a handle of $214,000. Then there were the four Crown races for 2-year-olds, in adverse conditions, and they averaged $349,000 – up 63 per cent. Granted, the Crown races all had full fields, but still.

MIDNIGHT — 100 per cent chance of rain

And then, of course, is today’s eight-course smörgåsbord:

3PF: Will Test Of Faith deliver another big victory and get into serious consideration for Horse of the Year? Does the gallant Fire Start Hanover have a chance to repeat as divisional champion with a 10-9 post draw in the Crown races? Will Grace Hill, right there all the time but kind of quietly, come up with a roaring performance to put her squarely in the spotlight?

OTM: Can Atlanta finally get the only major win she hasn’t accumulated, a Breeders Crown – and would a win there put her in the Trotter of the Year talk? Can When Dovescry get a big win here – and how would that win impact November 20?

3PC: Here’s the BIG Perfect Sting – Charlie May showdown. How will the weather, and the trips, work out? Seems like a win by either would go a long way towards the championship (but don’t forget Nov. 20). Or can Southwind Gendry, who can be his own worst enemy, finally put it all together?

3TF: Would Bella Bellini, without question the seasonal leader, cement a title with a Crown victory? But how scary was Altar’s win last week in 1:51.2 – 3/5 of a second faster than the fastest-ever final for this group?

3TC: Jujubee came up a little shy in his elimination – can he improve on that race and take the Crown, and likely the division, in this race? (A mention of Captain Corey here.) Too many other, realistic possibilities to name – depends on what you feel their maximum is, and what Jujubee can show today.

OPM: Lyons Sentinel is #1 in the polls entering this race. Does a victory here make her a tough one to topple for Pacer and Horse of the Year? Ironic that Rocknificent of 2021 vs. Lyons Sentinel is the Lyons Sentinel of 2020 vs. Party Girl Hill – a repeat of her Crown elim win would knock down that image.

OTH: What will we see from Ecurie D DK? Is a big win here and in the TVG (he could be invited) enough to make him a divisional winner in a year where the ladies often outshone the boys?

OPH: Will another impressive win FINALLY get Allywag Hanover into the Horse of the Year conversation that he should have been in for the last two months? Plenty of fast opposition here – maybe no one horse can beat the chalk straight up, but a number of wearing challenges could put somebody in prime position to take advantage. I don’t think so – the Aug. 21 race at Pocono is the race of the year for any horse for me (THREE sub-27 quarters?).