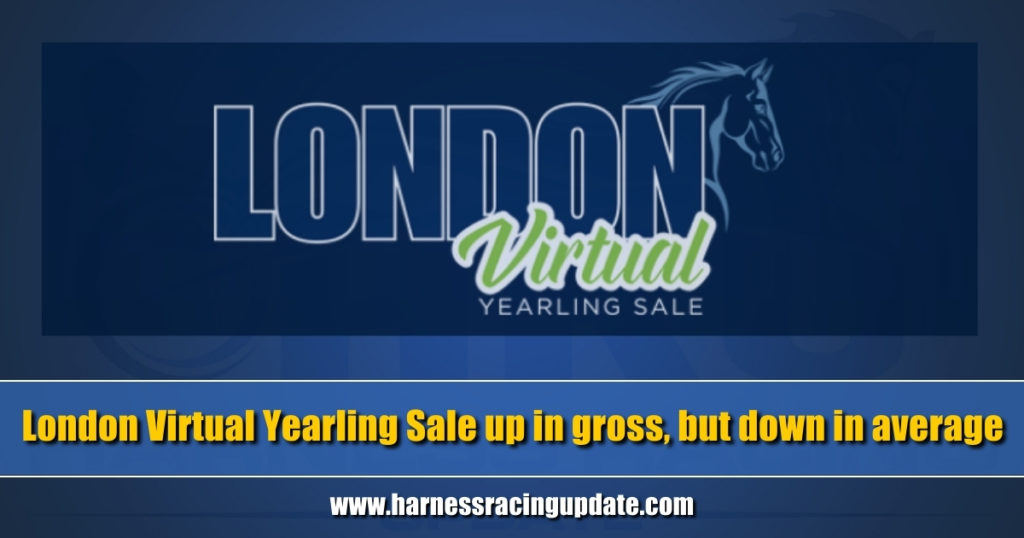 London Virtual Yearling Sale up in gross, but down in average

The second annual London Virtual Yearling Sale, which ran from Saturday, Oct. 16 through Thursday, Oct. 21 on the OnGait.com platform, was up 32 per cent in gross, but down 9 per cent in average compared with the inaugural online-only sale in 2020 when 44 fewer yearlings were sold.

This year’s sale topper was hip 89 Mickey Muscles, a son of Muscle Mass out of Lady Bling sold for $125,000 to George Millar of Stouffville, ON from Dean and Ashley Wilson’s consignment.

The other yearling to reach six figures was hip 48 Stonebridge Agate, a Muscle Mass filly out of Stonebridge Cream sold for $105,000 to Larry Walker of Campbellville, ON from the Stonebridge Farm consignment.

A third Muscle Mass yearling, hip 58 Stonebridge Jasper, sold for $98,000 to Luc Blais of Campbellville, ON. The colt out of Stonebridge Encore was consigned by Stonebridge Farm.

The highest-priced pacer sold was hip 69 Battalion Seelster, a Big Jim colt out of Tarport Bearcat that sold for $96,000 to Steve Heimbecker of Waterloo, ON from the Seelster Farms consignment.

As it was in 2020, the London Virtual Yearling Sale was conducted entirely online because the sale’s traditional home — the Agriplex at The Western Fair District in London, ON — is still being used as a COVID-19 vaccination site by the Middlesex-London Health Unit.

There is no word, yet, whether the 2022 sale will be held online, live or a combination of the two.