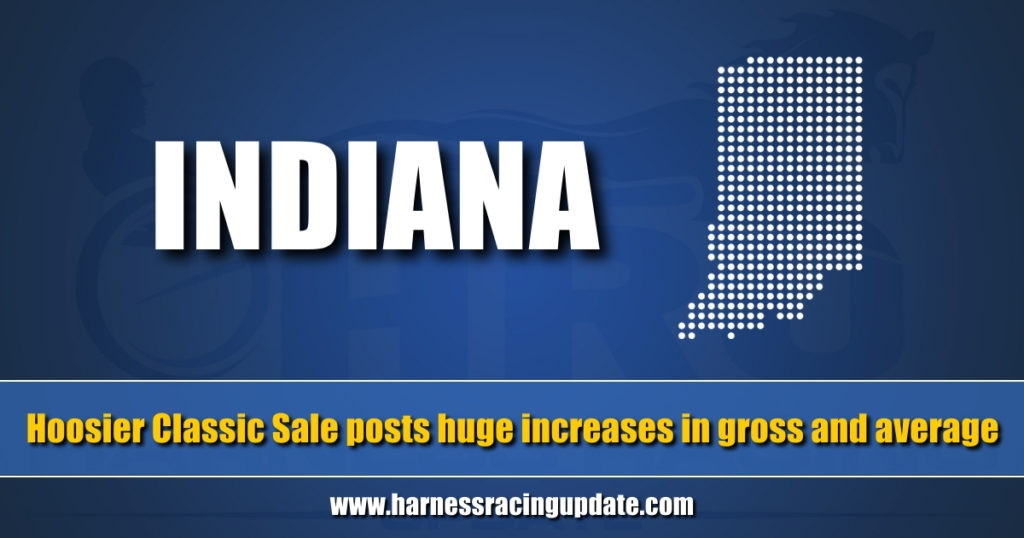 The 2021 Hoosier Classic Yearling Sale followed the trend established this fall at other auctions, posting significant increases over the two-day event. Held at the Indiana State Fairgrounds on Oct. 22 and 23, the select sale offered a catalog of 416 yearlings — 43 more than in 2020 — and produced record numbers in all metrics. A total of 400 yearlings were hammered down for gross sales of $8.576 million, an increase of nearly $1.7 million over the previous year. The sale average of $21,441 signaled a nearly 12 per cent increase compared to 2020, and the gross and average for each of the two sessions surpassed the standards of one year ago.

“We were slow out of the gate but hit the groove that carried us to the end. Anytime you add horses and improve your average it’s a win,” said sale manager Steve Cross. “The company was excited when Carter Duer decided to bring the brother to Captain Corey to the Hoosier Classic. He obviously attracted new interest to our sale. We had a record number of new buyers.”

Last year, JK’s Speed, a colt from the second crop of JK Endofanera, set a record for the highest-priced Indiana-sired yearling sold at public auction when he garnered a $240,000 final bid. That mark was eclipsed in this year’s Oct. 22 session when Bourbon Courage, a You Know You Do half-brother to Hambletonian champion Captain Corey 2, 1:53.3f, 3, 1:51f -’21 ($1,090,333), brought $255,000 to lead the opening session and top the sale. Consigned by Peninsula Farm as Hip 162, the colt is the second foal from Angus Hall mare Luv U All. Doug Overhiser signed the ticket, and the horse will be trained by Erv Miller.

“Buyers are starting to realize what Erv Miller and his group have known for quite some time now. Buyers who are serious about the Indiana program come to the Hoosier Classic,” Cross said. “The Erv Miller group signed for a record 21 yearlings.”

Overhiser picked up another trotter earlier in the session, going to $42,000 on Swan Kenzie, Hip 83, from the Oakwood Farms consignment. The Swan For All filly is a half-sister to Indiana champion May Baby 2, 1:53.2s, 3, 1:52.2s -’20 ($574,695), and the dam has produced five winners from seven foals, with a trifecta of six-figure earners. Other owners buying yearlings that will be developed by Miller included Anthony Lombardi, Rocco Ruffolo and Al Kowalewski. Miller purchased five horses as agent, signing tickets totaling $140,000.

Wilt Standardbreds, based in Savannah, Missouri, brought a power-packed six-horse consignment to the Hoosier Classic, with each of the yearlings selling on the first day. Besides Happy Swan, the consignment featured two more Swan For All babies, Bridge To Triumph ($95,000) and Flashy Swan ($27,000), to go along with You Know You Do colt Whiskey Bender ($45,000), Helpisontheway filly Midnight Dreams ($39,000), and Tellitlikeitis colt David Allan Whoa ($32,000). Wilt Standardbreds finished with an average of $59,667, surpassed only by Peninsula Farms’ mark of $72,800.

“We had a great sale; we were quite happy. That’s the best average we’ve ever had there,” said Randy Wilt. “We’re very happy. What we’re even happier about is that our horses went to some great homes. They ended up in some really good trainer’s hands, where they have a shot at being somebody. We’ve got a very good clientele that come back and look at our horses. If they don’t buy them, they are bidders every year, and that makes a difference.”

Victory Hill Farm led all consignors in gross sales, selling 21 yearlings for $722,500 and averaging $34,405. In the first session alone, the LaGrange, Ind.-based breeder sold 12 babies for $544,000, including four yearlings that each brought at least $70,000, led by Hip 95, Powerful Tell. The Tellitlikeitis colt topped all pacers with an $83,000 final bid, purchased by trainer Brian Brown.

“We had a good average. We had mainly Tellitlikeitis this year. I didn’t have a standout, but I just had nice horses. It was really a good bunch for us this year,” Victory Hill’s Jeff King said. “Our owners have bought good broodmares, and that makes it so much easier to get in foal. If you get a nice looking yearling and you’ve got some pedigree, they’ve sold real well here again at this sale.”

The first crop of Bluegrass Stakes and Breeders Crown elimination winner Check Six was well received by buyers. Ponda Executive, a colt consigned by Pond A Acres, led the group of 35 with a $60,000 price, while filly Bluebird Affection brought $50,000. All told, Check Six yearlings averaged $21,929. Bolstered by the sale topper, first-crop sire You Know You Do ranked second to Swan For All among trotting sires. Represented by 24 yearlings, the son of Muscle Hill grossed $824,500 and averaged $34,354. Fellow first-crop trotting sire Helpisontheway grossed $672,000 from 35 yearlings, signaling a $19,200 average.

Trainer LeWayne Miller was the most active buyer over the two days, signing tickets on nine yearlings totaling $140,500. Wrenn spent the most of any buyer, picking out five babies for $396,000. Tom Pollack spent $338,000 to acquire seven yearlings to be co-owned and trained by Jeff Cullipher. A total of 14 horses were sold via Proxibid to 12 different buyers, bringing $243,500.