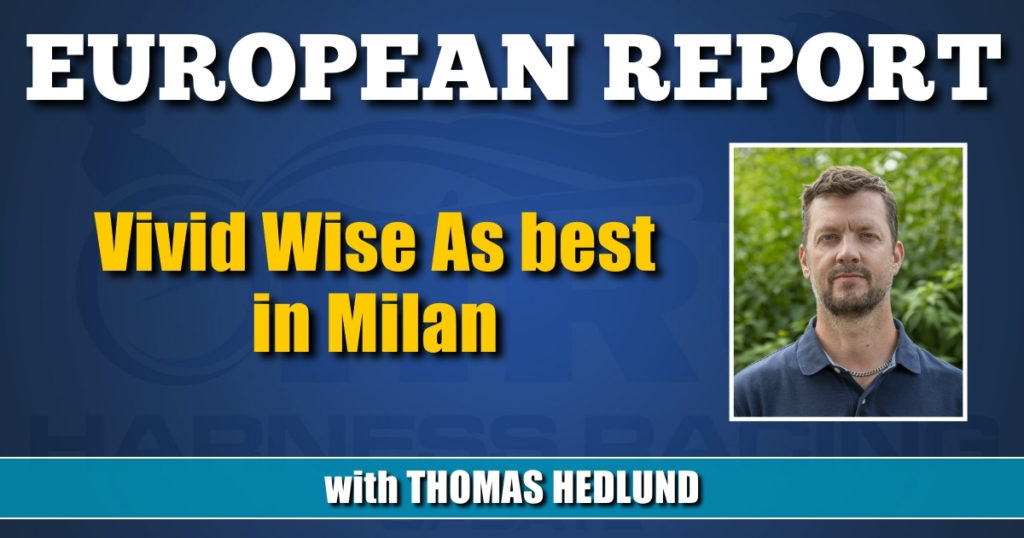 Vivid Wise As best in Milan

Alessandro Gocciadoro-trained Vivid Wise As (Yankee Glide) recorded a very easy wire-to-wire win when the $255,000 Gran Premio Delle Nazioni was held at La Maura in Milan, Italy on Saturday (Oct. 23) afternoon. Gocciadoro sat behind Zaccaria Bar, who started from post 1 and directly when the car accelerated from the field, Gocciadoro noted that stablemate Vivid Wise As, paired with French top driver Matthieu Abrivard, was the quickest horse behind the gate.

Vivid Wise As was allowed to control the field in a very moderate pace and the race was not spectacular. Still, Vivid Wise As is an effective front runner and it’s very hard to pass him when he reaches his favorite spot in the races.

Zaccaria Bar followed as runner up ahead of Rushmore Face and the mile rate over 1.3 miles was 1:58.1.

The $72,000 Oaks for 3-year-old fillies was held in Momarken Norway on Saturday (Oct. 23) afternoon, and the race became a tough battle between Thai Brooklyn (Broadway Hall) and Readyforwine (Ready Cash).

The latter horse came to the lead a quarter of a mile into the race and when a kilometer remained, Thai Brooklyn connected on the leader’s outside. These two horses flew away from the rest of the field and shortly ahead of the wire, Thai Brooklyn disarmed the leader by a neck. Thai Brooklyn won in a mile rate of 1:59.1 over 1.3 miles.

In Denmark, 4-year-old Flower Dust (Love You) claimed the $61,000 Grand Circle 4-year-old Championat for Bent Svendsen. Flower Dust came to the lead with a lap to go in Billund and then the excitement was over. Flower Dust cruised to safe win in mile rate 1:57.2 over 1.2 miles.