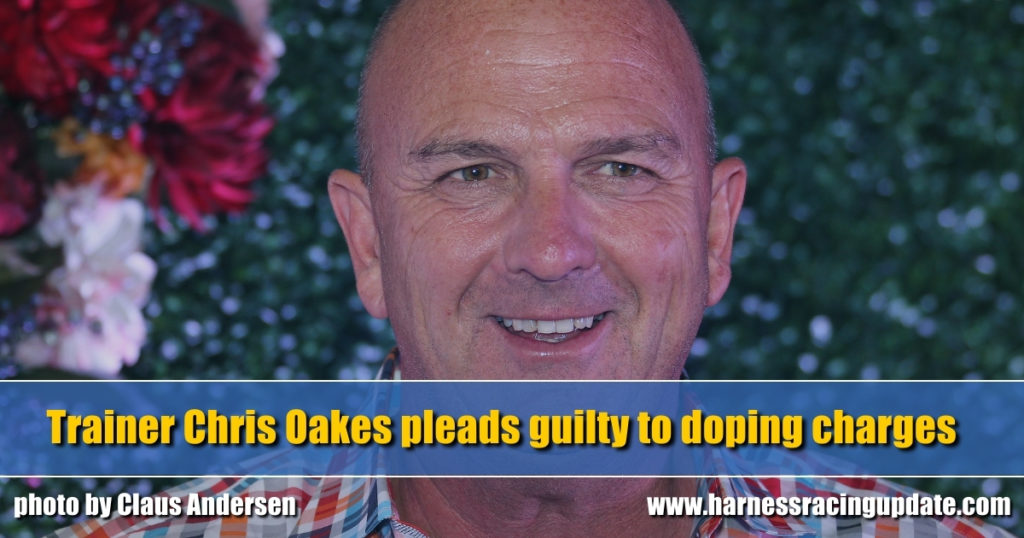 Harness trainer Christopher Oakes, one of 27 individuals indicted in March, 2020 for their role in a widespread doping scheme that included standardbred and thoroughbred horses, changed his plea to guilty on Tuesday. Nine others involved in the case have also pleaded guilty, but Oakes was the first among the handful of harness horsemen caught up in the scandal to enter a guilty plea.

Oakes, 57, pled guilty to one count of misbranding and drug adulteration with intent to defraud or deceive and faces up to three years in prison.

He will be sentenced Feb. 17, 2022. So far, three individuals among those who have pled guilty have been sentenced. Two, Scott Robinson and Scott Mangini, were sentenced to 18 months. A third, Sarah Izhaki, whose case involved extenuating circumstances, was sentenced to time served plus three years of supervised release.

Most of what Oakes was charged with involved his relationship with high-profile thoroughbred trainer Jorge Navarro, who has also pleaded guilty and admitted doping his horses. However, during his hearing Tuesday (Oct. 19) before federal judge Mary Kay Vyskocil, which was conducted via teleconference, Oakes admitted that he used performance-enhancing drugs on horses he trained that raced at Yonkers.

The government intercepted phone calls between Navarro and Oakes in which Oakes promised to provide Navarro with performance-enhancing drugs. Oakes was charged with being a middleman who secured PEDs for Navarro.

“I purchased medications from Dr. Seth Fishman and Dr. Gregory Skelton and his assistant Ross Cohen and administered the medications to the horses in my care to gain an unfair advantage,” he said when asked by Vyskocil what he had done to merit a guilty plea.

Fishman, Skelton and Cohen are drug distributors also among the 27 indicted last year.

Vyskocil returned to the subject later on in the hearing and again pressed Oakes, asking what motivated him to use the PEDs.

“To try to get an advantage and, hopefully, things would do better,” he replied.

Oakes said his doping routine ran from early 2019 through his arrest in March 2020.

The government also charged that Oakes “created and manufactured his own customized misbranded and adulterated PEDs known as an undetectable ‘drench’ that would rapidly increase a racehorse’s performance during a race.”

Oakes told Navarro that if he used the “drench” that there was “zero chance you get caught.”

According to the original indictment, Oakes played a central role in the doping of the Navarro-trained top sprinter XY Jet (Kantharos), who died in January, 2020 under suspicious circumstances.

Oakes allegedly supplied Navarro with PEDs that were given to XY Jet, including a “blocker” PED. On Feb. 13, 2019, the same day XY Jet won an allowance race at Gulfstream, Navarro instructed Oakes to enter the Gulfstream Park backstretch to administer PEDs to the sprinter. “Drive through,” Navarro allegedly told Oakes. “If anything, if they stop you, you are an owner and you come to Navarro’s barn.”

According to the indictment, on March 14, 2019, law enforcement officers found multiple adulterated and misbranded drugs in Oakes’ barn in Pennsylvania, including PEDs supplied by Fishman and Skelton. They also found pre-filled unlabeled syringes.

Oakes owned a handful of thoroughbreds before his arrest and won 14 races. His horses were trained by Navarro.

Oakes was among several harness horsemen banned at the Meadowlands by owner Jeff Gural.