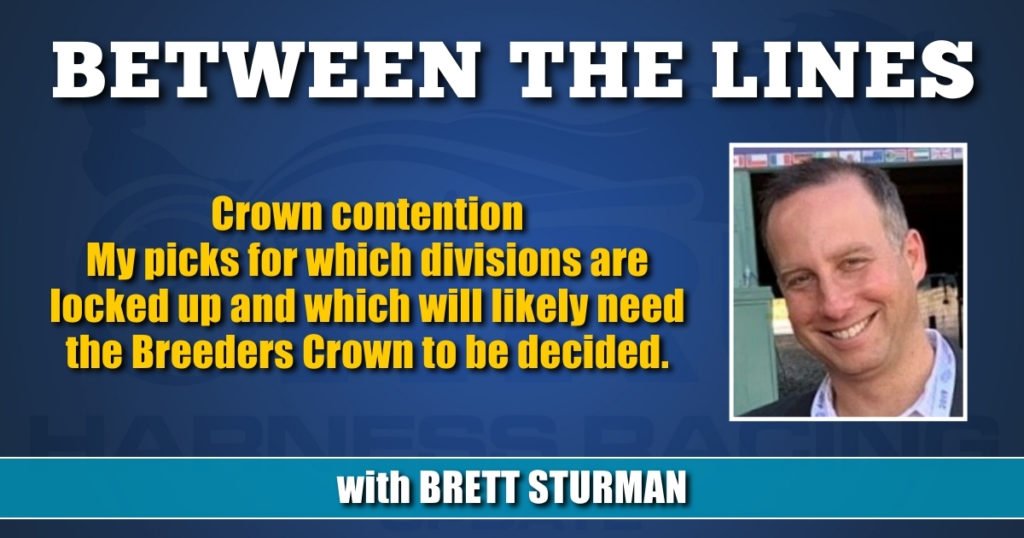 My picks for which divisions are locked up and which will likely need the Breeders Crown to be decided.

As usual, the Breeders Crown will be pivotal in determining divisional honors.

While some divisions are already locked up, most other divisions remain open heading into the Breeders Crown.

The Breeders Crown isn’t necessarily the be-all end-all in determining year-end honors, but for some horses in hotly-contested races, the Breeders Crown will go a very long way in getting them there. Even with the Matron, Fall Final Four, and TVG Finals among other high-profile races still on the calendar, the Breeders Crown is where a lasting impression can be made. Beginning with eliminations in all but one division this weekend and going through next weekend’s 12 division finals, here’s how I see each one.

Beach Glass, Pebble Beach, Early Action (Work left to do): As will be a theme with the 2-year-old races tonight and next Friday, these horses may still see each other again between now and the end of November. But a win from either Beach Glass, Pebble Beach or Early Action would put them in command for the time being. It seems like Pebble Beach was long assumed to be the best one in this division throughout much of the 2-year-old season, but things have tightened. Early Action beat Pebble Beach two back in the Bluegrass in a race where he momentarily gapped from the pocket into the stretch but re-engaged late and reached when it counted. Pebble Beach would get back on top if he can turn the tables, but the wildcard right now is the upstart Beach Glass. Into the Breeders Crown by way of Nova Scotia for the same connections that brought us Somebeachsomewhere, he’s been demolishing weaker at Woodbine Mohawk. Is he really this good? If his current tear continued through the Breeders Crown, even in limited starts you’d be hard pressed to not have him suddenly on top in the division.

Niki Hill, Sea Silk (Work left to do): Niki Hill is like Pebble Beach in that she’s long been (rightfully) assumed to be untouchable in this division. She’s been brilliant in all six of her starts this year, though a couple of others are creeping up. I’m not sure if Sea Silk is good enough to beat her, but the complexion of the division would change if she can. Coming in with a 9-for-9 record for Burke, the Ohio-bred Sea Silk was game in earning that 1:50.3 win in a division of the Bluegrass out; something has to give between her and Niki. Not to be forgotten, fillies like Captain Cowgirl and Gotthegreenlight may not be far off in talent but it’s to be seen how high that a win would catapult them to.

King Of The North (Lock): I went back and forth on his status, but ultimately went to “Lock.” His miscue was unfortunate in the Mohawk Million but the New Jersey Sires Stakes (NJSS) champion has done enough with wins in the Haughton and Wellwood that put him comfortably ahead of anyone else. For him to be overtaken, someone would have to step up and win the Breeders Crown plus either the Matron or Valley Victory; he seems safe.

Venerable (Lock): Fellow NJSS champ is currently the sport’s second-highest rated horse and was able to beat the boys as a filly in the second edition of the Mohawk Million. Is a cinch for the division and will be in contention for even higher honors depending on how the season finishes.

Charlie May, Perfect Sting, Lou’s Pearlman (Work left to do): This division has been back and forth through much of the year with no one emerging as a clear standout for a period of length. These three are close enough that a win from either of them would weigh heavily come the end of the year. Lou’s Pearlman reeled off five in a row recently, including the Little Brown Jug. That, plus a Breeders Crown seems like it might be good enough to get the job done. Similarly, Charlie May has some high profile wins to his credit including when he beat Perfect Sting in the Bluegrass recently and a Crown win could be decisive, regardless as to how voters treat his first-past-the-post Meadowlands Pace. Perfect Sting has an unbelievable amount of second places this year but he’s been right there in all the big dances. He’d have a credible case with a win.

Test of Faith (Lock): It looked for much of her 2-year-old season last year she’d win divisional honors, but she’ll get it this year. A contentious field will await her next week as she elected to receive a bye this week, but she’s solidified her standing no matter how that race goes. Closest pursuer Hot Mess Express races in Indiana this week.

Jujubee (Lock): The complexion of this division changed when Captain Corey went down to injury, and Jujubee has turned heads in recent months. That 1:49.4 win on Hambletonian day was impressive, but his 1:49.3 win when won by daylight last out in the Kentucky Futurity was a thing of beauty. The Breeders Crown is the second consecutive race that he’s paid into as a supplement; at 13 for 16 on the year he’s already done enough to lock up the division.

Bella Bellini, Donna Soprano, Katie’s Lucky Day (Work left to do): I flirted with putting Bella Bellini in lock status, but on further thought it’s conceivable she could be overtaken. She’s only won once since her triumph in the Hambletonian Oaks and that was in the Pennsylvania-sired final. Bella Bellini has raced brave since, but she was beaten by Donna Soprano in the Elegantimage and then surprised by Katie’s Lucky Day in the filly Futurity. If either of those two were to win the Breeders Crown, it might be enough to push them ahead.

Allywag Hanover (Lock): His record speaks for itself. He turned into a beast this season putting it altogether at age 4 with a world record most recently in the Allerage, as well as other big wins in the Mohawk Gold Cup, Canadian Pacing Derby, the McKee, Haughton, and so forth.

Lyon’s Sentinel (Lock): The number one horse in harness racing declined a bye into the final and will enter her Breeders Crown elimination on the heels of a seven-race win streak. A win in the Crown final will further bolster her claim for Horse of Year.

Ecurie D Dk (Controls own destiny): Swedish import made a rousing North American debut last out with his 1:50.4 win in the Allerage at the Red Mile. A supplement to the Breeders Crown, he’s also TVG-eligible at the end of the season. If he wins the Crown, those two wins alone should be good enough for divisional honors. Varenne won this division in 2001, and his lone race in the U.S. was a win in the Breeders Crown.

Atlanta (Lock): Atlanta’s win last out at the Red Mile in which she trotted the co-fastest mile ever by a female in 1:49 (Manchego) sealed the deal.