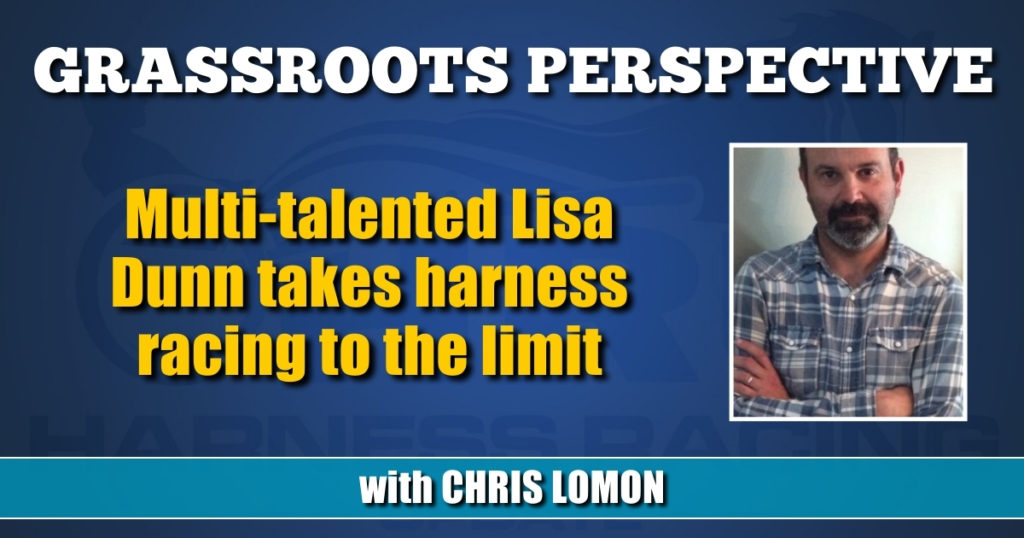 It’s rather ironic that one of Lisa Dunn’s favorite songs is Wasted Time.

There is one thing in particular those who travel with the horsewoman from Cochranton, PA, need to be aware of before they get into her truck: there will be singing.

A playlist staple is the 1976 release Wasted Time by the Eagles.

“I have Sirius XM radio and I’m a singer. If you ride with me, you have to put up with my singing. I’m a big Eagles fan and I have an alert set up. It doesn’t matter what channel I’m on, if an Eagles song comes on, I switch to that. Occasionally, I do books on tape, but that’s for a longer trip.”

Dunn, whose family is synonymous with the Pennsylvania standardbred racing scene, is the furthest from a one-talent horsewoman as you’ll find.

In fact, on any given day, before, during or after the races, Dunn has tackled numerous roles, be it at the barn, on the road or at the racetrack.

“We still breed our own, so we have a band of seven broodmares now, five that are in foal for next season. And then there’s trainer, shipper, and some days, it’s groom and depending on the horse, I still paddock sometimes. I’m on the MSOA (Meadows Standardbred Owners Association) Board – I’m the treasurer there – and I’m president of the Pennsylvania Fair Harness Horses Association.”

Would it have been more appropriate to ask what she doesn’t do?

“I guess that depends on the day,” Dunn said with a laugh.

Days that are usually not easy, and most definitely, long.

“I think the biggest challenge with having so many roles is finding enough hours in the day. There are definitely times that things don’t get done that I would like to see completed that day. The horses come first. They are the income-makers, so I tend to them and their well-being before I delve into any of the other stuff.

“I am also lucky to have some great friends that pitch in to help. Brian Zendt usually keeps a couple of my older racehorses down at The Meadows and trains them there for periods of time so that I don’t have to ship them back and forth each start. I also have Harold and Rebecca Brocklehurst that help me tag team the barn chores at times. If I am at the track, they will make sure mine are fed and watered. Then, if they are racing, I try to return the favor. I am definitely busy, but I don’t want to imply that I am a one-woman show.”

Dunn’s passion for racing and racehorses was established early on her life.

Her father, the late Walter L. ‘Boots’ Dunn, started his association with racing in the 1940s and was a longtime USTA Director. He is believed to be the leading amateur driver of all time, with 1,152 wins. He was a five-time national leader in UDRS for his category of starts.

Dunn’s sister, Leslie, is also in the business.

“My two other sisters, Kathy and Debbie, were maybe the smartest. They stayed out. They are still fans and supporters of the family business, though. For my sister Leslie and I, racing has been around us our whole lives. We each went to college and both of us got our degrees, but we still ended up back in the horse business.”

After school, Dunn worked in the accounting field for four years and after returning home, worked in the same capacity for her family’s construction business.

It was around that time when she began dabbling in standardbreds again.

“Once we closed down the construction company – I think that was back in 2011 – I went back full-time to the horses.”

There are, offered Dunn, a few similarities between racing and accounting.

“Other than the fact that I have to do my own books for the stable, I’m not too sure. But my background in accounting does come in handy. Now that I’m treasurer of the MSOA, I get to use those skills there if need be. I think returning to racing all came to that I just hated being inside and being in an office. That just not the way we were raised.”

Dunn, whose son Wyatt works with her at the barn (her other son Garrett lives in Pittsburgh), is certainly no fair-weather horsewoman. But colder temperatures can, on occasion, make her momentarily question her career choice.

A trip to the winner’s circle, rain or shine, quickly puts those thoughts out of her mind.

“In good weather, there’s not a better job. You get to go to the barn and to be out jogging horses and enjoying the nice weather and beautiful days. When it’s a rainy day or that time of the year, or when winter hits, there are days when you think, ‘Why in the world am I doing this?’ Someone once told me it’s like golf. You can struggle and on one hole, you can hit several bad shots, but when you hit that one good one, you think, ‘Hey I can do this.’ It’s the same thing with racing. There are ups and downs and weeks where you wonder if it’s worth it. But when something good happens, that keeps you coming back.”

Closing in on 200 training wins, consistency has been a hallmark of Dunn’s career.

Complemented by a lifetime UTRS mark of .321 (as of October 18) Dunn continues to be a success story in the Pennsylvania standardbred ranks.

And although she has little time to look at those numbers or take brief pause to reflect on highlights, past or present, she isn’t fazed by the demands of her career.

In her world, there will never be such a thing as wasted time.

“It’s a busy life, but I’m happy that I am able to be part of such a great industry. When I’m not at the track, I just enjoy spending time with friends and family. In the summers, it’s all about the county fairs, and going all around the state for those. I really don’t do a whole lot else outside of racing. But I really don’t have too much to complain about. It’s a pretty good life.”