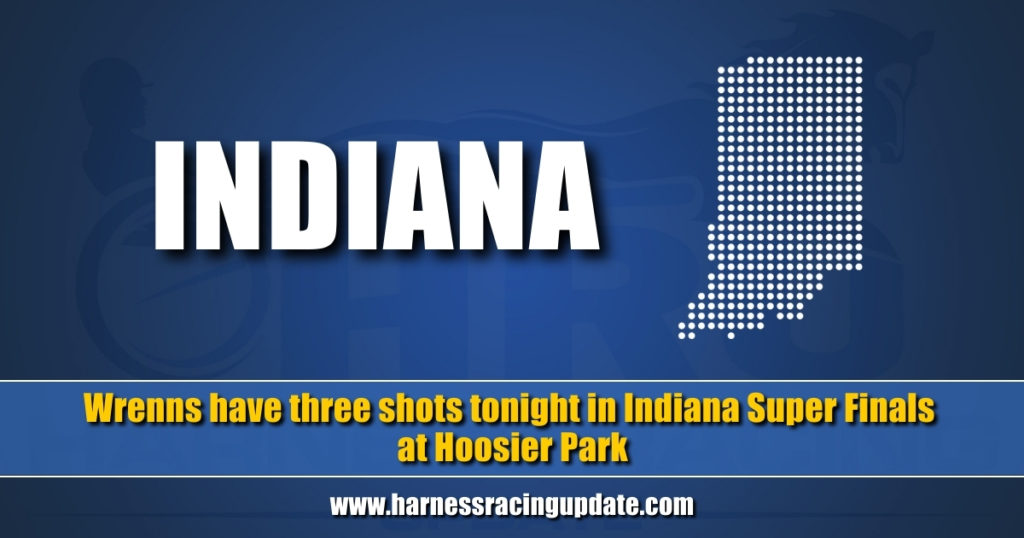 A victory or two at Harrah’s Hoosier Park would be a positive ending to a year in which Peter Wrenn suffered a serious on-track accident.

Tonight (Oct. 15), the top Indiana-sired pacers and trotters will take center stage at Harrah’s Hoosier Park when the track hosts Indiana Sires Stakes Super Finals. A grueling summer of competition culminates in the crowning of this year’s champions. Peter and Melanie Wrenn have experienced the thrill of victory in the Hoosier State’s top program, most recently with Odds On Osiris in 2019. This evening, they have three shots at returning to the winner’s circle in a season that provided its share of twists and turns.

Dave Briggs Peter Wrenn has recovered from a serious accident in June in which he sustained fractures in eight different vertebrae in his back, two fractured ribs and a deep bruise near his hip to go along with various cuts and scratches.

Dean Gillette After turning in a solid freshman campaign, Swingforthefences (Peter Wrenn) returned in 2021 to become one of the more consistent sophomore trotting colts in the state.

After turning in a solid freshman campaign, Swingforthefences returned in 2021 to become one of the more consistent sophomore trotting colts in the state. In 11 attempts at 2, the gelded son of Swan For All hit the board eight times, winning thrice, and finishing third in last fall’s Super Final. This season, he has finished on the board in 12 of 13 starts, claiming six victories and amassing nearly $197,000 for owners David McDuffee and L&L Devisser LLC.

“Maybe he doesn’t always go to the winner’s circle, but he’s never done anything wrong,” Peter Wrenn said of the 3-year-old, trained by his wife. “I don’t think he’s overpowering in there. If you take care of him in the race, it pays off the next start. Sometimes we don’t think about it, but he’s sure been very, very consistent. He really has. He’s not a problem horse, he’s fun to race. He’s a good poor man’s horse. He just keeps getting money and going to work each day.”

The veteran driver has steered Swingforthefences in nearly all of his 2021 starts, but a serious injury in June forced him to the sidelines. The incident occurred on Saturday, June 19 at Hoosier Park in a schooling race following qualifiers. Wrenn doesn’t remember the accident, only the aftermath and path to recovery.

“I’ve been in two wrecks in my life that I don’t remember, and that was one of them. I don’t ask about it. It wasn’t filmed. I don’t care. I really don’t know what happened,” he said. “I remember coming up off the ground. I must have gotten drilled into the ground, and I realized I was hurt. I mean bad. I knew I was. When I got up that day I knew I was seriously hurt.”

The 59-year-old sustained fractures in eight different vertebrae in his back, two fractured ribs and a deep bruise near his hip to go along with various cuts and scratches. The road to recovery required a back brace, a lot of rehab, and patience as Wrenn’s body healed with time.

“I was very fortunate with how I healed up. I healed up quickly. It was a bad one. The first couple of weeks I was very unsure what was going to happen. I wasn’t sure when racing would be involved again,” said the winner of more than 10,000 career races. “I worked my way out of it. It’s all behind me now.”

While he was down, Melanie kept the stable moving forward. Trace Tetrick piloted Swingforthefences in a qualifier and start in the third round of Indiana Sires Stakes, finishing third. Fleurie, a freshman trotting filly just getting her start around the same time, needed more attention. Veteran driver Mike Oosting was asked to help.

“I qualified her the first time before I got hurt. Mike took over and he did a really nice job with her,” Wrenn offered. “I think he got her in the right direction. He got along very well and I appreciate what he did for me. It just felt like me sitting on her. That helped her a lot.”

Oosting guided her through a second qualifier and then two starts over the Hoosier Park oval, including a triumph in the opening round of sires stakes, where she was a two-length winner in a time of 1:56.1. The Muscle Massive filly is owned by breeder M T Pockets Stables.

“She’s a nice filly, but there are a lot of nice fillies in there. I think there’s a little more in there, I think she’s got a chance,” Wrenn said.

As Wrenn returned to the bike — first in a qualifier on July 21 and pari-mutuel competition on July 23 — he focused mainly on the stable’s horses. He won his second start back, and as the summer wore on, he became more comfortable each time out. Swingforthefences continued his consistent ways, and Fleurie claimed divisions in four of six Indiana Sires Stakes rounds, becoming one of the top fillies in the group while earning a little over $140,000. Each secured the points to qualify for tonight’s Super Finals, as did Shirley Goodness, a Swan For All sophomore that the Wrenns campaigned at 2. She returned to their barn in August, and enters the Super Final sixth in points for the partnership of Bill Beechy, Bradley Maxwell and Kenneth Frieder.

The Wrenns will get their first crack at the winner’s circle in the fifth race. Shirley Goodness has drawn post six in the $250,000 final for sophomore trotting fillies. She is 5-2 on the morning line behind favored Swift Swanda, who starts from post four for Erv Miller. Fleurie has drawn post five in the night’s seventh race and is the 9-5 morning line favorite. Swingforthefences has drawn to the outside of favored Brookview Bolt in Race 11, starting from post three as the 5-2 second choice.

“Pacer, trotter, it doesn’t matter. It’s a long haul and you just never know how it’s going to turn out,” he said of the Super Finals. “It will probably be a rainy, muddy night. It usually is. Cold, windy, rainy night.”

Weather.com is forecasting a 60 per cent chance of rain this evening with winds between 10 and 15 mph and a low of 47 overnight. Not ideal racing conditions. But as Peter Wrenn can attest, it could always be much worse. First post is slated for 6:30 p.m.