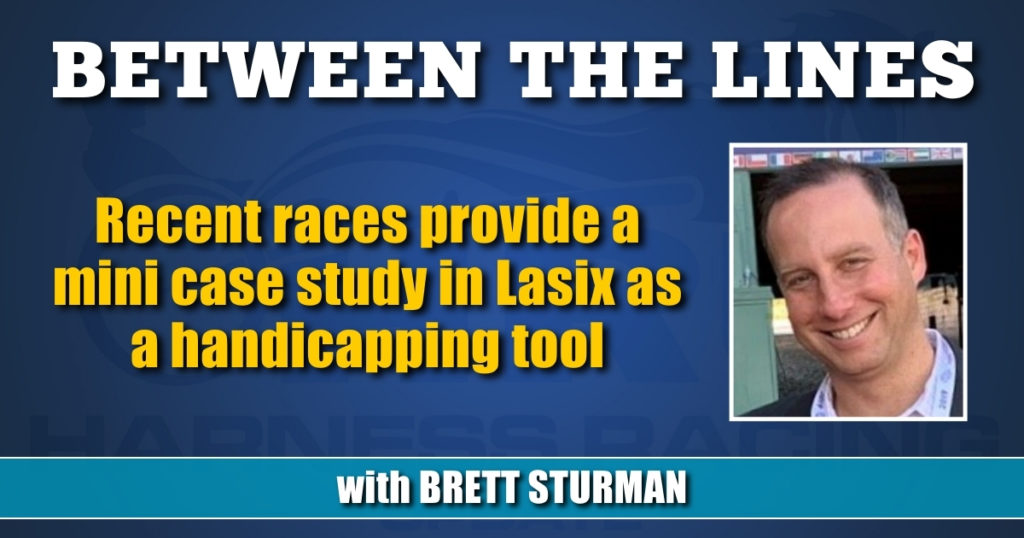 In harness racing, the anti-bleeding medication Lasix isn’t often a prominent topic of discussion when it comes to predicting race performance. Though the use of race-day Lasix is noted in a racing program the same way that it is with thoroughbreds, the use of it is far less prevalent amongst standardbreds and perhaps that’s one reason it’s not a preeminent handicapping tool.

On Kentucky Futurity Day at the Red Mile last Sunday, a rare opportunity was given to see on a relatively wider scale how horses perform that are coming off Lasix from their most recent start. This is because the state of Kentucky bans race-day Lasix for all 2-year-old races and all stakes races, which covered seven stakes races on the Sunday card. Some horses didn’t seem impacted in the slightest, while others did.

One of the more interesting cases was that of Allywag Hanover. A 4-year-old gelding by Captaintreacherous, he’s shown a high-speed ability at the onset of his career as a 2-year-old, was a 1:48 winner last year at 3 and has turned into the best Open pacer this year; always being a super talented horse.

It wasn’t until his second start of this year though that he was put on Lasix for the first time. After losing his first two races on Lasix though still pacing fast times, he then reeled off 8 of 13 including wins in the William Haughton, McKee Memorial, Canadian Pacing Derby and the Mohawk Gold Cup. Now again, this was always a fast horse so it’s not to say by any means that Lasix alone is responsible for what he’s blossomed into – just that it complements his record. The real point is: how would he respond last Sunday now being moved off Lasix? In this column last week, I (foolishly) thought he’d be adversely affected by having to race off Lasix since his first start since May.

Instead of regressing or even racing stagnant, Allywag Hanover paced the fourth fastest race mile in history in 1:46.4, as well as it obviously being a career lifetime best. And the way he accomplished might have been as impressive as any sub 1:47 win. Leaving from post 10, he was parked past an opening quarter in :25.4 and then yielded as they went to the half in :51.3. By three-quarters in 1:19.1 he had been shuffled along the rail and then was repeatedly shifting directions in the stretch looking for room before finally veering to the inside and sprinting away. You could conclude that with or without Lasix, this horse is a monster, and his future Lasix status is negligible when gauging performance.

Another example that closely parallels Allywag Hanover is that of Atlanta. One of the great trotting mares of all-time, Atlanta has raced consistently on Lasix, including every one of her eight starts this year leading up to Sunday. In her two most recent races in Canada, the Maple Leaf Trot and the Armbro Flight, I think it’s fair to say that she wasn’t up to her best which was uncharacteristic of her normal self. How would she race in the Allerage Farms open mare trot coming off a couple of losses and now going off-Lasix for the first time in a long time? Another world record, and one which tied the fastest mile ever for a trotting mare.

Aided by a perfect trip after having dead aim throughout, Atlanta kicked off cover with a :26.3 final quarter to widen away at the wire for a time of 1:49. For reference, no one else in the race closed faster than :27.1. With the return to form and record mile being achieved off-Lasix, she’s another example where at least for one race, she can deliver a top performance with or without the medication playing a factor.

While going off-Lasix certainly didn’t hurt those horses, it did have a different impact for others – even ones from the same barns. Trained by Ron Burke, Atlanta wasn’t impacted in the slightest by the change. But the same couldn’t be said for another Burke trainee, Lou’s Pearlman.

A 1:49.1 winner at Lexington last year as a 2-year-old, Lou’s Pearlman started off this year not at that same level. He eventually found his form which included back-to-back 1:47.4 miles at the Meadowlands, but he could never threaten the best 3-year-olds in major stake races. That all changed in August when Lou’s Pearlman debuted this season on Lasix.

From that point, he went 5-for-5 which was capped off by a relentless first-over win against the great Perfect Sting in the Little Brown Jug final. But on Sunday in the Tattersalls Pace, Lou’s Pearlman was flat. Perhaps it could have been something other than off-Lasix, maybe he simply bounced after racing two heats on the same day a couple of weeks prior or maybe it was moving back to a mile track. At any rate, the way he tired after setting pedestrian-like fractions makes the off-Lasix change notable, especially due to how sharp he got while on it. Unlike Allywag Hanover and stablemate Atlanta, a real case can be made that Lou’s Pearlman thrives on Lasix and you’d have to handicap for that accordingly.

In the Allerage Farms open mares pace, Rocknificent was interestingly the only mare who had already been racing Lasix-free. She won easily as the 30 cents on the dollar favorite, which likely had more to do with her being better than anyone else as is regardless of medication changes from her competition.

And maybe a single race for any of these horses isn’t enough to come to a definitive conclusion. Beads was never a serious threat in the Allerage Farms open trot going off-Lasix, but the last time he went off-Lasix prior was when he won the Hambletonian Maturity. Perhaps his race has more to do with current form as opposed to on-again off-again Lasix use.

Some horses seemingly do better or worse, with or without Lasix, and some don’t seem impacted. Ultimately, Lasix is just one piece of a larger picture and if the results from the Red Mile tell us anything, that perhaps in harness racing it’s even less of a piece than I first thought.