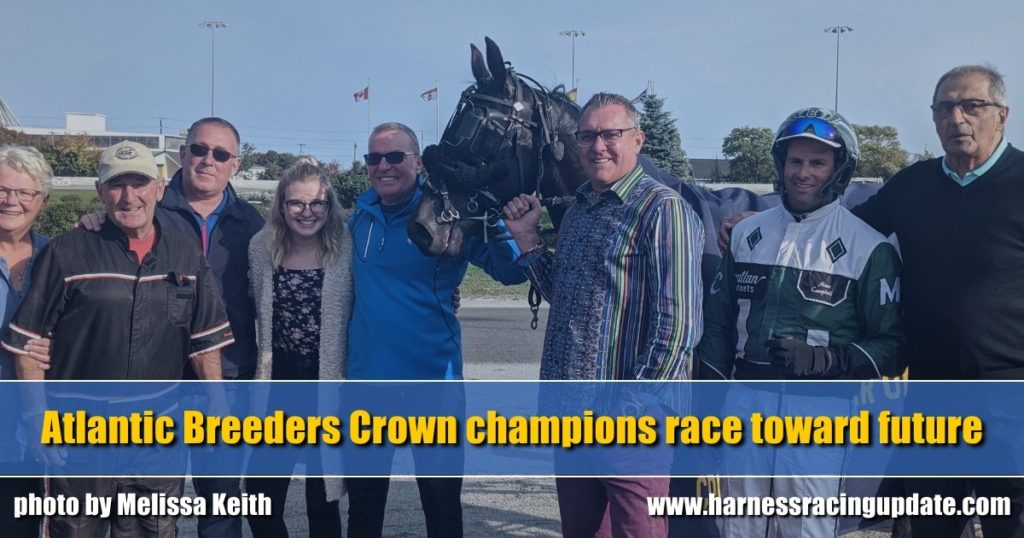 Harness racing is a sport of regional champions, competing in the omnipresent shadow of the Grand Circuit. Not all small-market stars find future success at big tracks, but events like the Atlantic Breeders Crown (ABC) serve to showcase prospects. One well-known example is Waiting On A Woman (6,1:52.2f; $613,336 U.S.), who captured the ABC Two-Year-Old Trot in 2010, later winning multiple open handicaps at Pompano, The Meadowlands, Saratoga, and Vernon Downs. The 13-year-old is still racing at Saratoga, never missing a single season on the track.

On Sunday (Oct. 10) at Red Shores Charlottetown, the newest ABC 2- and 3-year-old trotting champions coasted to dominating victories. Freshman colt Up Helly AA (Armbro Barrister—Burnt With Finesse) took a new 2:01.1h personal best in his ninth seasonal win, opening up by six lengths for driver Ken MacDonald. Another Armbro Barrister son captured the sophomore final: Mr Finlay Ridge (out of Angus Hall mare R Rocket Rachel) won by five lengths in 1:59.3h for his fourth consecutive stakes win. Asked if there was ever any doubt, trainer/driver Clare MacDonald quipped, “Of what?”

Ian Tate of St. Andrews, NS said he, breeder Arnold Rankin, and Clare MacDonald, all owners of Mr Finlay Ridge, would “probably have a discussion after this week” about the gelding’s future plans. “He’s been a great horse for the two years we’ve had him,” said Tate. “He definitely has the best driver and trainer in the area, so we’re glad to be part of it. Hopefully, he’ll carry on to do great in the future for someone. He’s always been hyper and keen on race day, so as long as he stays healthy, he’ll do great… He’s only had one break in his career.”

An accident-marred Two-Year-Old Colt Pace saw heavy favourite Fern Hill General (Brodie MacPhee) and Alldawaytocardigan (Myles Heffernan Sr.) tangled up going into the first turn. While the latter horse was pulled up, Fern Hill General remarkably chased down leader Soul Assassin (David Dowling) from first over, briefly making front at the 57.1 half. When Stash It Away (Corey MacPherson) tipped three-wide from second over, the ‘General’ had no answer. Stash It Away won for the sixth time this year, overtaking a game Soul Assassin in the shadow of the wire, in 1:56.1h.

“My thought was, we’d be the second-best,” said MacPherson, in reference to having post #8. “‘General’ probably would have won it, but you never know in a horse race.”

The outside draw helped Stash It Away avoid the accident, despite interference: “[MacPherson] drove him great, perfect. He had to dodge to get out of the way. He was just lucky he didn’t get involved in that.”

The Three-Year-Old Colt Pace brought together regional-record-setters Woodmere Stealdeal, Dustylanegoliath, and Rotten Ronnie for a highly-anticipated showdown. Just Call Me Doc (Dave Dowling) grabbed early command, but a three-wide Woodmere Stealdeal (Marc Campbell) would swiftly take over, landing on the lead before the opening panel. Dustylanegoliath (Brodie MacPhee) was forced to take back to third, then renew his first-over attack when he couldn’t find room along pylons; Rotten Ronnie gapped his cover, second over in fifth. As Vance Cameron declared at the :55.1 half, “There’s no friends on Atlantic Breeders Crown day!” Justcallmedoc couldn’t keep pace with ‘Stealdeal’, breaking in the pocket just ahead of ‘Goliath’ before the three-quarters. Rotten Ronnie (Redmond Doucet Jr.) was wide enough to avoid interference and get within range of Woodmere Stealdeal, who held him off by half a length in 1:53 flat.

It was the seventh win in 12 starts this year for Woodmere Stealdeal (Steelhead Hanover—Very Ideal Hanover), who went undefeated at 2 for trainer Danny Romo and owners Robert Sumarah and Kevin Dorey. The owners recently welcomed Glenn MacDonald and Frank Brundle to their group. Romo told HRU he was slightly concerned, watching the race: “Well, he took a long time to make front. I saw the quarter in :27 and said, ‘Ohhhh, that’s rough!’ Things happened in the race that shouldn’t have happened [interference], but he was going to give a good race.”

Marc Campbell said he worried about Rotten Ronnie “a little bit down the lane”, but in the winner’s circle, Sumarah called it “a fantastic race” and praised Romo’s conditioning skills. “The owners are very happy and the race went the way I expected,” said the Halifax, NS resident. He said the pacer has three more races between Truro Raceway and Red Shores CDP, before likely heading to Yonkers.

In the ABC Open Mares Pace, Ladylike (Dave Dowling) upstaged pacesetting Woodmere Skyroller and favorite Larjon Legacy in 1:54.2h. The ABC Invitational Pace was a 1:52.1h romp for 2020 Gold Cup and Saucer champ Time To Dance, in line to trainer/driver Marc Campbell. It was the 11th win in 14 starts this year for Brent Campbell and Matthew McDonald’s 5-year-old gelding, who did win a 2021 Cup and Saucer trial, but drew post #8 for the final.

Debbie Francis reflected on the successful Atlantic Breeders Crown and record-breaking Oct. 9 Atlantic Classic Yearling Sale. The Atlantic Sires Stakes executive director observed, “the Maritime-breds have definitely improved since the inception of the ABC. Great horses years ago, but the breeding keeps improving, both stallions and mares.”

The proof is in the weekend’s races, and in the all-time Maritime-bred sales-topper, gelding Woodmere Xspeedia (Arthur Blue Chip—Wild Ride Hanover), purchased by PEI owner Gene Smallman for $68,000. The 103 yearlings sold for $1.7 million before sales tax, surpassing the previous record of $993,500 set last year.