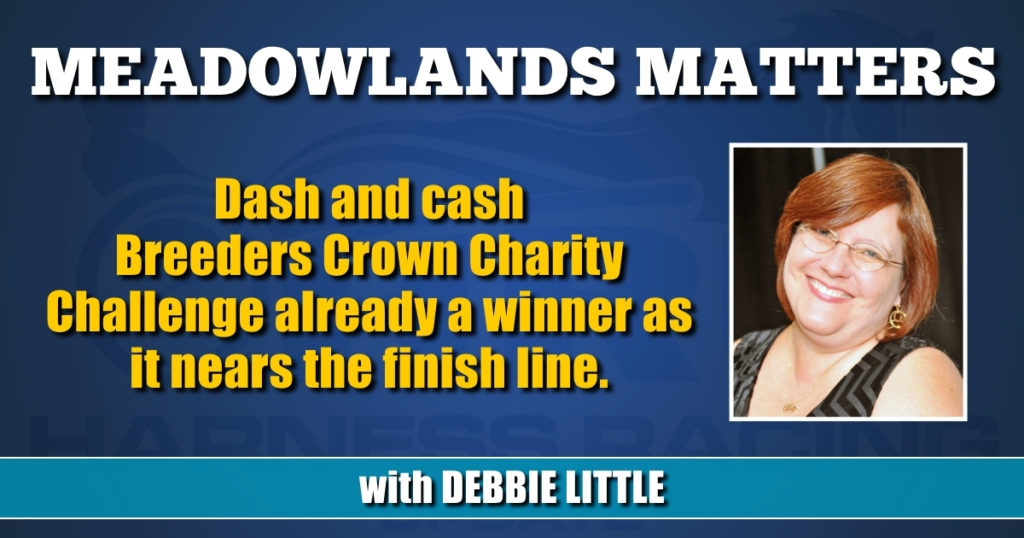 Breeders Crown Charity Challenge already a winner as it nears the finish line.

As the Breeders Crown Charity Challenge nears the finish line, its events last week at the Red Mile were both fun and profitable.

Prior to the race card on Sunday, Oct. 3, representatives from Teams Dunn, Gingras, Miller and Tetrick took to the track for a charity relay race.

“The genesis of the race was to put some emphasis on the stallion auction and remind everyone that it was coming up on the Wednesday,” said Charity Challenge creator Marvin Katz. “We wanted to make sure people were aware of the sale being in the afternoon and that the cocktail party was going to be preceding it. I felt that having something at the Red Mile during the Grand Circuit races right in front of everyone would put the stallion auction front and center.”

Initially, Katz considered just having the four team drivers pull a race bike down the stretch for 100 yards, but then he thought why not make it more fun.

“I thought of doing it with somebody in the sulky, then I thought, let’s put some horsewomen in the sulky and then it occurred to me, let’s really spice it up and let’s switch halfway through,” said Katz.

“You have more of an appreciation for what your horse does, I’ll give you that,” said Julie Miller. “We knew it was for charity, worthy causes and fun and how me and David actually remember the race is we won in our category of 45 and over.”

In its third year, the “Breedings for a Cause” charity auction raised a record $207,000.

“I love what Marvin Katz is doing with the charity event,” said owner Ken Jacobs. “That’s special. And if you can’t give back then what good are you, as far as I’m concerned.”

Jacobs donated a highly-coveted breeding to Walner that went for $55,000 to Brad Grant.

“I have a new saying, ‘If you want to beat a Walner, you better have a Walner’,” said Jacobs.

Ola Yoder’s Kountry Lane Standardbreds bought a Father Patrick at last year’s auction and was happy to take part again this year, getting a Captaintreacherous for $27,000.

The Lexington Selected Sales Company sponsored the cocktail hour before the auction and also sold those breedings commission free, so the net proceeds went directly to the charities.

“From the sales company point of view, we were very happy,” said sales manager/director of operations Dave Reid. “Obviously, as syndicate manager for Walner, I’m very pleased of the price it brought as well.”

The four charities have been doing their part by supporting their team at The Meadowlands, wearing their gear and getting out the vote.

“I know that kids love horses, but I never knew how easy it was to have families come out,” said Michele Hall-Duncan, president and chief executive officer of the enCourage Kids Foundation. “People don’t always think of it as a family event, but The Meadowlands has so many wonderful family activities and when our families were invited out, and I don’t think any of them had ever been to the racetrack, they had so much fun.

“People have said to me, ‘You’re taking kids out to the track?’ I’m like, ‘Yeah, they’re not betting, but they’re eating chili and enjoying festival-like fun and we have to drag them out of there.’ They love the horses. If we have opportunities after this to bring our families out, we certainly will do that.”

Nancy Karole Kennedy, director of development for the John Theurer Cancer Center, is a lifelong resident of Bergen County and has been to The Meadowlands many times in the past, although not since the new building opened, until the Charity Challenge.

Although he’d never been to The Meadowlands prior to the Charity Challenge, Hans Dekker, president of the Community Foundation of New Jersey that hosts the Pandemic Relief Fund, had a great time.

“I think we brought a group of eight and no one had been to the track before,” said Dekker. “I was recruiting for volunteers and people were like, ‘I’ll go, I’ll go.’ They’re all great charities and we’re super happy to be part of the team and may the best place win.”

Staff and athletes from Special Olympics New Jersey have been to every night at the races event that’s been held.

“We’ve had tremendous buy in by our staff and by our constituents for this event so it’s been a lot of fun,” said chief operating officer Bill DePonte. “The coolest thing for our athletes is that professional athletes at that level will engage with our athletes and families. Our athletes love to cheer. They love to root for other athletes. It’s just provided a very unique opportunity that many of our athletes typically would not have had.

The Charity Challenge standings, including Grand Circuit points and charity nights at the races, as of October 12 are:

Fan voting runs through Oct. 29 – as do the Grand Circuit races – so there are still more chances to earn points prior to the Oct. 30 announcement of the Charity Challenge champion. Fans can vote at: https://www.playmeadowlands.events/bc

“I think the good will that we have established and will have created, that lasts for a long time,” said Katz. “And it needs to be the example. It needs to be what we should aspire to do on a regular basis throughout our industry.”