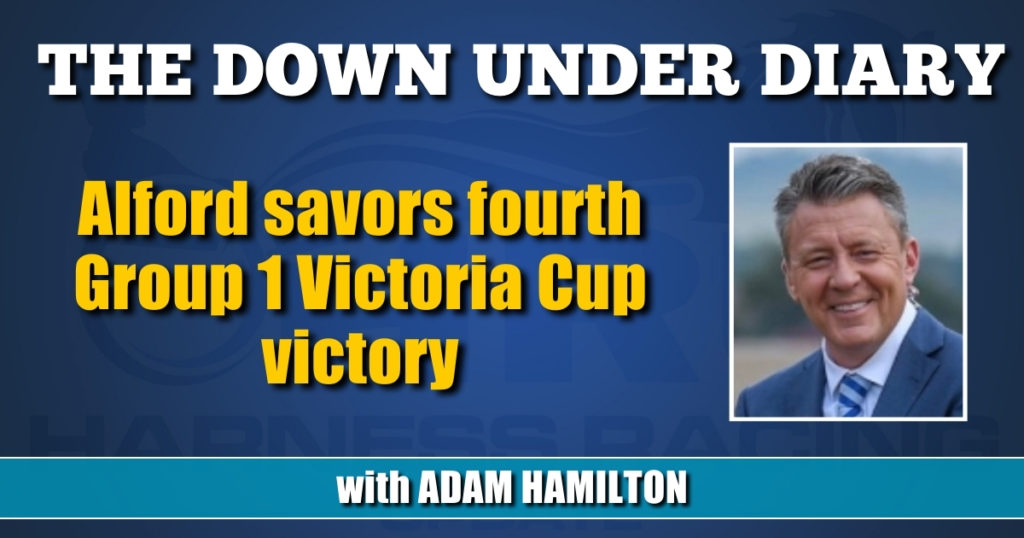 When you’re 53 and have been driving for 38 years, the feature wins just mean that little bit more.

Chris Alford has done it all. He is genuine Hall of Fame material, has won more races than any other driver Down Under and boasts just about every major race that matters on his stellar CV.

But, as he drove home from Bendigo on Saturday night (Oct. 9) after winning his fourth Group 1 Victoria Cup on Max Delight – one of just seven Grand Circuit races Down Under – felt extra special. It was something to savor.

“The unexpected nature of it added to it all as well,” Alford said. “It’s not as if I went there expecting to win, or even thinking I had a real winning chance to be honest. I knew he’d be competitive, but I thought top five would be a great result.”

“I didn’t think we could get across Torrid Saint, who was drawn inside, but Max (Delight) felt awesome on the gate and absolutely shot out. When he crossed, I could then sit on Amazing Dream and It put me right in the mix.

“Ants (Anthony Butt) really ran along in front (on Amazing Dream), obviously driving to beat his main danger, King Of Swing, from his back row draw, but it also played into my hands.

“I was pinching myself around the home bend. I looked around and everything was off the bit, but I had plenty of horse left and was swinging against him. It was over as soon as I got into the sprint lane.”

It was a great training performance by David Aiken, the friend of so many in the U.S., given Max Delight’s history and less-than-ideal build-up. The 5-year-old won the Group 1 NSW Derby at 3, but missed his 4-year-old season with injury.

Even more concerning, the son of Bettors Delight was scratched from his final lead-up race just a week before the Victoria Cup with a hoof abscess.

“It just shows what a great horseman ‘Aikey’ (Aiken) is,” Alford said. “It’s the third Victoria Cup we’ve won together, the other two were with Lennytheshark (2016 and ’17) and Aikey had to nurse him through plenty of issues as well,” Alford said.

We have all seen those moments in different sports when a person stands alone and completely dominates.

Australian harness racing has that right now with, but with two people – the powerhouse Victorian training duo of Emma Stewart and Clayton Tonkin.

It was on full display at Bendigo’s huge Victoria Cup meeting.

Stewart and Tonkin took 22 horses to the Bendigo track – that’s over 18 per cent of the runners across the entire meeting – and completely dominated three of the major races – the Group 1 Victoria Derby, Group 1 Victoria Oaks and Group 2 Vicbred Home Grown final for 2-year-old fillies.

In the $A200,000 Derby, the first four 3-year-old pacers across the line were trained at Stewart and Tonkin’s property near Ballarat, about 90 minutes outside Melbourne. Act Now, a brilliant son of Somebeachsomewhere, led throughout to easily win the Derby in a slick 1:55 mile rate for the long 2,650m distance. Blitzern, trained by their stable foreman Allan McDonough ran second, while Longfellow and Major Moth third and fourth.

Just a race later, then snared first, second, third and fifth in the Victoria Oaks.

The winner, Ladies In Red, has won 13 of 14 starts and finished second in the other. She’s one of the best fillies we’ve ever seen in this part of the world. And she’s got strong North American ties, being by Mach Three out of former U.S. mare Kabbalah Karen (by Western Terror).

Just to round-out the monstrous night, Stewart and Tonkin snared the trifecta in the Home Grown 2YO Fillies’ Classic with Bettors Delight filly Jo And Jo beating Rich Beauty and Fiamma.

The daughter of Donato Hanover speared to the front in a :26.8 opening split and held-off former NZ mare Funky Monkey, who stalked her everywhere, to win by a head in a 1:52.7 mile.

It was just 1.2 sec outside the Australasian race record set by the now Swedish-based mare Maori Time, set in February, 2018.

“If she keeps progressing, she’ll get her chance in the bigger races early next year, but for now there’s another couple of mile races at Menangle for her to get some more experience in,” part-owner Duncan McPherson said.