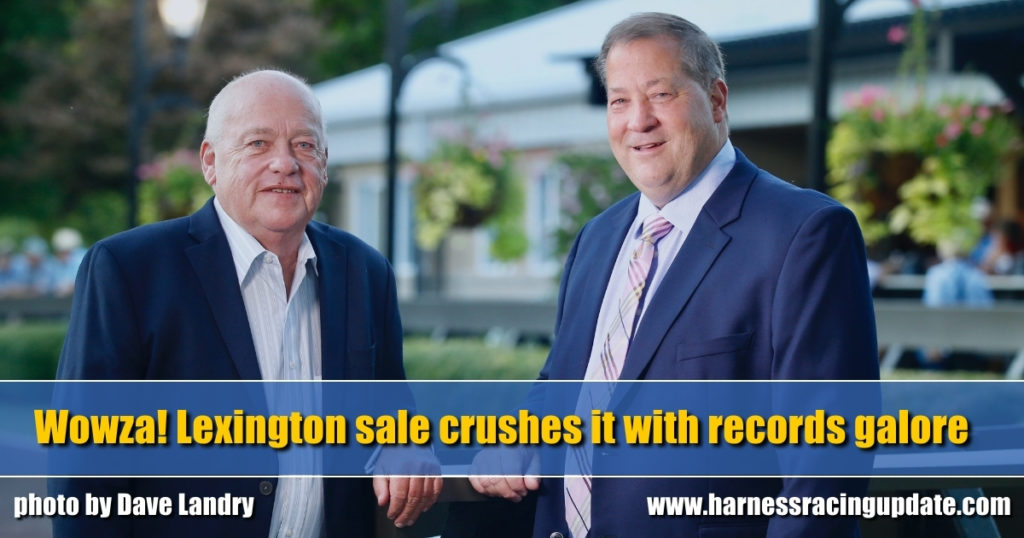 The Lexington Selected Yearling Sale concluded Saturday with records for gross, average, median and number of six-figure yearlings sold — and topped the previous best gross by more than $10 million. In all, the sale set 18 sales records, including surpassing $5 million for the first time in a final session.

Each of the five sessions set a new record for gross sales.

Dave Landry Sale managers Randy Manges (left) and David Reid put together a sale that grossed over $56 million, surpassing the previous record, set in 2019, by some $10 million.

Adam Ström Hip 62 Exile, a Walner filly out of Swan Hot Mama, topped the sale by selling for $800,000 on opening night to Nancy Takter out of the Diamond Creek consignment.

Adam Ström Leading buyer Nancy Takter and Adam Bowden of Diamond Creek, the farm that sold the sale topper and finished as the sale’s fourth leading consignor by gross sales.

Adam Ström The third highest priced yearlings was hip 54 Earthquake Bi, a Walner colt out of Dream Child that sold to Walner’s owner Ken Jacobs for $620,000 from the Hunterton consignment.

“I think everybody used the word, ‘Wow’ so I’ll just piggyback on that,” said Diamond Creek owner Adam Bowden. “I think the market is good, the amount of money to race for is good, the stallions are good, the pedigrees were good and the physicals matched and people were happy to pay money for the good ones.”

Randy Manages, who manages the sale with David Reid, was philosophical about the results.

“This is my 29th sale. Of course, when I came to work here it was Kentucky Standardbred. When we merged the two sale companies, several years ago, I think that really helped everybody,” Manges said. “Obviously, we have some great farms in this area and that’s helped. Our breeders, they have always improved their broodmare bands, which helps us. I’m a big believer that the consignors have built the sale over the years. It’s probably been the last five years that it’s just progressed. When good things happen in the industry, it just seems to help us. We’ve really grown. We have a great group of people that come to the sale and participate in the sale. The last couple of years with COVID and everything, you would think that would hurt us, but with online bidding it was a big savior last year and it really stepped up this year also.”

“It was very strong from top to bottom,” Manges said. “In fact, I was hoping we would progress the way it progressed and it worked out for us. There were a lot of guys that came in for our last two days and stayed. We had a good crowd right up until the last horse sold tonight, which is a very positive thing for the industry. I think it will carry through for the rest of the year. I think Harrisburg will have a good sale and some of the regional sales that have not taken place yet will feed off the good sale we’ve had. We seem to feed off – when all the sales are good, we seem to do even better.

Reid said he was delighted with the results.

“We averaged $35,000 tonight. That’s a record for the last night of the sale. It was up 20 per cent on the average from last year and 50 per cent over two years ago,” Reid said. “It’s just a phenomenal way to end the night.”

Manges added, “The one good thing about this sale, in particular, is that the breeders have great mares and when they get bred to those kind of horses that are in high demand then you see these high prices.”

The session topper was hip 757 Country Line Cred, a Downbytheseaside colt out of Tookaloo Hanover purchased for $230,000 by Diamond Creek Farm from Reid’s Preferred Equine consignment.

“For us, he was the best colt in the sale and we’ve made so much money with Seaside so far that we wanted to come here and buy what we thought was the best one. I’m happy to do that,” said Bowden.

Reid said the colt was bred and raised by Dr. Steve Dey from Heritage Farms in New Jersey.

“They’ve been around a long time. They sold a Downbytheseaside down here last year quite well. They are a small, boutique type of breeder. We brought three or four yearlings down here to pick the big spots and I’m very happy for their success. To see them come down here and maybe take a chance on my suggestion, then to sell the sales topper is awesome.”

Diamond Creek stands Downbytheseaside in Ohio at Sugar Valley Farm. Bowden said the success of the stallion at this year’s sale was expected.

“I don’t want to be cocky, but it was sort of expected that they were going to do well. Sea Silk winning last week, Pebble Beach, the sale in Ohio… I’m just thrilled. The horse has done it all and we’re riding the wave,” Bowden said.

“The top seven yearlings sold tonight were Downbytheseasides and they were all over $100,000. I just think that it’s great to see a young sire get off to a start like that,” Reid said.

Hunterton’s Steve Stewart said it was the right decision to sell all the Downbytheseasides on the final night.

“They wrote about whether they should have the Seasides sell earlier and absolutely not. You had Hannelore Hanover’s full-sister (sell earlier) and that’s fine. But I think the crowd was bigger tonight than it’s been all week almost. It’s a different crowd, which is important, but I don’t think there was hardly any of them that we were disappointed in all the way through. It was very rewarding,” Stewart said.

Burke said the attraction was the Ohio program.

“We didn’t get enough bought at the previous sale and we need a strong bunch to race as much as we like to race in Ohio, so it’s good for us to only ship a couple of hours a day to either of our farms. We’ve got the best young driver there and Chris (Page) does a great job educating them… it’s really been successful, so there was no way we weren’t going back,” Burke said.

As for Downbytheseaside in particular, Burke said having one race on the Grand Circuit is possible, “but the biggest thing is that we want to race in Ohio. The program is great and it’s set up that there’s plenty of races between the Sires Stakes, the state fair, the breeder’s championship… there’s plenty and you don’t need to worry about racing anywhere else.”

Keeping it in Ohio, HRU also checked in with owner Greg Luther who last year launched his “million dollar experiment.” Luther said the experiment continues, but will be a little different in 2022.

“We had a great year so far this year, still some big races coming up. We’ve brought in a little over $2 million in purses, so that’s been fun and we’ve won some big races,” Luther said. “Obviously, Catch The Fire has been the star so we’ve had fun there and we’re starting to get into the breeding business as well. We’re buying a bunch of babies and I’ve got pretty close to 30 2-year-olds so far. The Harrisburg sale is still coming up and I’ll buy a bunch of broodmares, too, that we can breed to Catch The Fire.

“We’re Ohio, born and bred, ourselves so we’re trying to get as many Ohio-breds as we can… and, heck, they are starting to take the big stage, too. They are winning some Grand Circuit races.”

“It’s been a lot of fun and obviously we’re going in pretty big. We’ve probably put another $2 million in so far this year, trying to hit the big time.

“I’m just trying to convince everyone to keep building barns for us, so we have enough space to store these things – I’m at 70 head now. I own 69-and-a-half of those. I only have half of Catch The Fire. That horse, he’s got so much fight in him and I’m hoping that goes on to his babies as well. So, we’re really going to go big on breeding him.”

“For Preferred Equine, I think we’re the leading consignor again, but that’s just a number,” Reid said. “The service to our clients and the service to the industry. We pride ourselves on making a professional presentation and hope it pays dividends for everybody. We hope our customers are satisfied and, more importantly, we appreciate their trust in us to sell their horses for them.”

“I always say that the breeder takes the biggest risk of anybody, because what we do now, we get paid three years from now. You’re really projecting success. It’s like the wine business where you’re projecting future profits. The people buying horses might get money back in nine months and that’s a big difference.”

“Now, as we always conclude, we just want these horses to go on and perform on the racetrack,” Reid said. “The Lexington sale has done that year after year. They give you Classic winners, Triple Crown winners, Hambletonian winners, Breeders Crown winners. We pride ourselves in selling winners and that’s basically the success of our sale.”