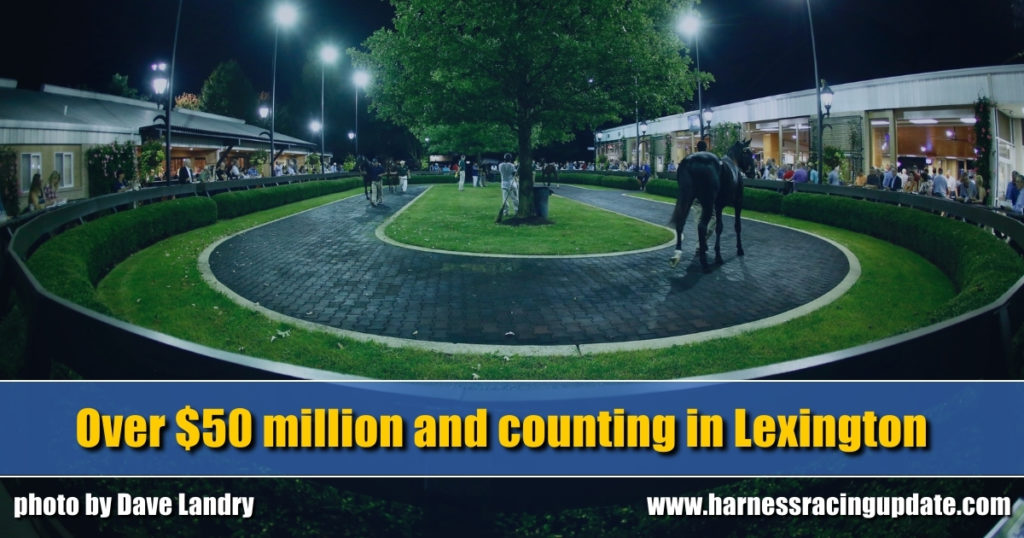 Over $50 million and counting in Lexington

Thanks to another record-breaking session on Friday night, the Lexington auction is pushing farther into unchartered territory going into tonight’s final session.

As for breaking $50 million, Reid said, “I’ve been wrong the last 10 years. I’m always on the conservative side and I think experiencing it is gratifying for everybody.

“Each time you go on the road in the spring time and you talk to your breeders and you talk to your consignors and start the whole process, then, you see the building blocks and to have them come to fruition and sell like this, and be received like it is, that’s very gratifying for Randy and myself.”

Friday set records for gross and average for a fourth session, making it the fourth straight record-breaking session this year.

Total gross through four nights is now $51,407,000 with 148 yearlings to sell tonight in the final session.

“The train is rolling along just like it has been,” said Reid. “Tonight, I thought the energy was very good again. We had new faces come into town. Tonight was where technology takes over a bit – the online bidding ramped up and 17 per cent of the horses sold tonight were sold online. A lot of people were here earlier in the week and did their inspections, then had to go home or go race horses. You got new faces that came in today for the weekend. You have people looking horses for their clients or agents for trainers that are remote or bidding online.

“The live factor here, there was good energy, good crowd and then you put in the online, there’s really no reason you can’t buy the horses. Whether near or far, you can do that.”

Friday’s sale topper was hip 624 Kountry Jon, a Father Patrick colt out of Caddie In Love S sold by Anvil and Lace for $200,000 to Philip Scott of New Jersey.

Scott said deserved to be sold earlier in the sale because of his European pedigree.

“It’s very well known in Europe. It definitely stood out on the fourth day here,” Scott said. “We bought him for our barn with Trond Smedshammer. We had a couple of clients from Europe interested in the horse. First of all, the horse looks incredible and has an incredible pedigree, especially known for Europeans. Not as known over here, but he had Ready Express in the pedigree and it’s just tremendous.

“We were prepared to go to that limit. We kind of thought it would end up a little bit lower, but I’m just glad we got it.

“I would say that the others bidding against me were European trainers. I know a couple of the Swedish trainers were interested in the horse, as well.”

Anvil and Lace’s Beth Yontz said she was excited Kountry Jon went for $200,000.

“I knew the Europeans would be on him, simply because of his bloodlines. I was disappointed when they put him on the fourth night, but I’ve talked to Randy Manges many times and if they want a horse they are going to find him – it doesn’t matter what stall, what barn, what consignment, what hip number. So, when we got here and started showing there was a lot of European interest.”

Hip 683 American Cruiser, an American Ideal colt out of Lady Captain, sold for $140,000 to Megan Scran, agent for Greg Luther, out of the Brittany Farms consignment.

Tonight’s fifth and final session of the Lexington Selected Yearling Sale will feature 148 yearlings mostly from Ohio and Indiana. It begins tonight at 7 p.m. at Fasig-Tipton.

“Similar to last year, you’re going to have good energy here,” Reid said. “There’s a lot of nice horses, some regional program horses… Downbytheseaside is a regional sire, but has also proven to be a Grand Circuit sire, which is a great thing for the sport.

“It’s going to be a good night. There’s a big day of racing tomorrow and we’ll just look to conclude a very good weekend of the Lexington experience – sales, racing. The weather was beautiful today and I’m excited to come in tomorrow night and start the show.”

For more information about the sale, please visit: http://www.lexingtonselected.com